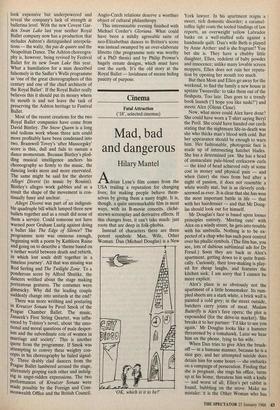 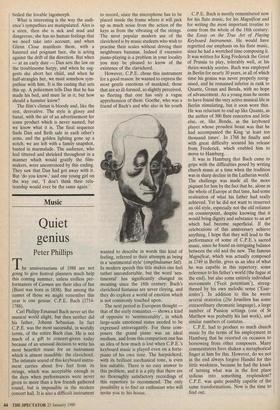 Adrian Lyne's film comes from the USA trailing a reputation for changing lives; for making people behave them- selves by giving them a nasty fright. It is, though, a quite unremarkable film in most ways, with its B-movie conceits, cliché- strewn screenplay and derivative effects. If this changes lives, it can't take much: just roots that are deep in folk-phobia. Instead of characters there are three potent symbols: Man, Wife, Other Woman. Dan (Michael Douglas) is a New `OK, which is it to be?' York lawyer. In his apartment reigns a sweet, rich domestic disorder; a caramel- toffee light coats the tooled bindings of law reports, an overweight yellow Labrador basks on a well-stuffed sofa against a handmade quilt. Dan's wife Beth is played by Anne Archer: and is she fragrant? You bet she is. They have a chubby little daughter, Ellen, redolent of baby powder and innocence; unlike many lovable screen moppets, Ellen does not ruin her reputa- tion by opening her mouth too much.

But then Mom and Ellen go away for the weekend, to find the family a new house in upstate Tweesville: to take them out of the fleshpots. Too late. Dan goes to a trendy book launch CI hope you like sushi?') and meets Alex (Glenn Close).

Now, what more could Alex have done? She could have worn a T-shirt saying Beryl the Peril. She could have handed out cards stating that the nightmare life-in-death was she who thicks man's blood with cold. But her appearance should be enough to warn him. Her fashionable, photogenic face is made up of intersecting hatchet blades. She has a determined jaw. She has a head of immaculate pale-blond corkscrew curls — the kind of head achieved only at some cost in money and physical pain — and when (later) she rises from bed after a night of passion, it does not resemble a white woolly mat, but is as cleverly cork- screwed as ever. It is clear that she has won the most important battle in life — that with her hairdresser — and that Mr Doug- las should look out for himself.

Mr Douglas's face is based upon looser principles entirely. 'Meeting cute' with Alex on a windy street, he gets into trouble with his umbrella. Nothing is to be ex- pected of a chap who has such poor control over his phallic symbols. (The film has, you see, lots of dubious subliminal ads for Dr Freud.) Soon they are back in Alex's apartment, getting down to it quite franti- cally. Curiously, their love-making is play- ed for cheap laughs, and features the kitchen sink; I am sorry that I cannot be more explicit.

Alex's place is so obviously not the apartment of a little homemaker. Its rum- pled sheets are a stark white, a brick wall is painted a cold grey; in the street outside, butchers carry joints of meat. Madam Butterfly is Alex's fave opera; the plot is expounded (for the drive-in market). She breaks it to her partner: 'I'd like to see you again.' Mr Douglas looks like a hamster threatened by a tomahawk. Later we hear him on the phone, lying to his wife.

When Dan tries to give Alex the brush- off — in a humane manner, because he is a nice guy, and her attempted suicide does detain him for some hours — she embarks on a campaign of persecution. Finding that she is pregnant, she rings his office, turns up at his home, threatens him with a knife — and worst of all, Ellen's pet rabbit is found, bubbling on the stove. Make no mistake: it is the Other Woman who has boiled the lovable lagomorph.

What is interesting is the way the audi- ence's sympathies are manipulated. Alex is a siren, then she is sick and mad and dangerous; she has no human feelings that we need take into account, and when Glenn Close manifests them, with a haunted and poignant face, she is acting against the drift of the direction. But when — at an early date — Dan sets the law on the troublesome harpy, and when he sug- gests she abort her child, and when he half-strangles her, we must somehow sym- pathise with him. It is the casting that sets this up. A policemen tells Dan that he has made his bed, and must lie in it; but how should a hamster know?

The film's climax is bloody and, like the rest, derivative. The style is glossy and banal, with the air of an advertisement for some product which is never named; but we know what it is. The final sequence finds Dan and Beth safe in each other's arms, and the golden lighting gone up a notch; we are left with a family snapshot, basted in marmalade. The audience, who had tittered and shrieked throughout in a manner which would gratify the film- makers, were unconvinced by this ending. They saw that Dan had got away with it. But 'do you know,' said one young girl on the way out, 'I don't think their rela- tionship would ever be the same again.'