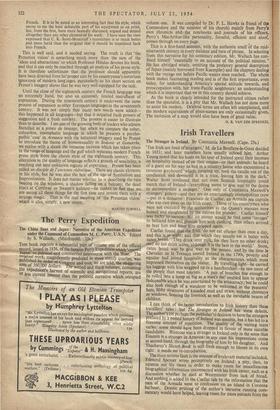 The China Seas and Japan : Narrative of the American

Expedition under the Command of Commodore M. C. Perry, U.S.N. Edited by S. Wallach. (Macdonald. 25s.) THIS book reprints a substantial part of volume one of the official record, issned in 1856, of the famous Perry Expedition which•oponed Japan' to political and commercial intercourse with the West. The tni6ta41 wurk, magnificently produced in three stately quartos, was published by ordet-oc-Cons,ress and cost, we are told, the staggering sum of 360,000 dollars. The teeond and third volumes, containing the expedition's harvest of scientific and navigational reports, are of less current interest than the political narrative which occupied volume one. It was compiled by Dr. F. L. Hawks (a friend of the Commodore and the minister of his church) mainly from Perry'l own chronicle and the notebooks and journals of his officers. Perry's MacArthur-like personality, forceful, efficient and aloof, comes through on every page. This is a first-hand account, with the authentic smell of the mid- nineteenth century in every incident and turn of phrase. In selecting from this narrative for his centenary edition, Mr. Wallach has con- fined himself 'essentially to an account of the political mission., He has abridged wisely, omitting the prefatory general description of Japan (mainly borrowed from Kaempfer) and the chapters dealing with the voyage out before Pacific waters were reached. The whole book makes fascinating reading and is of the first importance, even today, for understanding America's special attitude towards, and preoccupation with, her trans-Pacific neighbours: an understanding which it is important that we in this country should achieve.

As the book is clearly intended for the instructed citizen rather than the specialist, it is a pity that Mr. Wallach has not done more to assist his readers. Oriental terms are often left unexplained, and the modern equivalents of place-names are only occasionally given. The inclusion of a map would also have been of great value.