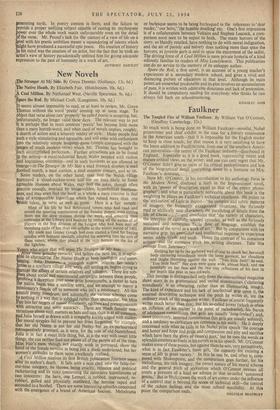 The Tangled Fire of William Faulkner. By William Van O'Connor. (Geoffrey Cumberlege. 32s.) So much work is being done on William Faulkner—novelist, Nobel prizewinner and chief exhibit in the case for a literary renaissance in the American south—that it is impossible for the English reader to keep in close touch; for that reason it is very, satisfying to have the latest addition to Faulkneriana, from one of the southern Ameri- can universities—the centre of the Faulkner industry—distributed in England. Especially as it is a good book, representing recent and mature critical views on the.writer, and one can only regret that Mr. O'Connor didn't give us more of his critical perceptiveness and less of the biographical detail (everything down to a footnote on Mrs. Faulkner's dentures.

Now Mr. O'Connor, in his introduction to his anthology Form In the Modern Novel, disclosed a faith in the Impressionist novel, with its 'power of description equal to that of the expert photo- grapher' ; and what is particularly noticeable about this book is the weighting he places on Faulkner's technical excellence. He points to the stylization' of Light in August—' the complex and subtle patterns of imagery, the frequently exaggerated situations, the furiously mad or idyllically sane characters, the paralleling of details from the life of Christ . . .9—and concludes that the variety of characters, the interplay of carefully selected episodes, as well as the furiously sustained and sometimes facile flow of language, establish the greatness of the novel as a work of art.' But by comparison with his narrative grip, his emotional and intellectual response to experience seems oddly crude and weak. Hence the contrast of his conscious artigry and the excessive pitch his writing discloses. Take this panage from Sanctuary:

Holding her up by the gathered wad of coat he shook her, her small body clattering soundlessly inside the loose garment, her shoulders and thighs thumping against the wall. You little fool!" he said. "You little fool!' Her eyes were quite wide, almost black, and the lamplight on her face and the two tiny reflections of his face in her pupils like peas in two inkwells. •

This passage is distinguished only from the conventional magazine short story in its grammatical and verbal eccentricities (' clattering soundlessly' is an obscuring, rather than an illuminating, image). The kind of experience and his lack of intellectual grip upon it, the external descriptive technique and the pitch he writes at, are the ordinary stock of the magazine writer. Faulkner of course frequently writes much better than this; but his so-called power (which is often an inflation of his matter to the point of melodrama), his bursts of adolescent romanticism (his girls are usually 'long-limbed') and, more commonly, inverted romanticism (his girls are usually seduced), and a tendency to caricature are common in his work. He is deeply concerned with what he calls in his Nobel prize speech 'the courage and honor and hope and pride and compassion and pity and sacrifice which have been the glory of (man's) past,' but he uses the words as splendid counters as freely in his novels as in his speech. Mr. O'Connor makes some of these points, but against them he sets, very perceptively, what is in fact Faulkner's basic gift, 'the capacity for creating a sense of life in great variety.' In this he can be, and often is, com- pared with Shakespeare, and the comparison goes further, for his melodrama, his rich imagery, the covert nature of his moral scheme and the general pitch of stylisation which O'Connor stresses all create a pressure of a kind we admire in that so-called 'untutored genius.' But in Shakespeare the work of art comes under the influence of a control that is beyond the scope of technical skill—the control of the richest feelings and the most refined sensibility. At this point the comparison ends. MALCOLM BRADBURY