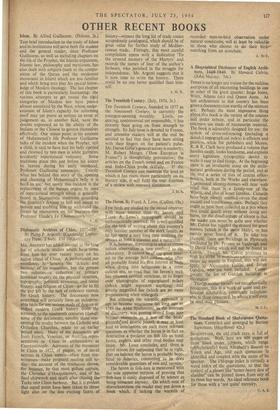 Islam. By Alfred Guillaume. (Pelican. 2s.) THIS brief introduction to the study of Islam andits institutions will serve both the student and the general reader, since Professor Guillaume, as well as including chapters on the life of the Prophet, the Islamic expansion, Islamic law, philosophy and mysticism, has also dealt with subjects (such as the compo- sition of the Quran and the modernist movement in Islam) which are less familiar and which bring into play his special know. ledge of Moslem theology. The last chapter of this book is particularly fascinating: the various attempts to get round the rigid categories of Moslem law have passed almost unnoticed by the West, whose under- estimate of Islam's capacity for reforming itself may yet prove as serious an error of judgement as, in another field, were the doubts expressed as to the ability of the Indians or the Chinese to govern themselves effectively. One minor point: in his account of Muhammad's life Professor Guillaume talks of the incident when the Prophet, still a child, is said to have had his belly opened and cleansed by two men in white garments (evidently supernatural visitants). Some traditions place this just before his ascent to heaven during his early manhood. Professor Guillaume comments: 'Exactly what lies behind this story of the opening and cleansing of Muhammad's belly it is hard to see,' but surely this incident is the replacement of the human organs by, ones of supernatural strength which is generally found in Shamanistic traditions preceding the Shaman's descent to hell and ascent to heaven and enabling him to withstand the forces he encounters on his journeys (see Professor Eliade's Le Charnanisine).