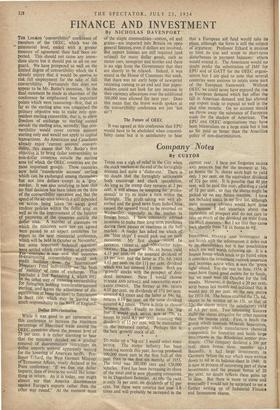 THE Lonion 'convertibility' conference of Members of the OEEC, which was on Ministerial level, ended with a greater tneasure of agreement than had been ex- pected. This should not cause any imme- diate alarm but it should put us all on our guard. We have prospered so well on the limited degree of convertibility which the £ already enjoys that it would be unwise to risk full employment for the sake of full Convertibility. Fortunately this does not appear to be Mr. Butler's intention. In the final statement he made as chairman of the conference he emphasised two important points which were reassuring—first, that as far as the sterling area was concerned the primary objective was to make only non- Msident sterling convertible, that is, to allow freedom of exchange to sterling earned outside the sterling area, secondly, that con- vertibility would cover current account sterling only and would not apply to capital transactions. As Americans and Canadians already enjoy 'current account' convert- ibility, this means that Mr. Butler's first objective is to bring dollar convertibility to non-dollar countries outside the sterling area (of which the OEEC countries are the MOM important group). These countries bow hold 'transferable account' sterling which can be exchanged among themselves but not into dollars except in a 'grey' market. It was also satisfying to hear that no final decision has been taken on the date Of the convertibility operation and that the Speed of the advance towards it still depended On action being taken `to adopt good Creditor policies within the dollar area' as well as on the improvement of the balance of payments of the countries outside the dollar area. A number of questions on which the ministers were not yet agreed Were passed to an expert committee for report to the next ministerial conference, which will be held in October or November, but some important technical questions were settled which raise points of principle. Por example, it was said that countries re-esia onsning convertibility would seek credit facilities from the International Monetary Fund Individually on the basis of 'stability' of rates of exchange. This Precludes a free fluctuating £, which may be the safest way of restoring convertibility for foreigners holding transferable-account sterling, and leaves the adjustment of dis- equilibrium at home (as now) to fluctuations In Bank rate, which may be leaving too much responsibility to the sant( of-England.

While it was good to get agreement at this conference to increase the minimum percentage of liberalised trade among the °MEC countries above the present level of 75 per cent, it is rather alarming to hear that the ministers decided on a gradual removal of discriminatory restrictions on dollar imports without apparently waiting for the lowering of American tariffs. Pro- fessor Erhard, the West German Minister oftconomie Affairs, wisely declared at his Press conference: 'If we free our dollar imports, then of course we would like some- thing in return. As it is today, one might almost say that America discriminates against Europe's exports rather than the other way round.' At the moment most of the staple commodities—cotton, oil and grains—are imported into Britain on open general licences, even if dollars are involved. But import licenses are still required (and refused) for many dollar goods, such as motor cars, newsprint and textiles and there is no sign from the Government that they are shortly to be relaxed. Indeed, it was stated in the House of Commons this week, that there was no early hope of newsprint rationing coming to an end and that paper- makers could not look for any increase in their currency allocations over the additional 100,000 tons allowed for next year. Does this mean that the brave words spoken at the convertibility conference are just 'hot air'?

The Future of OEEC It was agreed at this conference that EPU would have to be abolished when converti- bility came but it is satisfactory to hear that a European aid fund would take its place, although the form is still the subject of argument. Professor Erhard is anxious to limit its size and scope to short-term disturbances in payment balances: others would extend it. The Americans would no doubt prefer the substitution of IMF for EPU and of GATT for the OEEC organi- sation but I am glad to note that several countries were anxious to retain some part of the European framework. Without OEEC we could never have enjoyed the rise in European demand which has offset the fall in American demand and has allowed our export trade to expand so well in the past nine months. On no account should we throw away the substance of European trade for the shadow of American. The EPU and OEEC organisations may have been bilateralism on a large scale but it has so far paid us better than the American policy of non-discrimination.