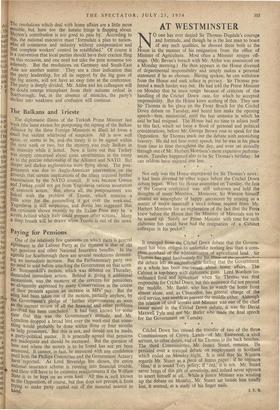 One of the relatively few questions on which there is general agreement in the Labour Party at the moment is that of old age pensions and other National Insurance benefits. In the agenda for Scarborough there are several resolutions demand- ing an immediate increase. But the Parliamentary party saw no need to wait before attacking the Government on that score. Dr. Summerskill's motion, which .was debated on Thursday, demanded immediate action. Behind it, giving it additional momentum, was ,the mernory of the concern for pensioners ,0 eloquently expressed by many Conservatives in the coupe Of their protests against an increase in MPs' pay. But the sting had been taken out of the motion, partially anyhow, by the Government's pledge of further improvements as soon as the current review of all the financial and other problems Involved has been concluded.' It had been known for some tune that this was the Government's attitude, and Mr. Ly.ttelton dropped a broad hint over the week-end that some- thing would probably be done within three or four months te help pensioners. But this is not, and should not be made. a party-political matter. It is generally agreed that pensions are inadequate and should be increased. But the question of how and where the money is to be found has not yet been answered. It cannot, in fact, be answered with any confidence until both the Phillips Committee and the Government Actuary have ' reported. As Lord Beveridge has shown, the entire national insurance scheme is running into financial trouble. and there will have to be extensive readjustments if the Welfare State is to be kept on an even keel. All this is well known to the Opposition, of course, but that does not prevent it from trying to make party capital out Of the material nearest to hand.