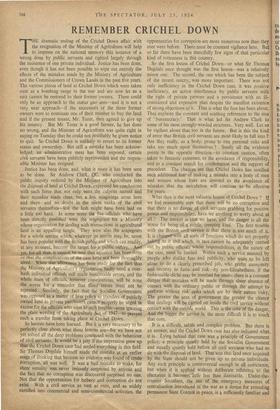 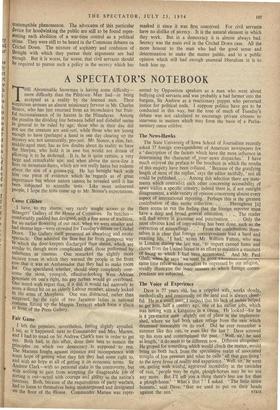 ' THE dramatic ending of the Crichel Down affair with the resignation of the Minister of Agriculture will help to impress on the national memory this instance of a wrong done by public servants and righted largely through the insistence of one private individual. Justice has been done. even though it has not been possible to wipe out entirely the effects of the mistakes made by the Ministry of Agriculture and the Commissioners of Crown Lands in the past five years. The various pieces of land at Crichel Down which were taken over as a bombing range in the war and are now let as a unit cannot be restored 'to their former owners. There could only be an approach to the status quo ante—and it is not a very near approach—if the successors of the three former owners were to nominate one of their number to buy the land and if the present tenant, Mr. Tozer, then agreed to give up his tenancy. But Mr. Tozer is a good farmer, he has done no wrong, and the Minister of Agriculture was quite right in saying on Tuesday that he could not justifiably be given notice to quit. So Crichel Down is unlikely to revert to its former status and ownership. But still a mistake has been acknow- ledged, an administrative mess has been exposed, certain civil servants have been publicly reprimanded and the respon- sible Minister has resigned.

Justice has been done, and, what is more it has been seen to be done. Sir Andrew Clark, QC, who conducted the public inquiry ordered by the Minister of Agriculture into the disposal of land at Crichel Down, expressed his conclusions vvith such force that not only were the culprits named and their mistakes made clear, but a few misgivings arose here and there and no doubt in the silent ranks of the civil servants themselves—lest the lash might have been laid on a little too hard. In some sense the five officials who have been directly punished were the scapegoats for a Ministry whose organisation for dealing with transactions in agricultural land is an appalling tangle. They were also the scapegoats for a whole service which, whatever its merits may be, never has been popular with the' British public and which can readily, at any moment, become the target for a public outcry. And yet. for all that, it cannot be said that injustice has been done , ow( ow complications of the case have not been thoroughly aired. When due allowance has been made for the fact that the Ministry of Agriculture's organisation badly need a over- haul, individual officials still made inexcusable errors, and the whole mass of officials, however conscientious, will be none the worse for a reminder that those •errors must not be repeated. Similarly, the fact that the Socialist Government was opposed as a matter of firm polici to transfers of publicly owned land to private purchasers cannot properly be urged in excuse for the officials who went to such lengths—even ignoring the plain wording of the Agriculture Act of 1947—to prevent such a transfer from taking place at Crichel Down.

So lessons have been learned. But it is very necessary to be perfectly clear about what those lessons are—for we have not yet solved all the deep problems connected with the behaviour of civil servants. It would be a pity if the impression grew up that the Crichel Down case had settled everything in this field. Sir Thomas Dugdale himself made the mistake at an earlier stage of thinking that because no evidence was found of crude corruption, all was well. It was a bad mistake to make, for sheer venality was never eriously suspected by anyone and the fact that no corruption was discovered surprised no one. Not that the opportunities for bribery and corruption do not exist. With a civil service as vast as ours, and as widely ramified into commercial and semi-commercial activities, the opportunities for corruption -are more numerous now than they ever were before. There must be constant vigilance here. But so far there have been mercifully few signs of that particular kind of rottenness in this country.

So the first lesson of Crichel Down—or what Sir Thomas Dugdale once thought was the first lesson—was a relatively minor one. The second, the one which has been the subject of the recent outcry, was more important. There was not only inefficiency in the Crichel Down case, it was positive. inefficiency, an active interference by public servants with the right of private persons and a persistence with an ill- considered and expensive plan despite the manifest existence of strong objections tdit. That is what the fuss has been about. That explains the constant and scathing references to the sins of 'bureaucracy.' That is what led Sir Andrew Clark to some of his most strongly-worded strictures. Very well. Let us be vigilant about that too in the future. But is this the kind of error that British civil servants are most likely to fall into ?

Are they really, as a body, prone to run personal risks and take too much upon themselves.? Surely all the evidence points in the opposite direction—to constant caution, often taken to fantastic extremes, to the avoidance of responsibility, and to a constant search for confirMation and the support of precedent. The chances are that Crichel Down has instilled such additional fear of making a mistake into a body of men and women whose lives are devoted to the avoidance of mistakes that the inoculation will continue to be effective for years.

What then is the most valuable lesson of Crichel Down ? If we feel reasonably sure that there will be no corruption and that there is no danger of civil servants grabbing for positive power and responsibility, have we anything to worry about at all '? The answer is that we have, and the danger is all the worse for being of a subtle, creeping kind. The first trouble with the British ivil service is that there is too much of it.

It is ch ith all sorts of functions which do not properly to it and which, in fact cannot be adequately carried out by public officials whose responsibilities, in the nature of the case, must be limited. Within such a service manned by people who dislike fuss and publicity, who want to be left alone to do a clearly prescribed job. who prefer anonymity and security to fame and risk--by non-Elizabethans, if the fashionable cliché may be inverted for once—there is a constant danger that mistakes will be made through sheer absence of contact with the ordinary public or through the attempt to perform without risk tasks which are by their nature risky. The greater the area of government the greater the chance that dealings will be carried on inside the civil service without contact with the outside world. This is the core of the danger. And the bigger the service is, the more difficult it is to touch that core.

It is a difficult, subtle and complex problem. But there is an answer, and the Crichel Down case has also indicated what. it is. Lying behind that case was a principle of Government policy, a principle quietly held by the Socialist Government and equally quietly held before all civil servants who had to do with the disposal of land. That was that land once acquired by the State should not be given up to private individuals. Any such principle is controversial enough in all conscience, but when it is applied without deliberate reference to the electorate it becomes 'little less than damnable. Under-the- counter Socialism, the use of the emergency measures of centralisation introduced in the war as a device for extending permanent State Control in peace, is a sufficiently familiar and ,:.Vontemptible phenomenon. The advocates of this particular ilevice for hoodwinking the public are still to be found repre- Seating each abolition of a war-time control as a political Crime. They were still to be heard in the Commons debates on Crichel Down. The mixture of sophistry and confusion of thought with which they pursue their arguments are bad enough. But it is worse, far worse, that civil servants should be required to pursue such a policy in the secrecy which has masked it since it was first conceived. For civil servants have no dislike of secrecy. It is the natural element in which they work. But in a democracy it is almost always bad. Secrecy was the main evil in the Crichel Down case. All the more honour to the man who had the good sense and determination to make the matter public, and to a public opinion which still had enough essential liberalism in it to back him up.