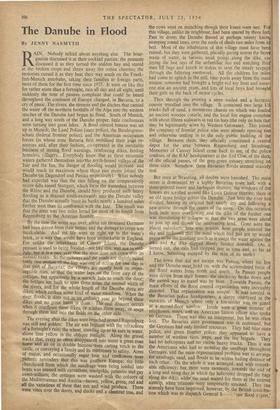 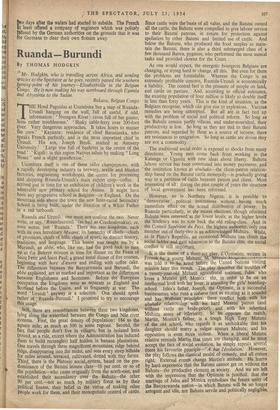 The Danube in Flood

By JENNY NASMYTH AIN. Nobody talked about anything else. The bour- geoisie discussed it at their cocktail parties; the peasants discussed it as they turned the sodden hay and stared at the broken crops and threw away the rotten cherries; the motorists cursed it as they beat their way south on the Frank- furt-Munich autobahn, taking their families to foreign parts, most of them for the first time since 1935. It went on like this for rather more than a fortnight, rain all day and all night, until suddenly the note of passive complaint that could be heard throughout the continent Of Europe changed, in Bavaria, to a cry of panic. The rivers, the streams and the ditches that carried the water off the northern foothills of the Alps into the western reaches of the Danube had begun to flood. South of Munich, and a long way south of the Danube proper, little confluences were turning into great lakes. A flood control bureau was set up in Munich; the Land Polizei (state police), the Bundesgrenz- schatz (federal frontier police), and the American occupation forces (in whose zone Bavaria lies) mobilised their joint re- sources and, after their fashion, co-operated in the inevitable business of issuing flood warnings, reinforcing dikes. feeding homeless villagers. Everybody knew that as these mountain waters gathered themselves intolthe north-bound valleys of the Isar and the Inn, the danger of flooding would increase and would reach its maximum where these two rivers joined the Danube (at Dagendorf and Passau respectively). What nobody had expected was that the rain falling on the comparatively minor hills round Stuttgart, which form the Watershed between the Rhine and the Danube, should have produced sueh heavy flooding as it drained south-eastwards into the Danube valley that the Danube actually burst its banks nearly a hundred miles further west than its confluence with the Isar. The result was that the river was two miles broad for most of its length from Regensburg to the Austrian frontier.

By the time the worst was over, about ten thousand Germans had been driven from their homes and the damage to crops was incalculable. And yet life went on right up to the water's brink, in a way that would have been unthinkable in England. For unlike the inhabitants of Canvey Island, the Danube peasant is used to being flooded- -not like this, and not in '1d- July. but it is a rare. year that the river does not come c$1.C1 its ,.rmat hanks. So the railways and the roads are slightly raised (only one Be ion was out of action for one day in that part of Bavaria); the villages are mostly built on imper- ceptible rises, so that the water laps on the front step of the cottages, but apparently by a miracle fails to reach the door: the bridges are built to span three times the normal width of the rivers, and for the whole length of the Danube there are dikes, which enclose some kind of water meadows. When the nver floods, it does not in an—ordinary year go beyond these dikes and no great harm is done. The real disaster occurs when it overflows these dikes, or washes them away, or seeps through them and into the fields on the other side.

The evening after the dikes were breached around Regensburg was still and golden: The air was brilliant with the refractions of a fortnight's rain; the wheat, standing up to its ears hi water, shone lime yellow in the oblique sunlight. Along the gravel tracks that, every so often disappeared into water a great roan horse and an ox in double harness 'were carting vetch to the cattle, or conveying a family and its mattresses to safety. Acres of maize, and occasionally sugar beet and sunflowers were &Pathetic reminders that this was southern Europe; the little churchyard from which the sandbags were being loaded into boats was massed with carnations, marigolds, petunias and gay sweet-william; the cottages were washed with the colours of the Mediterranean and Austria—brown, yellow, green, red and all the variations Of these that sun and wind produce. There were vines over the doors, and ducks and a chestnut tree, and the cows went on munching though their knees were wet. Fot this village, unlike its neighbour, had been spared by three feet. Past its doors the Danube flowed at perhaps twenty knotst sweeping round trees, over the roofs of sheds two miles from 44 bed. Most of the inhabitants of this village must have bee4 ruined; but they were gathered, placidly gazing across the fierce waste of water, at various weak points along the dike, en.i joying the last rays of the unfamiliar iun and watching theit men fill bags and knock in stakes to stop the steady seepage through the faltering earthwork. All the children for miles had come to splash in the still, blue pools away from the main stream; someone had brought a bright red toy boat and some- one else an ancient pram, and lots of local boys had brought their girls on the back of motor cycles.

Then through the evening a siren wailed and a fantastic convoy trundled into the village. It contained two large US trucks full of sand, a monstrous chassis on which was loaded an ancient wooden coracle, and the local fire engine complete with about fifteeii stalwarts in red tin hats (the only tin hats that may be legitimately worn by Western•Germans). This joined the company of frontier police who were already opening tins and otherwise settling in to the only public building of the village. Between them, they officially constituted a central depot for the area between Regensburg and Straubing. Memories of Canvey Island came back to me, of the police cordons, of the RAF headquarters at the lied Cow, of the sleet, of the official passes, of the grey-green estuary stretching oil three sides. Somehow, these Bavarian floods seemed scarcely real.

But once at Straubing, all doubts were banished. The main street is dominated by a highly Bavarian town hall, with a three-pointed tower and harlequin shutters; the windows of tho houses are scrolled around like Louis Quinze mirrors; there is an old stone.bridge across the Danube. Just here the river haS divided, leaving its original bed near!) dry and following a new course through the centre of the town. On this occasion both beds were overflowing and the dike of the further ono was threatening to collapse so that the two arms were about to join up and drown the intervening land. Gone were the placid onlookers; here was tension, here people scanned 1.130 sky and reelconettl-ftfilt the wind which had just got up would prow. to be the finishing touch as it swept the water against the ' —Alike and ■,e dike slipped slowly further downhill. (As it . turned out, the rain 'had stopped just in time and, so far ai I know, Straubing escaped by the skin of its teeth.) The town that did not escape was Passau, where the Inn and the Danube meet, head on, with the accumulated force of the flood waters from north and south. In Passau people were driven from their homes: the electricity broke down and the easiest way to travel was by boat. Towards Passau, the main efforts of the flood control organisation were inevitably directed. That organisation was unique. It was centred in the Bavarian police headquarters, a sleepy courtyard in the outskirts of Munich where only a fox-terrier was on guard at a second-floor window. Inside were a great number of telephones, maps. and an American liaison officer who spoke no German. There was also an interpreter, but he was often lost. The Bavarian state government was in command, but the Germans had only limited resources. They had blue state police, and green frontier police; they appeared to have a number Of wireless Vans, jeeps, and the fire brigade. They• had no helicopters and no visible heavy trucks. Thus it was the Americans who had to mobilise the sandbags throughout Germany, and the main organisational problem was to arrange for sandbags, sand, and floods to be within hailing distance of each other. On the whole it was arranged, and with remark- able efficiency; but there were moments, towards the end of a long and tiring day in which the helicopter dropped the bags along the dikes while the sand waited for them at the nearest airstrip, when relations were temporarily strained. They can scarcely have been improved, however, by the British con tribu- tion which was to dispatch General S---, 'our flood e tpert,' two days after the waters had started to subside. The French lit least offered a company of engineers which was politely tensed by tho German authorities on the grounds that it was fOr Germans to clear their own flotsam away.