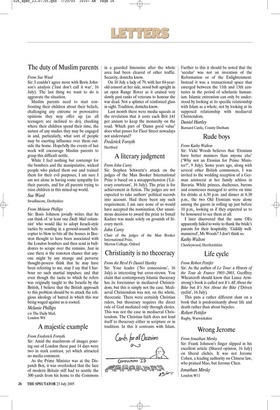 Sir: Boris Johnson jovially writes that he can think of ‘at least one Daily Mail columnist’ who would like to adopt Israeli-style tactics by sending in a ground-assault helicopter to blow to bits all the houses in Beeston thought to have been associated with the London bombers and then send in bulldozers to scrape over the remains. Just in case there is the remotest chance that anyone might by any strange and perverse thought-process think that he may have been referring to me, may I say that I harbour no such martial impulses; and that even though the tactic to which he refers was originally taught to the Israelis by the British, I believe that the British approach to this problem should be to attack the religious ideology of hatred in which this war being waged against us is rooted.