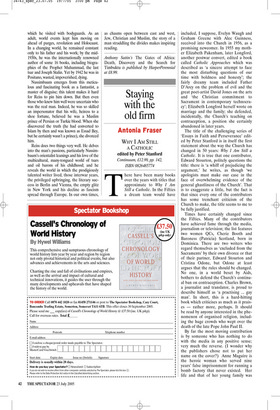 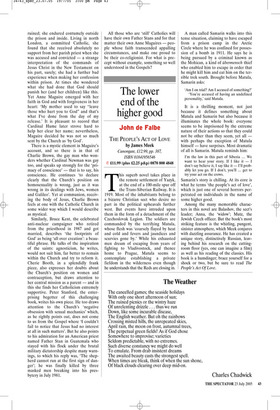 Staying with the old firm

WHY I AM STILL A CATHOLIC edited by Peter Stanford Continuum, £12.99, pp. 142, ISBN 0826485774 There have been many books over the years with titles that approximate to Why I Am Still a Catholic. In the Fifties a dream team would have included, I suppose, Evelyn Waugh and Graham Greene with Alec Guinness, received into the Church in 1956, as a promising newcomer. In 1955 my mother Elizabeth Pakenham, later Longford, another postwar convert, edited a book called Catholic Approaches which was described as ‘a sincere attempt to face the most disturbing questions of our time with boldness and honesty’; the fairly dreamy team included Father D’Arcy on the problem of evil and the great poet-artist David Jones on the arts and ‘the Christian commitment to Sacrament in contemporary technocracy’; Elizabeth Longford herself wrote on marriage and the family; she defended, incidentally, the Church’s teaching on contraception, a position she certainly abandoned in later years.

The title of the challenging series of ‘Essays in Faith and Perseverance’ edited by Peter Stanford is in itself the first statement about the way the Church has changed in 50 years: Why I Am Still a Catholic. It is true that one contributor, Edward Stourton, politely questions the title: there is ‘a whiff of prejudicing the argument,’ he writes, as though ‘we apologists must make our case in the face of overwhelming evidence of the general ghastliness of the Church’. That is to exaggerate a little, but the fact is that since every one of the contributors has some trenchant criticism of the Church to make, the title seems to me to be fully justified.

Times have certainly changed since the Fifties. Many of the contributors have achieved fame through the media, journalism or television; the list features two women QCs, Cherie Booth and Baroness (Patricia) Scotland, born in Dominica. There are two writers who regard themselves as ‘excluded from the Sacraments’ by their own divorce or that of their partner, Edward Stourton and Cristina Odone, but Odone at least argues that the rules should be changed. No one, in a world beset by Aids, bothers to defend the Church’s continual ban on contraception. Charles Brown, a journalist and translator, is proud to describe himself as ‘a practising ... gay man’. In short, this is a hard-hitting book which criticises as much as it praises — rather more, perhaps. It should be read by anyone interested in the phenomenon of organised religion, including the huge crowds who wept over the death of the late Pope John Paul II.

By far the most moving contribution is by someone who has nothing to do with the media in any positive sense; very much the reverse. (I wonder why the publishers chose not to put her name on the cover?) Anne Maguire is the heroic woman who served nine years’ false imprisonment for running a bomb factory that never existed. Her life and that of her young family was ruined; she endured contumely outside the prison and inside. Living in north London, a committed Catholic, she found that she received absolutely no support from her parish priest when she was accused and convicted — a strange interpretation of the commands of Jesus Christ in the New Testament on his part, surely; she had a further bad experience when making her confession within prison. At times she wondered what she had done that God should punish her (and her children) like this. Yet Anne Maguire emerged with her faith in God and with forgiveness in her heart: ‘My mother used to say “leave those who hurt you to God” and that’s what I’ve done from the day of my release.’ It is pleasant to record that Cardinal Hume later strove hard to help her clear her name; nevertheless, Maguire decided he was not so much sent by the Church as ‘by God’.

There is a mystic element in Maguire’s account, and so there is in that of Charlie Brown, the gay man who wonders whether Cardinal Newman was gay too, and speaks up strongly for the ‘primacy of conscience’ — that is to say, his conscience. He continues ‘to declare clearly that the Church’s position on homosexuality is wrong, just as it was wrong in its dealings with Jews, women and Galileo’. Yet at communion, receiving the body of Jesus, Charlie Brown feels at one with the Catholic Church in some wider way which I would describe as mystical.

Similarly, Bruce Kent, the celebrated anti-nuclear campaigner who retired from the priesthood in 1987 and got married, describes ‘the footprints of God’ as being ‘all over creation’: a beautiful phrase. He talks of the inspiration of the saints: agnosticism, he writes, would not suit him, far better to remain within the Church and try to reform it. Cherie Booth, in a splendidly frank piece, also expresses her doubts about the Church’s position on women and contraception, but draws attention to her central mission as a parent — and in this she finds her Catholicism extremely supportive. Peter Stanford, the enterprising begetter of this challenging book, writes his own piece. He too draws attention to the Church’s ‘negative obsession with sexual mechanics’ which, as he rightly points out, does not come to us from the Gospel where ‘I couldn’t fail to notice that Jesus had no interest at all in such matters’. But he also points to his admiration for an American priest named Father Stan in Guatemala who stayed with his flock under the brutal military dictatorship despite many warnings, to which his reply was, ‘The shepherd cannot run at the first sign of danger’; he was finally killed by three masked men breaking into his presbytery in July 1981. All those who are ‘still’ Catholics will have their own Father Stans and for that matter their own Anne Maguires — people whose faith transcended appalling circumstances, and make one proud to be their co-religionist. For what is precept without example, something so well understood in the Gospels?