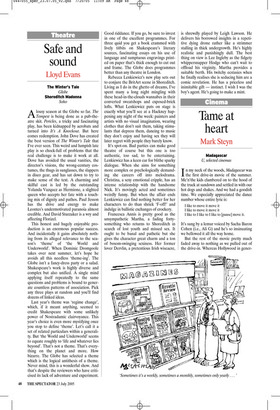 The Winter’s Tale Globe Shoreditch Madonna Soho Alousy season at the Globe so far. The Tempest is being done as a pub-theatre skit. Pericles, a tricky and fascinating play, has been kidnapped by acrobats and turned into It’s A Knockout. But here comes redemption. John Dove has created the best version of The Winter’s Tale that I’ve ever seen. This weird and lumpish late play is so chock-full of problems that the real challenge is to make it work at all. Dove has avoided the usual vanities, the director’s visions, the wrong-century costumes, the thugs in sunglasses, the slappers in disco gear, and has sat down to try to make sense of the text. A charming and skilful cast is led by the outstanding Yolanda Vazquez as Hermione, a slighted queen who accepts her fate with a touching mix of dignity and pathos. Paul Jesson has the drive and energy to make Leontes’s undermotivated paranoia almost credible. And David Sturzaker is a wry and affecting Florizel.

This honest and hugely enjoyable production is an enormous popular success. And incidentally it gains absolutely nothing from its alleged relevance to the season’s ‘theme’ of ‘the World and Underworld’. When Dominic Dromgoole takes over next summer, let’s hope he avoids all this needless ‘theme-ing’. The Globe isn’t a fancy-dress party or a salad. Shakespeare’s work is highly diverse and complex but also unified. A single mind applying itself repeatedly to the same questions and problems is bound to generate countless patterns of association. Pick any three plays at random and you’ll find dozens of linked ideas.

Last year’s theme was ‘regime change’, which, if it meant anything, seemed to credit Shakespeare with some unlikely power of Nostradamic clairvoyance. This year’s choice is even more mystifying once you stop to define ‘theme’. Let’s call it a set of related particulars within a generality. But ‘the World and Underworld’ seems to equate roughly to ‘life and whatever lies beyond’. That’s not a theme. That’s everything on the planet and more. How bizarre. The Globe has selected a theme which is the logical antithesis of a theme. Never mind, this is a wonderful show. And that’s despite the reviewers who have criticised its lack of adventure and experiment. Good riddance. If you go, be sure to invest in one of the excellent programmes. For three quid you get a book crammed with lively titbits on Shakespeare’s literary sources, fascinating essays on his use of language and sumptuous engravings printed on paper that’s thick enough to cut out and frame. The Globe does programmes better than any theatre in London.

Rebecca Lenkiewicz’s new play sets out to conjure the BritArt scene in Shoreditch. Living as I do in the ghetto of dreams, I’ve spent many a long night mingling with these head-in-the-clouds wannabes in their converted sweatshops and exposed-brick lofts. What Lenkiewicz puts on stage is exactly what you’ll see at a Hackney happening any night of the week: painters and artists with no visual imagination, wearing clothes that don’t suit them, taking stimulants that depress them, dancing to music they don’t enjoy and having sex they will later regret with people they barely know.

It’s spot-on. Bad parties can make good theatre of course but this one is too authentic, too sad, to be entertaining. Lenkiewicz has a keen ear for blithe sparky dialogue. When she aims for something more complex or psychologically demanding she careers off into melodrama. Christina, a sexy emotional cripple, has an intense relationship with the handsome Nick. It’s movingly acted and sometimes weirdly funny. But when the affair ends Lenkiewicz can find nothing better for her characters to do than shriek ‘F-off!’ and indulge in ballistic exchanges of crockery.

Francesca Annis is pretty good as the unsympathetic Martha, a fading fortysomething who returns to Shoreditch in search of lost youth and missed sex. It ought to be banal and pathetic but she gives the character great charm and a ton of bosom-swinging sexiness. Her former lover Dervlin, a pretentious Irish wiseacre, is shrewdly played by Leigh Lawson. He delivers his borrowed insights in a repetitive dying drone rather like a strimmer stalling in thick undergrowth. He’s highly realistic and punishingly dull. The best thing on view is Lee Ingleby as the fidgety whippersnapper Hodge who can’t wait to offload his virginity. Martha provides a suitable berth. His twitchy ecstasies when he finally realises she is seducing him are a comic revelation. He has a priceless and inimitable gift — instinct. I wish I was the boy’s agent. He’s going to make a mint.