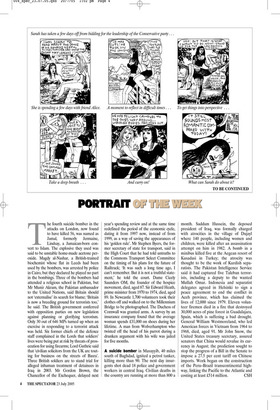 PORTRAIT OF THE WEEK T he fourth suicide bomber in the

attacks on London, now found to have killed 56, was named as Jamal, formerly Jermaine, Lindsay, a Jamaican-born convert to Islam. The explosive they used was said to be unstable home-made acetone peroxide. Magdy al-Nashar, a British-trained biochemist whose flat in Leeds had been used by the bombers, was arrested by police in Cairo, but they declared he played no part in the bombings. Three of the bombers had attended a religious school in Pakistan, but Mr Munir Akram, the Pakistan ambassador to the United Nations, said Britain should not ‘externalise’ its search for blame; ‘Britain is now a breeding ground for terrorists too,’ he said. The British government conferred with opposition parties on new legislation against planning or glorifying terrorism. Only 30 out of 646 MPs turned up when an exercise in responding to a terrorist attack was held. Six former chiefs of the defence staff complained in the Lords that soldiers’ lives were being put at risk by threats of prosecution for using firearms; Lord Guthrie said that ‘civilian solicitors from the UK are touting for business on the streets of Basra’. Three British soldiers are to stand trial for alleged inhuman treatment of detainees in Iraq in 2003. Mr Gordon Brown, the Chancellor of the Exchequer, delayed next year’s spending review and at the same time redefined the period of the economic cycle, dating it from 1997 now, instead of from 1999, as a way of saving the appearances of his ‘golden rule’. Mr Stephen Byers, the former secretary of state for transport, said in the High Court that he had told untruths to the Commons Transport Select Committee on the timing of his plans for the future of Railtrack; ‘It was such a long time ago, I can’t remember. But it is not a truthful statement,’ he told the court. Dame Cicely Saunders OM, the founder of the hospice movement, died, aged 87. Sir Edward Heath, prime minister from 1970 to 1974, died, aged 89. In Newcastle 1,700 volunteers took their clothes off and walked on to the Millennium Bridge to be photographed. The Duchess of Cornwall was granted arms. A survey by an insurance company found that the average woman spends £31,000 on shoes during her lifetime. A man from Wolverhampton who twisted off the head of his parrot during a drunken argument with his wife was jailed for five months.

A suicide bomber in Musayyib, 40 miles south of Baghdad, ignited a petrol tanker, killing more than 90. The next day insurgents shot dead 18 police and government workers in central Iraq. Civilian deaths in the country are running at more than 800 a month. Saddam Hussein, the deposed president of Iraq, was formally charged with atrocities in the village of Dujayl where 140 people, including women and children, were killed after an assassination attempt on him in 1982. A bomb in a minibus killed five at the Aegean resort of Kusadasi in Turkey; the atrocity was thought to be the work of Kurdish separatists. The Pakistan Intelligence Service said it had captured five Taleban terrorists, including a deputy to the wanted Mullah Omar. Indonesia and separatist delegates agreed in Helsinki to sign a peace agreement to end the conflict in Aceh province, which has claimed the lives of 12,000 since 1979. Eleven volunteer firemen died in a fire that destroyed 30,000 acres of pine forest in Guadalajara, Spain, which is suffering a bad drought. General William Westmoreland, who led American forces in Vietnam from 1964 to 1968, died, aged 91. Mr John Snow, the United States treasury secretary, assured senators that China would revalue its currency in August; the prediction sought to stop the progress of a Bill in the Senate to impose a 27.5 per cent tariff on Chinese imports. Work began on the construction of the Peru–Brazil transcontinental highway, linking the Pacific to the Atlantic and costing at least £514 million. CSH