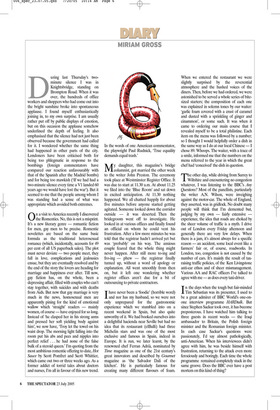 on Brompton Road. When it was over, the hundreds of office workers and shoppers who had come out into the bright sunshine broke into spontaneous applause. I found myself enthusiastically joining in, to my own surprise. I am usually rather put off by public displays of emotion, but on this occasion the applause somehow underlined the depth of feeling. It also emphasised that the silence had not just been observed because the government had called for it. I wondered whether the same thing had happened in other parts of the city. Londoners have been criticised both for being too phlegmatic in response to the bombings (foreign commentators have compared our reaction unfavourably with that of the Spanish after the Madrid bombs) and for being too mawkish (‘If we had had a two-minute silence every time a V1 landed 60 years ago we would have lost the war’). But it seemed to me that the people among whom I was standing had a sense of what was appropriate which avoided both extremes.

On a visit to America recently I discovered the Romentics. No, this is not a misprint. It’s a new literary genre — romantic fiction for men, gay men to be precise. Romentic novelettes are based on the same basic formula as the traditional heterosexual romance (which, incidentally, accounts for 49 per cent of all US paperback sales). The plot must never deviate — two people meet, they fall in love, complications and jealousies ensue, but they are eventually resolved and by the end of the story the lovers are heading for marriage and happiness ever after. Till now, gay fiction has, on the whole, been a depressing affair, filled with couples who can’t stay together, with suicides and with deaths from Aids. But now that gay marriage is very much in the news, homosexual men are apparently pining for the kind of emotional wallow which ‘straight’ readers — mainly women, of course — have enjoyed for so long. Instead of ‘he clasped her in his strong arms and pressed her soft yielding body against him’, we now have, ‘Troy let the towel on his waist drop. The morning light falling into the room put his abs and pecs and nipples into perfect relief ... he had none of the false bulk of a steroid queen.’ I’m quoting from the most ambitious romentic offering to date, Hot Sauce by Scott Pomfret and Scott Whittier, which came out two or three weeks ago. As a former addict of torrid tales about doctors and nurses, I’m all in favour of this new trend. In the words of one American commentator, the playwright Paul Rudnick, ‘True equality demands equal trash.’ My daughter, this magazine’s bridge columnist, got married the other week to the writer John Preston. The ceremony took place at Westminster Register Office. It was due to start at 11.30 a.m. At about 11.25 we filed into the ‘Blue Room’ and sat down in excited anticipation. At 11.30 nothing happened. We all chatted happily for about five minutes before anyone started getting agitated. Someone looked down the corridor outside — it was deserted. Then the bridegroom went off to investigate. He looked in at various offices and finally found an official on whom he could vent his frustration. After a few more minutes he was told that the registrar hadn’t arrived yet but was ‘probably’ on his way. The anxious couple feared that the whole thing might never happen. After still more to-ing and fro-ing — phew — the registrar finally turned up, without a word of apology or explanation. All went smoothly from then on, but it left one wondering whether register offices aren’t due for a bit of outsourcing to private contractors.

Ihave never been a ‘foodie’ (horrible word) and nor has my husband, so we were not only unprepared for the gastronomic experience which we stumbled into on a recent weekend in Spain, but also quite unworthy of it. We had booked ourselves into a delightful hacienda near Seville but had no idea that its restaurant (elBulli) had three Michelin stars and was one of the most exclusive and famous in Spain, indeed in Europe. It is run, we later learnt, by the renowned chef Ferran Adrià, nominated by Time magazine as one of the 21st century’s great innovators and described by Gourmet magazine as ‘the Salvador Dali of the kitchen’. He is particularly famous for creating many different flavours of foam. When we entered the restaurant we were slightly surprised by the reverential atmosphere and the hushed voices of the diners. Then, before we had ordered, we were astonished to be served a whole series of bitesized starters; the composition of each one was explained in solemn tones by our waiter: ‘garlic foam covered with a crust of caramel and dusted with a sprinkling of ginger and cinammon’, or some such. It was when it came to ordering our main course that I revealed myself to be a total philistine. Each item on the menu was followed by a number; so I thought I would helpfully order a dish in the same way as I do at our local Chinese — I chose 89. Whoops. The waiter, with a trace of a smile, informed me that the numbers on the menu referred to the year in which the great chef had ‘conceived’ the dish in question.

The other day, while driving from Surrey to Wiltshire and encountering no congestion whatever, I was listening to the BBC’s Any Questions? Most of the panellists, particularly the writer A.N. Wilson, were inveighing against the motor-car. The whole of England, they asserted, was in gridlock. No doubt many people will think that I’m demented but, judging by my own — fairly extensive experience, the idea that roads are choked by the sheer volume of traffic is a myth. I drive out of London every Friday afternoon and generally there are very few delays. When there is a jam, it’s almost always for a specific reason — an accident, some local event like a farmers’ fair or, of course, roadworks. In London, too, congestion is not caused by the number of cars. It’s mainly the result of taxraising traffic policies, of the Ken Livingstone anti-car ethos and of sheer mismanagement. Various AA and RAC officers I’ve talked to agree with me — as does every taxi-driver.

In the days when the tough but fair-minded Tim Sebastian was its presenter, I used to be a great admirer of BBC World’s one-onone interview programme HARDtalk. But since Stephen Sackur took over, it has become preposterous. I have watched him talking to three guests in recent weeks — the Iraqi ambassador to Britain, the Polish foreign minister and the Romanian foreign minister. In each case Sackur’s questions were passionately, I’d say almost pathologically, anti-American. When his interviewees didn’t agree with him, he was beside himself with frustration, returning to the attack even more ferociously and boringly. Each time the whole programme remained completely stuck in the same groove. Does the BBC ever have a post mortem on this kind of thing?