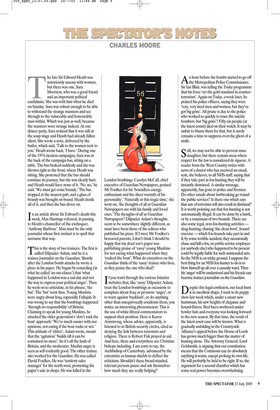 but there was one, Sara Morrison, who was a good friend and an important political confidante. She was with him when he died on Sunday. Sara was robust enough to be able to withstand the strange manners and see through to the vulnerable and honourable man within. Which was just as well, because the manners were strange indeed. At one dinner party, Sara noticed that it was still at the soup stage and Heath had already fallen silent. She wrote a note, delivered by the butler, which said, ‘Talk to the women next to you.’ Heath wrote back, ‘I have.’ During one of the 1974 election campaigns, Sara was at the back of the campaign bus, sitting on a table. The bus braked suddenly and she was thrown right to the front, where Heath was sitting. She protested that the bus should continue its journey, but she was clearly hurt, and Heath would have none of it. ‘No, no,’ he said. ‘We must get some brandy.’ The bus stopped at the nearest pub, and a glass of brandy was brought on board. Heath drank all of it, and then the bus drove on.

In an article about Sir Edward’s death this week, Max Hastings referred, in passing, to Heath’s chancellor of the exchequer, ‘Anthony Barbour’. Max must be the only journalist whose first instinct is to spell that surname that way.

This is the story of two trainees. The first is called Dilpazier Aslam, and he is a trainee journalist on the Guardian. Shortly after the London bomb attacks he wrote a piece in his paper. He began by conceding (in what he called ‘an out-clause’) that ‘what happened in London was a sad day and not the way to express your political anger’. Then he went on to articulate, in his phrase, ‘the but’. The ‘but’ went thus. Young Muslims were angry about Iraq, especially Fallujah. It was wrong to say that the bombings happened ‘through no responsibility’ of Britain. Claiming to speak for young Muslims, he attacked the older generation’s ‘don’t rock the boat’ approach: ‘We’re much sassier with our opinions, not caring if the boat rocks or not.’ This attitude of ‘elders’, Aslam wrote, meant that the ‘agitation’ ‘builds till it can be contained no more’. So it’s all the fault of Britain, and the moderates. Muslim anger is seen as self-evidently good. The other trainee also worked for the Guardian. He was called David Foulkes. He was ‘territory sales manager’ for the north-west, promoting the paper’s sale in shops. He was killed in the London bombings. Carolyn McCall, chief executive of Guardian Newspapers, praised Mr Foulkes for his ‘boundless energy, enthusiasm and the sheer warmth of his personality’. ‘Naturally at this tragic time,’ she went on, ‘the thoughts of all at Guardian Newspapers are with his family and loved ones.’ The thoughts of all at Guardian Newspapers? Dilpazier Aslam’s thoughts seem to be somewhere slightly different, as must have been those of the editors who published his piece. If I were Mr Foulkes’s bereaved parents, I don’t think I should be happy that my dead son’s paper was publishing praise of ‘sassy’ young Muslims for not caring what happened when they ‘rocked the boat’. What do executives on the Guardian think of the ‘sassy’ trainee who lives, as they praise the one who died?

If you trawl through the various Islamist websites that, like ‘sassy’ Dilpazier Aslam, treat the London bombings as occasions to complain about Iraq or promote ‘anger’, or to warn against ‘backlash’, or do anything other than unequivocally condemn them, you notice an interesting phenomenon. This is the use of white liberal commentators to support their position. Here is Karen Armstrong, whose advice, apparently, is listened to in British security circles, cited as denying the link between terrorism and religion. There is Robert Fisk prayed in aid. And here, there and everywhere are Christian bishops including, I am sorry to say, the Archbishop of Canterbury, advanced by the extremists as human shields to deflect the criticisms. Shouldn’t these broad-minded, tolerant persons pause and ask themselves how much they are really helping? An hour before the bombs started to go off the Metropolitan Police Commissioner, Sir Ian Blair, was telling the Today programme that his force ‘set the gold standard in counterterrorism’. Again on Today, a week later, he praised his police officers, saying they were ‘very, very tired men and women, but they’ve got big grins’. All praise is due to the police who worked so quickly to trace the suicide bombers, but ‘big grins’? Fifty-six people (at the latest count) died on their watch. It may be unfair to blame them for that, but it surely remains a time to suppress even the ghost of a smile.

Still, we may not be able to prevent mass slaughter, but there remain areas where respect for the law is considered de rigueur. A reader from the West Country writes with news of a doctor who has received an email, sent, she believes, to all NHS staff, saying that if they take part in fox-hunting they will be instantly dismissed. A similar message, apparently, has gone to police and firemen. Do other emails about lawbreaking go round the public services? Is there one which says that acts of terrorism will also result in dismissal? It is worth pointing out that fox-hunting is not automatically illegal. It can be done by a hawk, or by a maximum of two hounds. There are also some legal, non-fox-hunting activities drag-hunting, chasing ‘the clean boot’, hound exercise — which fox-hounds take part in and if, by some terrible accident, they occasionally chase and kill a fox, no public service employee (or anybody else) who happened to be present could be legally liable for such unintended acts. So the NHS is on tricky ground. I suppose the best thing for an NHS fox-hunter to do is to blow himself up all over a casualty ward. Then his ‘anger’ will be understood and his friends can become trainee journalists on the Guardian.

Despite this legal confusion, our local hunt is in excellent shape. I went to its puppy show last week which, under a smart new huntsman, hit new heights of elegance and hound-fitness. Red faces sweltered under bowler hats and everyone was looking forward to the new season. By that time, the result of the latest court case will be known. What is gradually unfolding in the Countryside Alliance’s appeal before the House of Lords has grown much bigger than the matter of hunting alone. The Attorney General, Lord Goldsmith, is arguing that our constitution means that the Commons can do absolutely anything it wants, except prolong its own life. He will probably be held to be right. If so, the argument for a second chamber which has some real power becomes overwhelming.