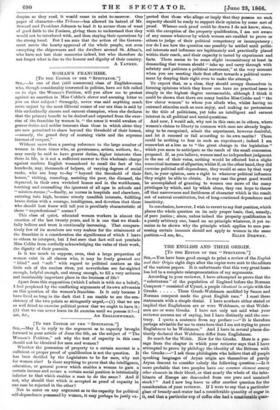 to the argument as to capacity brought forward in your article of June the 9th, on the subject of "The Women's Petition," ask why the test of capacity in this case should not be identical for men and women?

Whether the possession of property to a certain amount is a sufficient or proper proof of qualification is not the question. It has been decided by the Legislature to be for men, why not for women also? Is there anything to prove that the intelligence, education, or general power which enables a woman to gain a certain income and secure a certain social position is intrinsically inferior to that which enables a man to do the same ? And if not, why should that which is accepted as proof of capacity in one case be rejected in the other?

Not to enter on any argument as to the capacity for political self-dependence possessed by women, it may perhaps be justly ex- pected that those who allege or imply that they possess no such capacity should be ready to support their opinion by some sort of proof. Whence such proof could be drawn I do not know, since, with the exception of the property qualification, I am not aware of any means whatever by which women are enabled to prove or others to judge of their political competency or incompetency ; nor do I see how the question can possibly be settled until politi- cal interests and influence are legitimately and practically placed within their reach, and their capacity is tested by experiment and facts. There seems to be some slight inconsistency at least in demanding that women should "take up and carry through with sobriety and patience a political movement," at the very moment when you are meeting their first effort towards a political move- ment by denying their right even to make the attempt.

To expect that, as a class, they should occupy themselves in forming opinions which they know can have no practical issue is simply in the highest degree unreasonable, although I think it could be shown that there are many besides Miss Cobbe and "the few clever women" to whom you allude who, whilst having no outward stimulus such as men enjoy, and making no pretensions to the title of politicians, yet take an intelligent and earnest interest in all political and social questions.

And now, I would ask, why not in this case, as in others, where women's claims to liberty in common with men are already begin- ning to be recognized, admit the experiment, however doubtful, and let it succeed or fail according to its own merits? There could be nothing to fear in such an experiment ; indeed I am somewhat at a loss as to "the great change in the legislation" which you seem to anticipate as the result of the small concession proposed. If, as you believe, women used no independent judgment in the use of their votes, nothing would be effected but a slight numerical increase of all parties, whilst if, on the other hand, they did exercise political self-dependence, they would at once by that very fact, in your opinion, earn a right to whatever political influence they might be able to obtain. In any case the great good would be accomplished of granting to women one more of the many privileges by which, and by which alone, they can hope to throw off that narrowness and feebleness of character which is the result not of natural constitution, but of long-continued dependence and inactivity.

In conclusion, however, I wish to revert to my first position, which places the whole question on its only proper basis, that, namely, of pure justice ; since, unless indeed the property qualification is a purely arbitrary one, based on no principle whatever, it yet re- mains to be shown why the principle which applies to men pos- sessing certain incomes should not apply to women in the same