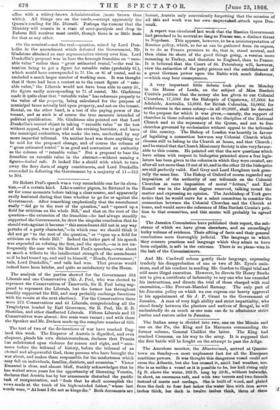 Sir Robert Peel's speech was a very remarkable one for

its eleva- tion,—of a certain kind. Like a carrier pigeon, he fluttered in the air for some moments before taking a clear course, and apparently really hesitated during that time whether to go for or against the Government. After remarking emphatically that the amendment really "did go to the root of the question," and "opened up a field for criticism on the whole Bill," and that on the root of the question—the extension of the franchise—he had always steadily supported the Government, he drew the singular conclusion that he should vote against it because "this amendment did not in any way partake of a party character,"—in which case we should think it did not go "to the root of the question," or "open up a field for criticism on the whole Bill." Indeed the latter part of his speech was expended on refuting the first, and the speech,—as is not un- frequently the case with Sir Robert Peel's speeches,—was about as much a tribute to the intellectual strength of the amendment as if he had tossed up, and said to himself, "Heads, Government;" tails, Lord Dunkellin," and tails had won. That process would indeed have been briefer, and quite as satisfactory to the House.