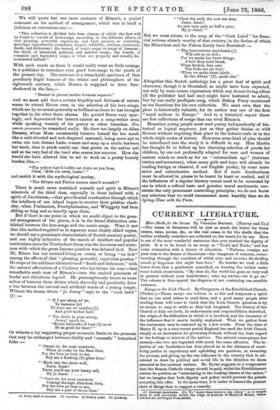 Essays on the Irish (Yurch. By Clergymen of the Established

Church. (Parker.)—These essays are written in so fair and temperate a spirit that no one need refuse to read them, and a good many people after reading them will come to think that the Irish Church question is by no means so easy to settle as they had imagined. The history of the Church is duly set forth, its endowments and responsibilities described, the origin of the difficulties in which it is involved, and the character of the influence that it exerts lucidly explained. What we gathor from the statements may be summed up in a few words. From the time of Henry II. up to a very recent period England has used the Irish Church simply as an instrument for governing Ireland, without the least regard to the feelings or interest of the natives. The natural consequence has- ensued,—the two are regarded with much the same affection. The in- justice of our forefathers has thus placed us in the dilemma of sacri- ficing justice to expediency and upholding our garrison, or reversing the process, and giving up the one influence in the country that is cal- culated to draw its political and social life in the direction we deem essential to the national welfare. Mr. Byrne suggests as a compromise that the Roman Catholic clergy should be paid, whilst the Establishment retains its position as "ministering to tho loading classes of the nation," but we imagine that both dignity and policy would prevent the priests accepting this offer. In the mean time, it is easier to lament the present state of things than to suggest a remedy.

ti.) Borough merchants. (2 ) To "make them lairds in the Abbey" IS ti compel them to seek protection within the verge or greeted of Holyroad Rouse, where debtors are privileged from arrest.