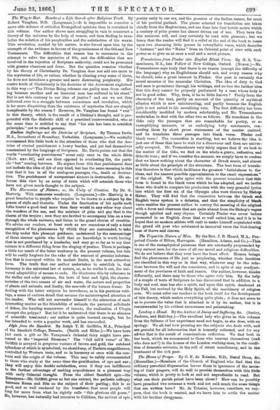 The Harmonies of Nature ; or, the Unity of Creation.

By Dr. G. Hartwig. With ntunerous woodcuts. (Longmans.)—Dr. Hartwig is a great benefactor to people who require to be drawn to a subject by the graces of style and rhetoric. Under the fascination of his spells such folks learnt a good deal more than they would in any other way about the wonders of the sea, and the mixture of grim and gay that is the charm of the tropics ; now they are invited to accompany him on a tour through the whole universe, and listen to the grand chorus of creation. We advise our readers, at least such as are conscious of only a faint recognition of the phenomena by which they are surrounded, to take the trip under this pleasant guidance, undeterred by the murmurings of those sterner spirits who hold that no knowledge is worth having that is not purchased by a headache, and may go so far as to say that science is a different thing from the singing of psalms. There is perhaps a little too much of the latter tendency in the present volume, but this will be easily forgiven for the sake of the amount of genuine informa- tion that is conveyed within its modest limits, in the most attractive form. The truth that our author undertakes to establish is, that harmony is the universal law of nature, or, as he works it out, the uni- versal adaptability of means to ends. He illustrates this by reference to the stellar and solar systems, the laws of heat and light, the charac- teristics of the two oceans of air and water, the nature and properties of plants and animals, and finally, the marvels of the human frame. In dealing with the latter subjects he introduces, as in his previous writ- ings, a mass of curious detail that secures the uninterrupted attention of the reader. Who will not surrender himself to the attraction of such interesting matter as the friendship of animals, the parental solicitude of fishes, the hunting manceuvres of insects, the realization of Utopia amongst the polyps ? But let it be understood that there is no absence of scientific treatment ; our author is quite learned enough, but he has intended to write a popular work, and has succeeded.