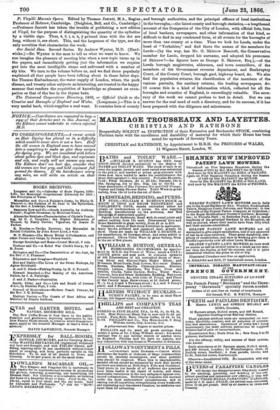 Page 24, 23 June 1866 — and borough authorities, and the principal officers of local institutions
Close

and borough authorities, and the principal officers of local institutions

in the boroughs,—the latest county and borough statistics,—a lengthened account of the Companies of the City of London, with official lists, lists of local bankers, newspapers, and other information of that kind, so difficult to find in any condensed form, at all events for the boroughs of more than one county at a time. Thus we look for Leeds, under the head of "Yorkshire," and find there the names of the members for Leeds—(by the way, has Mr. G. Skirrow Beecroft, the Conservative member for Leeds, dropped his surname, and adopted his prenomen of Skirrow 2—he figures here as George S. Skirrow, Esq.),—of the Leeds borough magistrates, aldermen, and town councillors, of the members of thb Government revenue department, and Bankruptcy Court, of the County Court, borough gaol, highway board, dm. We also find the population returns, the classification of the members of the various pursuits, the sanitary returns, the leading newspapers, em. Of course this is a kind of information which, collected for all the boroughs and counties of England, is exceedingly valuable. The accu- racy of the work we cannot profess to test in detail. But we can answer for the real need of such a directory, and for its success, if it has been prepared with due diligence and minuteness.