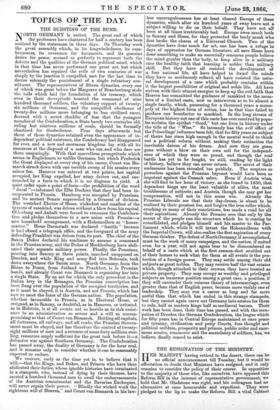 THE BURSTING OF THE BUND.

NORTH GERMANY is united. The great end of which the professors have chattered for half a century has been realized by the statesman in three days. On Thursday week the great assembly which, in its longwindedness, its cum- brousness, its reverence for documents, and its genuine desire for peace, seemed so perfectly to represent both the defects and the qualities of the German political mind, which in that time has never performed one great act, but which nevertheless has repaired the evils of two centuries of war simply by the inaction it compelled, met for the last time to decree solemnly the punishment of a single refractory con- stituent. The representatives of fifteen dynasties, every one of which was great before the Margrave of Brandenburg stole the tolls which laid the foundation of his treasury, which even in their decrepitude boasted the command of nine hundred thousand soldiers, the voluntary support of twenty- six millions of Germans, and the compelled obedience of twenty-five millions more belonging to less civilized races, decreed with a secret shudder of fear that the youngest member of the Confederation, a State barely two centuries old, ruling but nineteen millions of souls, should be formally chastised for disobedience. Four days afterwards but three of those dynasties retained even the appearance of in- dependent political existence, the Confederacy had disappeared for ever, and a new and enormous kingdom lay with all its resources at the disposal of a man who can and who dare use them unsparingly. With that marvellous promptitude which

seems to Englishmen so unlike Germans, but which Frederick the Great displayed at every step of his career, Count von Bis- marck struck down with one terrible sweep of his armies every minor foe. Hanover was entered at two points, her capital occupied, her King expelled, her army driven out, and sur- rounded by a force to which it is no disgrace to yield. A quiet order upon a point of form—the prohibition of the word "ducal "—informed the Elbe Duchies that they had been in- corporated in Prussia. Hamburg was occupied by Prussians, and Its ancient Senate superseded by a General of division. The wretched Elector of Hesse, wickedest and smallest of the tyrants of mankind, was driven without a blow from his capital. Oldenburg and .Anhalt were forced to renounce the Confedera- tion and pledge themselves to a new union with Prussia—a new household arrangement, with a Hohenzollern as ‘‘ house- master." Hesse Darmstadt was declared " hostile " because it had closed a telegraph office, and the foreg-uard of the army defending Frankfort was driven from its post. The chief of the Saxon Dukes declared his readiness to assume a command in the Prussian army, and the Dukes of Mecklenburg have abdi- cated their separate military power. Finally, the Prussians, pouring into Saxony at three points, marched unopposed on Dresden, and while King and army fled into Bohemia, took down everywhere the Saxon arms. North Germany, from the Rhine to Posen, from Jutland to Frankfort, is in Prussian hands, and already Count von Bismarck is organizing her into a single State. By an act for which the only precedent is the Italian levy in the Romagna, the Prussian conscription has been flung over the population of the occupied territories, and as it must be obeyed, it is Austria, and not Prussia, which has now to meet the force of the German nation. The population, whether favourable to Prussia, as in Electoral Hesse, or resigned, as in Saxony, or doubtful, as in Hanover, or irritated, as in Holstein, is at all events not so hostile as to risk resist- ance to an administration so severe and a will so uncom- promising as that of Count von Bismarck. Holding all capitals, all fortresses, all railways, and all roads, the Prussian Govern- ment must be obeyed, and has therefore the control of twenty- eight millions of men and a revenue of some forty millions ster- ling, resources amply suffici ant for the great task before it—a defensive war against Southern Germany. The Confederation has passed away, the duality of Germany is for the hour real, and it remains only to consider whether it can be reasonably expected to endure.

We venture, early as the time yet is, to believe that it will,—that the Kings, and Dukes, and Princes who have thus abdicated their duties, whose ignoble histories have terminated in a stampede, who, instead of dying by their thrones, have carried a hundred thousand men to swell the embarrassments of the Austrian commissariat and the Bavarian Exchequer, will never regain their power. "Blindly the wicked work the righteous will of Heaven," and Count von Bismarck in his law-

less unscrupulousness has at least cleared Europe of these dynasties, which after six hundred years of sway leave not a subject willing to die on their behalf. They have not all been at all times irretrievably bad. Europe owes much both to Saxony and Hesse, for they protected the burly monk who first broke the charm of a Universal Church. Two of the dynasties have done much for art, one has been a refuge in days of oppression for German literature, all save Hesse have done something to make an essentially sensuous people believe the mind greater than the body, to keep alive in a military race the healthy faith that learning is nobler than military skill. But they have all resisted the development of a free national life, all have helped to dwarf the minds they have so assiduously refined, all have resisted the natu- ral development of a race which probably contains within it the largest possibilities of original and noble life. All have striven with their utmost energies to keep up the evil faith that Heaven has committed the guidance of mankind to the mem- bers of a limited caste, now so interwoven as to be almost a single family, which, possessing for a thousand years a mono- poly of the highest form of action, has in that time failed to produce one benefactor to mankind. In the long stream of European history not one of this caste has ever received by popu- lar acclaim the epithet "Good," but one lives in history under the title of the "Wise." So intensely has the evil effect of the Princelings' influence been felt, that for fifty years no subject of theirs has risen high enough in the mental world to think out a political reform without making their extinction the inevitable datum of his dream. And now they are gone, gone without a blow on their own soil for the independ- ence of which they were so proud, and though the real, battle has yet to be fought, we still, reading by the light of history, believe they can never return. The secret of their uselessness has been revealed too publicly. The sceptres so powerless against the Prussian bayonet would have been as impotent against the Cossack sabre. Even if Austria wins, she will find in her hour of victory, as she found in 1850, that dependent kings are the least valuable of allies, the most troublesome of subjects; and Austria, though she may get her compensation, will not in this sense win. Already the Prussian Liberals see that their day-dream is about to be. realized by their greatest foe, and forgive the iron roller which, crushing so many of their convictions, has made a road for all their aspirations. Already the Premier sees that only by the assent of the people can the structure which he is rearing be consolidated, and pledges himself and his master to the Par- liament which, while it will invest the Hohenzollerns with the Imperial Crown, will also realize the first aspiration of every German thinker. The defeat of North Germany, if accomplished,. must be the work of many campaigns, and the nation, if united even for a year, will not again bear to be dismembered on behalf of a caste which at the first cannon-shot scuttled out of their homes to seek what for them at all events is the pro- tection of a foreign power. They may settle among their old subjects as great nobles. They may receive half the vast estates which, though attached to their crowns, they have treated as

private property. They may occupy as wealthy and privileged subjects an immense position among a great race, a position, if they will surrender their ruinous theory of intermarriage, even greater than that of English peers, because more visibly one of leadership. They may run a career as long and far more useful than that which has ended in this strange stampede, but they cannot again carve out Germany into estates for them to rule, half as modern kings half as medieval barons. Their work has been done, their time has passed, and with the occu- pation of Dresden the German Confederation, the league which for fifty years has in Central Europe maintained at once peace and tyranny, civilization and petty Courts, free thought and political serfdom, prosperity and princes, public order and enor- mous armies, commerce and the ascendancy of soldiers, has, we believe, finally ceased to exist.