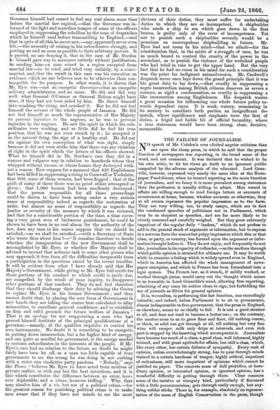 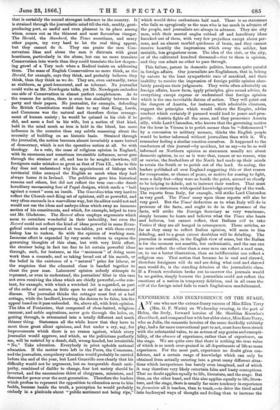 THE FAILURE OF JOURNALISM.

NO speech of Mr. Cobden's ever elicited angrier criticism than one upon the cheap press, in which he said that the proper function of newspapers was reporting, in the broad sense of the

word, and not comment. It was declared that he wished to be his own critic, to let his views go forth to an ignorant public unspoiled by the adverse analysis of the educated. Lord Gran- ville, however, expressed very nearly the same idea at the News- paper Fund dinner, when he treated reporting as the main function

of journalism, and we fancy it is more prevalent among statesmen than the profession is usually willing to admit. Men versed in affairs are willing enough to read foreign letters or accounts of occurrences at home, because, whether accurate or otherwise, they at all events represent the popular impression as to the facts. They are very willing, too, to study essays, which are in fact the condensed speeches of politicians not in Parliament, which may be as eloquent as speeches, and are far more likely to be closely reasoned and carefully weighed. But they grow extremely impatient of the regular daily "leaders," which do not profess to add to the general stock of argument or information, but to express in a nervous form the somewhat pulpy impression which this or that class, or party, or country, has formed upon the argument or infor- mation brought before it. They do not enjoy, and frequently do not like, journalism in its capacity of cullender,—as the medium through which public opinion is strained for ultimate use. It may be worth while to examine a feeling which is widely spread even in England, which in America has affected the whole management of news- paper enterprise, and which in France has been formulated into a legal system. The French law, as it stands, if mildly worked, or worked through juries, would carry out the thought which seems to us traceable in Lord Granville's mind, allowing free reporting, admitting of any essay its author chose to sign, but forbidding the use of journals as filters for general opinion.

which would drive enthusiasts half mad. There is no statesman who fails so egregiously as the man who is too much in advance of the people, and journalists are always in advance. They are city men, with their mental angles rubbed off and hereditary ideas knocked out of them, with very few prejudices except about per- sons, and an almost morbid quickness of brain, and they cannot receive heartily the impressions which sway the solider, less mutable, less gregarious mass. The idea of the club, or the city, or of the cultivated hundred thousand—that to them is opinion, and they can admit no other to pass through.

This failure, patent in domestic politics, becomes quite painful in foreign affairs. Our journalists are Englishmen, that is, belong by nature to the least sympathetic race of mankind, and their inability to receive the impression of foreign public opinion abso- lutely paralyzes their judgments. They write often admirably on foreign affairs, know facts, apply principles, give sound advice, do everything except express or understand that foreign opinion which is the one inevitable datum of action. They will point out the dangers of Austria, for instance, with admirable clearness, suggest the principles which would relieve the Empire, advise conduct which certainly if pursued would lead to peace and pros- perity. •Austria fights all the same, and they pronounce Austria silly, while Lord Clarendon, who knows that the governing motive for the hour in Vienna is to perish sooner than be " dishonoured " by a concession to military menace, thinks the English people would be better informed without journalism than with it. We remember feeling a similar emotion ourselves. It happened to the conductors of- this journal—by accident, let us say—to be as well informed on Northern opinion as statesmen usually are about domestic opinion, to see as it were that, reason or no reason, wise or unwise, the freeholders of the North had made up their minds to retain the South or to perish out of the land. So seeing, the leaders published all over England suggesting this or that reason for compromise, or chance of peace, or motive for ceasing to fight,. were a daily fret—they were so beside the point, seemed so clearly to be helping to delude, not to instruct their readers. That must happen to statesmen with special knowledge every day of the week. The reports from Italy, for example, will strike Lord Clarendon as very good. The Times' essay upon those reports will also be very good. But the Times' deduction as to what Italy will do in presence of the facts, and ought to do in the presence of the facts, will strike the Foreign Secretary as very wearisomer simply because he hears and believes what the Times also hearts and believes, but cannot reflect, that Italians will to take- Venice if they are all hanged in consequence. Those articles, sts far as they essay to reflect Italian opinion, will seem to him deluding, and to a great extent doubtless will be deluding. The journalist is sensible, in the English view of sense, but the Italian is for the moment not sensible, but enthusiastic, and the one can no more reflect the other than a sane man can reflect a mad man, or, to use a better illustration, than an indifferentist can reflect a religious one. That notion that because he is cool and shrewd, therefore foreigners will do and are doing what cool and shrewd men would do, is the standing delusion of the journalistic class. If a French revolution broke out to-morrow the journals would be no guides, simply because the journalists could not reflect the emotions of a nation in temporary delirium, and in all cases the will of the foreign mind fails to reach Englishmen unadulterated.