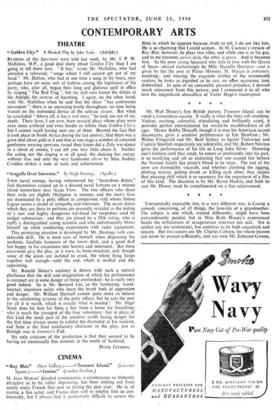 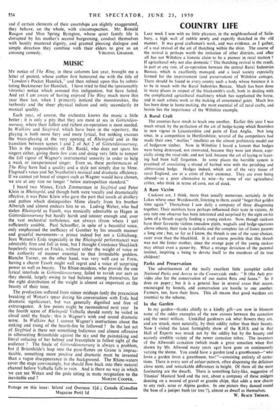 "Ruy Blas." (New Gallery.) —44 Treasure Island." (Leicester Square.)--“ Louisa." (London Pavilion.) M. JEAN MARAIS' dimpled countenance, a countenance so blatantly attractive as to be rather depressing, has been smiling out from nearly every French film sent us during the past year. He is, of course, a fine actor, and France does well to employ him so con- tinuously, but I always find it particularly difficult to review the films in which he appears because, truth to tell, I do not like him. He is so charming that I could scream. In M. Cocteau's version of Ruy Bias, however, he plays two roles, and while one is in his gay, and to me tiresome, gamin style, the other is grave. And it becomes him. As the poor young Spaniard who falls in love with the Queen of Spain—played enchantingly by Mlle. Danielle Darrieux—and is given by her the post of Prime Minister, M. Marais is extremely touching ; and wearing the exquisite clothes of the seventeenth century he looks as dignified as he can, on other occasions, look dishevelled. In spite of an untamable personal prejudice, I derived much enjoyment from this picture, and I commend it to all who love the magnificent absurdities of Victor Hugo's masterpiece.

* * * * Mr. Walt Disney's first British picture, Treasure Island, can be voted a tremendous success. It really is what the boys call smashing. Violent, exciting, colourful, stimulating and brilliantly acted, it provides perfect entertainment for would-be swashbucklers of all ages. Master Bobby Driscoll, though it is true his American accent disconcerts, gives a sensitive performance as Jim Hawkins ; Mr. Walter Fitzgerald and Mr. Basil Sydney as Squire Trelawney and Captain Smollett respectively are admirable, and Mr. Robert Newton gives the performance of his life as Long John Silver. Shivering one's timbers until they creak, he enters so profoundly into his part, is so terrifying and yet so endearing that one cannot but believe the Newton family has pirate's blood in its veins. The rest of the crew are formidably uncouth, and whether climbing the rigging, plotting mutiny, getting drunk or killing each other, they inspire that pleasing chill which is so necessary for the enjoyment of a film of this kind. The direction is by Mr. Byron Haskin, and both he and Mr. Disney must be complimented on a fine achievement.

Unexpectedly enjoyable, too, in a very different way, is Louisa, a comedy concerning, of all things, the love-life of a grandmother. The subject is one which, treated differently, might have been extraordinarily painful, but in Miss Ruth Hussey's experienced hands the tribulations of sexagenarian romance are safe. She is neither coy nor sentimental, but contrives to be both coquettish and sincere. Her two suitors are Mr. Charles Coburn, for whom heaven can never be praised sufficiently, and our own Mr. Edmund Gwenn,

and if certain elements of their courtships are slightly exaggerated, they behave, on the whole, with circumspection. Mr. Ronald Reagan and Miss Spring Byington, whose quiet family life is disrupted by his mother's second burgeoning, conduct themselves with hastily mustered dignity, and granted pleasing dialogue and simple direction they combine with their elders to give us an