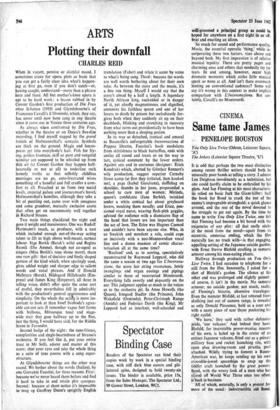 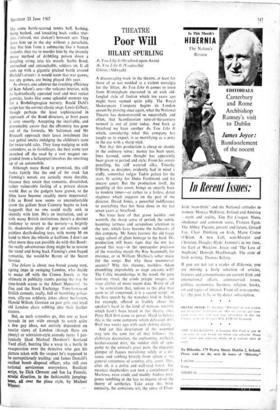 The Jokers (Leicester Square Theatre, `U') It is odd that perhaps the two most distinctive among recent thriller writers should both be unusually poor hands at telling a story. I admire Len Deighton inordinately as a technician, but one could hardly claim to be enthralled by his plots. And Ian Fleming at his most characteris- tic relied on basic Jack the Giant-killer: half the book for Bond to crack the nut of the enemy's impregnable stronghold; a quick glance around, and the rest of the novel devoted to the struggle to get out again. By the time he came to write You Only Live Twice, one felt that Fleming had become a bit bored with the exigencies of any plot: all that really sticks in the mind from the novel—apart from its eccentric, amnesiac ending, which the film naturally has no truck with—is that engaging, appalling setting of the Japanese suicide garden, with Ernst Stavro Blofeld strolling in samurai armour among his man-eating plants.

Halfway through production on You Only Live Twice, I had occasion to telephone for a still from the film. Innocently, I asked for a shot of Blofeld's garden. The silence at the other end was prolonged and slightly pained: of course, it isn't in the movie. No samurai armour; no suicide garden; not much, really, of Fleming's bizarre, obsessive travelogue. Even the monster Blofeld, at last released from skulking just out of camera range, is revealed as only Donald Pleasence, bald as a coot and with a nasty piece of scar tissue puckering his right eyelid. `We have,' they said with rather defensive pride, 'our volcano.' And indeed they have. Blofeld, for inscrutable power-maniac reasons of his own, is holed up in the crater of an extinct Japanese volcano, fitted out as a private military base and rocket launching site, with open plan drawing-room and piranha pool attached. Wildly trying to foment a Russo- American war, he keeps sending up his own crocodile-jawed spaceships to snap up the tiddler craft launched by the great powers. Bond, with the weary look of a man who has staved off World War Three once too often, is back in business.

All of which, naturally, is only a pretext for more of the usual : indestructible old Bond,

like some battle-scarred, tennis ball, bashing, being bashed, and knocking back vodka mar- tinis ('stirred, not shaken') between sets. They leave him up in the sky without a parachute, they fire him from a submarine like 'a human torpedo; they try to murder him by the insanely messy method of dribbling poison down a dangling string into his mouth. Sorbo Bond, untouched and untouchable, soldiers on. It all ends up with a gigantic pitched battle around Blofeld's crater: it would seem that war games, not spy games, are being played this year.

As always, one admires the crushing efficiency of Ken Adam's sets—the volcano interior, with its hydraulically operated roof and neat rocket gantries, looks like some splendid monster toy for a Brobdingnagian nursery. Roald Dahl's script has the correct elastic snap; Lewis Gilbert, though perhaps the least sophisticated in approach of the Bond directors, at least paces it very smartly. Accepting the inevitable, and presumably aware that the effrontery has gone out of the formula, Mr Saltzman and Mr Broccoli approach their latest instalment like two genial uncles indulging the children's taste for twice-told tales. They keep nudging us with reminders; as in Gold finger, the best scene (car snatched off the road by a vast magnet sus- pended from a helicopter) involves the smashing up of an automobile.

Although more Bond is promised, this still looks faintly like the end of the road. Ian Fleming's novels are actually more durable, because they retain that romantic, dissatisfied, rather vulnerable feeling of a private dream world. But as the gadgets have grown, so the films have become steadily more impersonal. Life as Bond now seems so uncomfortable (even the gallant Sean Connery begins to look haggard) that no one could really seek to identify with him. He's an institution, and as with many British institutions there's a distinct tendency to revert to the nursery—a brightly lit, shadowless place of pop art colours and painless death-dealing toys, with nanny M on hand to blow the whistle at halftime. I don't see what more they can possibly do with this Bond: the really adventurous thing might be to reverse the trend and bring back Fleming's own frayed romantic, the would-be Byron of the Secret Service.

The Jokers is about two bored young men, ageing imps in swinging London, who decide to make off with the Crown Jewels as the ultimate in publicity stunts, paving the way by time-bomb scares at the Albert Memorial. the Zo9 and the Stock Exchange. Time-honoured British comedy, really, full of bumbling police- men, silly-ass soldiery, jokes about beefeaters, Harold Wilson, German au pair girls and loyal old London chars sobbing into their feather dusters.

But, as such comedies go, this one at least spreads its net wide enough to catch quite a few gay ideas, not entirely dependent on tourist views of London (though there are plenty) or television-style comedy turns. I par- ticularly liked Michael Hordern's Scotland Yard chief, buzzing like a wasp in a bottle in exasperation over the detective who gets his picture taken with the suspect he's supposed to be surreptitiously trailing; and James Donald's ossified bomb disposal officer, who still sees national servicemen everywhere. Resilient script, by Dick Clement and Ian La Frenais; erratic direction, in the fashionable jumping- bean, an over the place style, by Michael Winner.