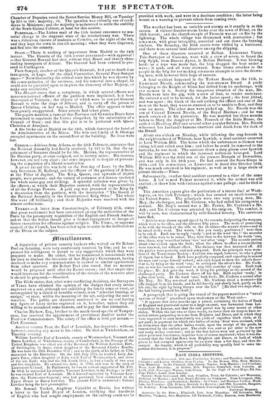 Page 10, 23 March 1844 — A deputation of private country bankers who waited on Sir
Close

A deputation of private country bankers who waited on Sir

Robert Peel on Saturday, were very courteously received by him; and he ex- pressed his willingness to attend to any suggestions which they were prepared to make. He added, that he considered it inconsistent with his duty to disclose the intention of her Majesty's Government, having declined to make any communication in answer to similar applications from other quarters. Sir Robert Peel also stated, that no measure would be proposed until after the Easter recess ; and that ample time would intervene for the consideration of the details of the measure after it should be proposed.—Standard.

The Globe states, that, after some conflicting decisions, the Surveyors of Taxes have obtained the opinion of the Judges that every device engraved on a seal, although not exhibiting the family arms or crest, or accompanied by a shield or heraldic colours, is an "armorial bearing, or ensign," or crest, within the meaning of the act, subjecting the user to taxation. The public are therefore cautioned to use no seal having any figure or fancy device engraved on it, hereafter, unless they are willing to be accounted arms-hearers, and to pay for that distinction.

Charles Mathew, Esq., brother to the much-loved apostle of Temper- ance, has received the appointment of provisional Auditor under the Poor-law Commissioners. The salary of the office is 500/. per annum.— Cork Examiner.

Another veteran Peer, the Earl of Lonsdale, has departed ; without, however, creating any move in his crder. He died at Twickenham, on Tuesday evening.

William Lowther Earl of Lonsdale, county of Westmoreland. Viscount and Baron Lowther, of V hitehaven, county of Cumberland, in the Peerage of the United Kingdom, was eldest sun of the Reverend Sir 11 illiam Lowther, Bart., of Swillingtcn, by Anne, eldest daughter of the Reverend Charles Zouche. Be was born the 29th December 1737 ; and on the death of his father, in 1788, succeeded to the Baronetcy. On the 12th July 1781, he married Lady Au- gusta Face, eldest daughter c.f Jam ninth Earl of Westmoreland, and sister of the late Earl; who died the Gth Jlarch 183S: he Lad a family of two suns and five daughters. He entered the Army in 1794, and ruse to the rank of Lieutenant-Colonel. In Parliament, he was an earnest supporter of Mr. Pitt. In 1802, he succeeded his relative, Viscount Lowther, in the Peerage: in 1807, he was created Earl of Lonsdale. Be is himself succeeded by Viscount Low- ther, the Postmaster-General ; who had previously been summoned to the Upper House as Baron Lowther. The 'resent Earl is unmarried ; Colonel Loather being the heir presumptive.

Mr. Samuel Tucker, Anglican Catechist at Rotten, has written a letter to the Lord Mayor of London, notifying that hundreds of English who had sought employment on the railway could not be

provided with work, and were in a destitute condition ; the letter being meant as a warning to prevent others from coming over.

The weather has been as variable and stormy as it usually is at this season. A violent thunder-storm broke over the town of Douai, on the 12th instant ; and the church-steeple of Fressain was set on fire by the lightning. The whole village was threatened with destruction ; but some men, with great intrepidity, ascended and cut down the burning timbers. On Saturday, the Irish coasts w ere visited by a hurricane, and there were several fatal disasters among the shipping.

One of these disasters occurred at Belfast. Lieutenant Victor, Tide-Surveyor of Customs, went with a crew of seven, to board the brig Sylph, from Buenos Ayres, in Belfast Harbour. It was blowing hard : as a rope was made fast, the brig dragged the boat under a wave ; it sank, and all were drowned. Some blame attaches to the people in the brig for not making strenuous attempts to save the drown- ing men, with however little hope of success.

A fatal accident happened in the Torbert Roads, on the Ilth, to Lieutenant Nicolls, commanding the war-steamer Dwarf. A yacht belonging to the Knight of Glinn had drifted from its anchorage, with one seaman in it. Seeing the dangerous situation of the man, Mr. Nicolls went into his gig, with a crew of four, to render assistance. He ordered a sail to be hoisted, for the better speed ; the beat jibbed, and was upset : the block of the sail striking the officer and one of the men on the bead, they w ere so stunned as to be unable to float, and they rose no more. The other men were picked up. Mr. Nicolls was the son of' Colonel Edward Nicolls, of the Royal Marines ; and he was much esteemed in his profession. He was married but three months before to Nary the daughter of Mr. Peacock of the India House, the Whir of Bead/cog Hall and several other popular fictions. Mrs. Nicolls witnessed her husband's humane exertions and death from the deck of the Dwarf.

About one o'clock on Monday, while following the stag-hounds in the neighbourhood of "Whitton, near Ipswich, a fatal accident occurred to Lord 'William Hill. The horse which the unfortunate nobleman was riding fell and rolled over him ; and before be could be removed to the barracks, he was dead. The accident threw a deep gloom over Ipswich and the regiment to which the deceased nobleman belonged. Lord William Hill was the third son of the present Marquis of Downshire, and was only in his 28th year. He had entered the Scots Greys in 1834 ; and his commission as Lieutenant is dated 21st October 1836. He was much esteemed in his regiment, as well as by a large circle of private friends.— Times.

Subsequently, another fatal accident occurred to a rider of the same horse. A lad named Palmer mounted it, while the animal was still excited ; it threw him w ith violence against some palings ; and he died at night.

The American papers give the particulars of a recent duel at Wash- ington, on the 15th February ; which has created no small interest in the United States. The principals were two very young men, Mr. May, the challenger, and Mr. Cochran, who had called his antagonist a coward. Mr. May's second was a Mr. Pooler, Mr. Cochran's a Mr. Ash ; and Mr. Cochran was attended by his surgeon. The combat, it will he seen, was characterized by cold-blooded ferocity. The survivors have fled.

" Articles were drawn up and signed by the seconds, designating the weapons, which were to be rifles, and the distance fifty paces. The mode of proceeding to be with the breech of the rifle to the shoulder—the muzzle down—and to be raised at the word. The words, 'Are you ready, gentlemen 1' were then to be asked. Each was to reply ' ready '; and at the word 'fire the muzzles of the rifles were to be raised. They were then to fire between the words 'one, two, three, stop '—neither before 'one' nor after 'stop.' The seconds arrived about nine o'clock upon the field; when the efforts to effect a reconciliation were renewed, but without effect. The distance was then measured off. AU the parties were perfectly cool and composed. Both the principals were mem- bers of the Temperance Society : Cochran was urged, however, to take a glass of liquor, but refused. Both were perfectly composed, each expecting to wound his man and escape himself unhurt ; and each hoped to draw the other's fire— that is, by firing at the word one,' to anticipate the other's fire. Mr. Coch- ran, as was his custom, continued to sing little snatches of songs. Each took his place ; Mr. Ash gave the word, it being his privilege as the second of the challenged party. Mr. Cochran threw off his bat. Both replied •ready,' in a fine clear voice. At the word 'one,' both fired ; Mr. Cochran a second after Mr. 1ulay. Mr. May remained unhurt. Mr. Cochran stood a moment—hie rifle dropped frcm his bands, and be fell heavily and slowly back, partly on his left side, the right leg being thrown over the left." [He died two days after ; the ball having pierced his skull.] A paragraph that is going the round of the papers mentions a "novel system of fraud " practised upon tradesmen at the West end- " It appears that some months ago a parcel, containing the halves of Bank of England and provincial notes to a large amount, was forwarded from Lei- cestershire to London, and that the said parcel was by some means or other stolen. 'Within the last two or three weeks, no fewer than six drapers have re- ceived letters purporting to come from Brighton and Dover, and in which they- were requested to send immediately ten yards of superfine black cloth, at IL per yard; in payment for which two halves of stolen • fives' were enclosed, with an intimation that the other halves would, upon the receipt of the goods, be transmitted by the earliest post. The cloth was sent as per order to the new and ready-money customer ; and as the first halves were not perfected by the other promised remittance, inquiries were of course instituted; when it was die- covered that the bird bad flow n from Brighton and Dover, at both of which places be bad occupied spat tnunts for no more than a few day s, and then de- camped. An inquiry, which in all probability may speedily lead to some im- portant disclosures, is in progress."