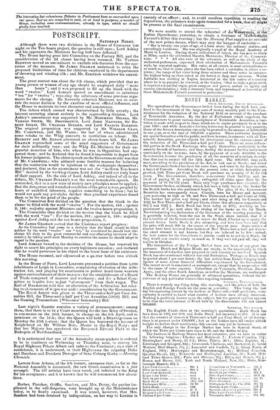 We were unable to attend the rehearsal of La AllfagrA - itri

Italian Operahouse, yesterday, to obtain a foretaste of lalfrollititteek. Favanti's debut this evening ; but the. Morning Post supplies an account of the new prima donna, which may stay the hunger of curiosity- " She is twenty-one years of age, of a form above the ordinary stature, and exceedingly handsome. She was originally a pupil of the Royal Academy of Music in London. Having shown indications of talent, she was sent to study at Milan, under the celebrated Maestro Mezzocato, Director of the Conserva- toire. * • • All who were at the rehearsal, as well as the whole of the orchestral performers, expressed their admiration of Mademoiselle Favanti's sty le, by repeated applause. Her voice, at all events, is most extraordinary— so much so, that in some places she has been called a contralto, in others a so- prano; the range of her voice being three octaves and three notes in extent— the highest being as clear-toned as the lowest is deep and sonorous. Whilst Lablache was residing at Naples, interested in the fair native of a country where he is so popular, he observed, at the Casino, that to make a great artist, it required a beautiful organ, great compass and power, united to agility and smorza, (modulation,) with a dramatic form, and impassioned action—that all these Mademoiselle Favanti possessed in perfection.' "