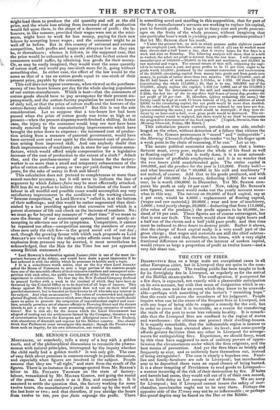 THE CITY OF FIRES.

DESTRUCTIVE fires on a large scale are exceptional cases in all other European cities, but in Liverpool they are quite in the com- mon course of events. The reading public has been taught to look for its fortnightly fire in Liverpool, as regularly as for the arrival of the Halifax steam-packet. The conflagration, if postponed for a few days, is expected, not exactly with a pleasurable anticipation on its own account, but with that sense of resignation which is ex- cited when men wait for an event which they know to be unavoid- able—perhaps with something of the better's " trembling hope" that the event will prove the soundness of his judgment. People inquire what can be the cause of the frequent fires in Liverpool, not with any hope of being able to suggest a remedy for the evil, but in order to prove that it is incurable, as a reason for transferring the trade of the port to some less volcanic locality. It is remark- able that the Liverpool fires are confined to the region of stores and warehouses : the citizens can protect their dwelling-houses. It is equally remarkable, that the inflammable region is nearest to the Mersey—the least elevated above its level ; and consequently affords greater facilities than any other in Liverpool for arrange- ments for extinguishing fires. Experience, we should fancy, must by this time have suggested to men of ordinary powers of appre- hension the circumstances under which the fires originate, and the best means of prevention. And yet the fires blaze as briskly and frequently as ever, and as uniformly burn themselves out, instead of being extinguished. The case is clearly a hopeless one. Fami- lies and family-furniture are safe in Liverpool ; but merchandise sent to be deposited there runs an equal chance of being burned. It is a sheer tempting of Providence to send goods to Liverpool— a wanton incurring of the risk of their destruction by fire. If bales and barrels had sense, they would roll out of it of their own accord, with as little delay as Lot escaped out of Sodom. We are sorry for Liverpool ; but if Liverpool cannot insure the safety of mer- chandise, merchandise ought not to be sent there. Perhaps the opposite side of the Mersey may not be so inflammable ; or perhaps fire-proof depots may be found on the Dee or the Ribble.