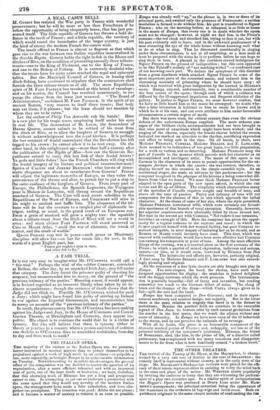 THE majority of the visiters at the Italian Opera are, we presume, better instructed in musical matters than to permit themselves to be prejudiced against a work of high merit by an accident—so palpable a one, more especially, as brought Zampa to an unfavourable termination on Tuesday. Notwithstanding its manifold disadvantages, the general effect of the composition was too decided to render the question of its reproduction, after a more efficient rehearsal and with an improved cast of parts, one of the least doubt or hesitation : we hope, therefore, that this charming work of HEROLD has yet a long and prosperous career to run. In attempting to get out so elaborate a production with the same speed that they would any novelty of the modern Italian opera, the management have made a false calculation, and been alto- gether too precipitate. the intention was good: Adelia did not please ; and it became a matter of anxiety to remove it as soon as possible. Zampa was already well " up," as the phrase is, in two or three of its principal parts, and awaited only the presence of Foal:sasses: a sadden resolution is formed to do without him : his part is transferred to Signor • FELICE ; who on the morning before, at rehearsal, is so little at home in the music of Zampa, that every one is in doubt whether the opera must not be changed: however, at night we find him in the Pirate's costume—the red cloak and slouched hat, trying to face it out, but with his part evidently still to learn, and in the awkward predicament of a man attracting the eye of the whole house without knowing well what to do or what to sing. That he distonated considerably in singing under these circumstances, is not at all surprising, as a man mast at least be prepared with the notes he is to perform before he can hope to sing them in tune. A placard in the corridors craved indulgence for Signor FELICE on the ground of indisposition ; but this soon appeared to be like Falstaff's malady of " not marking withal "—a confirmed case of not knowing one's part. We deduce the symptoms of this disorder from a great dumbness which attacked Signor FELICE in some of the most important parts of the concerted music, and reduced him to the distressing necessity of grimacing where he should have sung ; all which was received with great indignation by the learned in HEROLD'S score. Zampa entered, unfortunately, into a considerable number of the best scenes of the opera ; through each of which a coldness was diffused by the ill-suppressed impatience and frequent sibilation of the gallery. In justice to Signor FELICE, we must however confess, that we have as little heard him as the music he attempted: we doubt whe- ther a false intonation is habitual to him in music he knows and in which he is at his ease, and can even attribute to him under favourable circumstances a certain degree of merit.

But there was more room for critical censure than even the obvious defects of the unfortunate Zampa supplied. The more arduous pas- sages of the brilliant violin accompaniments had not been brought to that nice point of exactitude which might have been wished ; and the singing of the chorus, especially the female chorus behind the scenes, betrayed too marked an attention to the rhythm, sacrificing expression and effect to being safe in the time. On all hands, in short, save Madame PERSIAN!, CORELLI, Madame Bnialai, and F. LABLACHE, there seemed to be indications of too great haste, too little preparation, for a work so various and so deserving. Madame PERSIANI sang the part of Camilla in the manner which accords with her character as an accomplished and intelligent artist. The music of this opera is too German in the character of its score to permit opportunities for the exs tempore fioriture in which she excels: she was content, therefore, to display herself on this occasion in the simple cantabile style. As au intellectual singer, she made an advance by this performance ; but the composer imagined in the physique of his heroine a being somewhat dif- ferent from what we found. We must think Madame PERSIANI better adapted to the open parts of the new opera solmol, in which she can invent and fill up ad libitum. The simplicity which characterizes many of the melodies of Camilla requires weight and breadth of tone, and above all the tone of passion. Parity and delicacy of tone will not compensate for the absence of this in airs which approach the ballad character. At the closes of some of her airs, where the style permitted, Madame PERSIANI introduced trills, which were certainly not favour- able specimens of that branch of vocal execution. Generally, however, her superior acquirements were admirably foiled by those around her. Her duet in the second act with CoaFr.r.1, " Nel vedere it sun tormento, ' furnished an example of this. Here the composer has given the oppor- tunity for a regular cadenza to the soprano and tenor ; in which the former acquitted herself with her wonted facility, but poor CORELLI re- mained incapable, in utter despair of imitating her as he should, and as RIJBINI or MARI° would instantly have done. This duet, which was encored with vociferation, would have been more effective had CORELLI less ontsung his companion in point of tone. Among the most effective things of the evening, was a concerted piece on the first entrance of the Pirate ; in which a quartet of mixed expression, ludicrous and serious, occurs,—an idea, as it would seem, borrowed by HEROLD from Don Giovanni. The harmonies and effects are, however, perfectly original. A duet sung by Madame BELLINI and F. LABLACHE was also exceed- ingly pleasing and original.

All the resources of a fine lyric theatre are ably brought into play in Zampa. The solo-singers, the band, the chorus, have each well- designed opportunities for display : the musician is indeed delighted with the happy contrasts which the work presents. The instruments,- tion is generally beautiful—full of fancy and invention, but tending somewhat too much to the German defect of noise. The clang of brass and the thumps of the drum—which Cost& always gives us in full—split the ears and the bead.

Zampa has been compared to Don Giovanni; and in their super- natural machinery and musical design, not unjustly. But in the latter there is the same relation to tragedy that there is in the former to melodrama. Besides the poetical faith we entertain in the venerable legend of Don Juan, its horrors arise by such natural gradations from the murder in the first scene, that we reach the climax without any sense of absurdity. In Zampa we have seen none of the ill behaviour to the statue, and do not perceive the rationale of its revenge.

With all its faults, this piece is an honourable monument of the dramatic musical genius of France ; and, unhappily, not less so of the personal infelicity of the composer's profession. HixoLo, the friend of BOIELDIEU, died, like him, in the prime of life, of a disorder called pulmonary, bus complicated with too many vexations and disappoint- ments to be far from what is here familiarly termed " a broken heart."