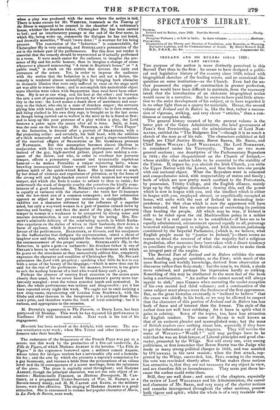 Page 15, 23 March 1844 — The endurance of the frequenters of the French Plays was
Close

The endurance of the frequenters of the French Plays was

put to a severe test this week by the production of a five-act vaudeville, La Fille de Figaro, of which Madame ALBERT is the heroine. "La Fille de Figaro " is the cognomen bestowed upon a milliner named Aspasie, whose talent for intrigue renders her a serviceable ally and a formida- ble foe ; and the arts by which she procures a captain's commission for a gay lieutenant, and rescues a bride from the persecutions of an odious lover and the ill consequences of a secret marriage, form the substance of the piece. The piece is capitally acted throughout ; and Madame ALBERT, though the principal character, was not the sole object of at- tention : Mademoiselle FORGEOT, as Madame Buonaparte, M. CAR- TIGHT, as a pragmatical Under-Secretary of War, M. Beattun as a Revolutionary dandy, and M. M. Ge.sxcei and BAZIN, as the military lovers, were also effective. The singing of Madame ALBERT is a great attraction. She is announced to resume her popular character of Marie, in La Perle de Savoie, next week.