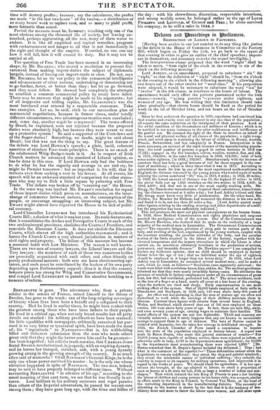 Page 2, 23 March 1844 — BERNADOTTE is gone. The adventurer who, from a private soldier
Close

BERNADOTTE is gone. The adventurer who, from a private soldier

in the armies of France, raised himself to the throne of Sweden, has gone to the tomb ; one of the long-reigning sovereigns of history whose lives have been a benefit and a safeguard to their country. Had he lived in earlier times, he might have ranked with the greatest among those who have been fathers to their people. He lived in a critical age, when not only broad results but all petty details are studied : his military predilections have been scanned; his little squabbles with newspapers, arbitrarily conceived but pur- sued in no very bitter or tyrannical spirit, have been made the most of; his " ingratitude " to NAPOLEON—that is, his withholding blind and dishonest submission from the man who made others great only that they might the better serve him and he be greatest— has been magnified : but still the truth remains, that CHARLES JOHN found Sweden revolutionized, in jeopardy, with an expiring dy nasty ; and he leaves her tranquil, enriched, safe, with a young dynasty growing strong in the growing strength of the country. Is as much often said of monarchs ? Of all NAPOLEON'S General-Kings, he is the only one whose power survived his master : he is the only one whose elevation happened in spite of N.aroLzoN. The two men, indeed, may be said to have properly belonged to different times. Without accounting BERNADOTTE " in advance of his age," according to the venal meaning of that cant term, we see that he was literally in ad- vance. Less brilliant in his military successes and regal parades than others of the Imperial adventurers, he passed for second-rate among them ; they have gone long ago, with the fetes and follies of the day : with his shrewdness, discretion, respectable intentions, and strong worldly sense, he belongedi rather to the age of Lours FHlir.WEE anti LROPOLDs of Ginzox and PEEL ; he alone survived his company, to be still a ruler in 1844.