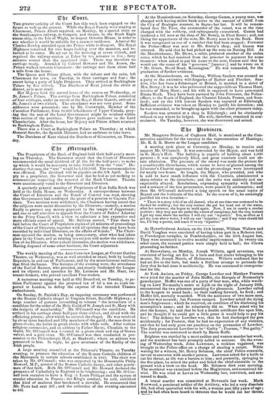 The Proprietors of the Bank of England held their half-yearly meet- ing on Thursday. The Governor stated that the Court of Directors recommended the usual dividend of 31. lOs. for the half-year; to make up which it would be necessary to take 10,6031. from the "rest." De- ducting that sum, the " rest " would be 3,159,9661. The recommendation was affirmed. The dividend will be payable on the 6th April. In re- ply to a proprietor, the Governor said that he bad as yet nothing to communicate respecting the renewal of the Bank Charter. Thanks -were unanimously voted to the Governor and Directors.

A quarterly general meeting of Proprietors of East India Stock was held at the India House, on Wednesday. A correspondence between the Court of Directors and the Board of Control was read, showing that Government had confirmed the grant of a pension to Captain Pat- fison. Two motions were withdrawn, the Chairman having stated that the subjects were under discussion by the Directors,—namely, a motion Snally to prevent any money-payment to the temple of Juggernaut; and one to call attention to appeals from the Courts of Sudder Adawlut to the Privy Council, with a view to substitute a less expensive and more efficient court of appeal. Mr. Sullivan moved, " That there be -laid before the Court of Proprietors copies of all minutes of proceedings of the Court of Directors, together with all opinions that may have been recorded by individual Directors, on the affairs of Scinde." The Chair- man opposed the motion, as being unnecessary, after what had taken place in the Court, and as relating to a subject still under the considera- tion of the Directors. After a short discussion, the motion was withdrawn. Having disposed of some other business, the Court adjourned.

The weekly meeting of the Anti-Corn-law League, at Covent Garden Theatre, on Wednesday, was as well attended as usual, both by leading Repeaters, in and out of Parliament, and by the miscellaneous audience that filled the house. The features of the evening were, the attendance of the Earl of Radnor, who presided, and stoutly vindicated the League and its objects ; and speeches by Mr. Latimore and Mr. Hunt, two tenant-farmers, who proved excellent Free-traders.

A numerous meeting was held at Old Brentford, on Tuesday, to pe- tition Parliament against the proposed tax of 5d. a ton ou coals im- ported at London, to defray the expense of the intended Thames -embankment.

On Sunday, St. Patrick's Day, an imposing ceremony was performed at the Roman Catholic chapel in Virginia Street, Ratcliffe Highway ; a large number of persons assembling to witness " the investiture of a -candidate for the order of the Holy Guild of St. Joseph and St. Mary with --the insignia of membership." Mr. O'Connell was the candidate. He -arrived in his carriage about half-past three o'clock, and dined with the officiating priests; after which he entered the chapel. He was received 'by about three hundred and fifty members of the guild ; the men drest in -green cloaks, the ladies in green cloaks with white veils. After various religious ceremonies, and an address by Father Moore, Chaplain to the Gadd, Mr. O'Connell was invested in a green cloak and cap of Genoa -velvet, and a gold cross. Mr. O'Connell was then conducted in pro- cession to the Philanthropic Hall, at Shadsvell ; where an address was :presented to him. Iu reply, he gave assurance of the fidelity of the Irish people.

A large meeting assembled at the Princess's Theatre, on Tuesday evening, to promote the education of the Roman Catholic children of .the Metropolis in certain schools established in 1840. The chair was -taken by Mr. O'Connell ; who was supported by the Honourable Philip Howard, M.P., several of the Roman Catholic clergy, and other gentle- - men of that faith. Both Mr. O'Connell and Mr. Howard declared the prospects of Catholicity in England to be brightening ; and Mr. O'Con- nell took occasion to have a fling at Louis Philippe and the system of secular education in France : the King's conduct, he said, exhibited that kind of madness that betokened a downfal. He announced that 3141r. Petre had sent 20/. ; and the collection of the evening amounted 10 66L

Vie (Tourt. At the Mansionhouse, on Saturday, George Gumm, a young man, was charged with having stolen bank-notes to the amount of 2,0001. from the City of Boulogne steamer, in September last. It will be remem- bered that Mr. Tune, the commander of the vessel, was at the time charged with the robbery, and subsequently exonerated. Gumm had tendered a 101. note at the shop of Mr. Storey, in Fleet Street ; and, not liking the appearance of the note, Mr. Storey sent it to the Bank. Here it was recognized as one of a number that had been stopped : Forrester the Police-officer was sent to Mr. Storey's shop; and Gumm was arrested. He said that he had picked up the note on Notting Hill. At the Mansionhouse, Mr. Blews, a tailor, produced another of the stolen notes, which he had received from the prisoner in payment for some trousers : when asked to put his name to the note, Gumm said that he would put the name of his " governor," [master ;] and he wrote on it " Mr. Green, Board Road, Kennington." He was remanded, for the production of further evidence.

At the Mansionhouse, on Monday, William Sanders was accused as a party to the extensive will-forgeries of Barber and Fletcher. San- ders, who has been a fishmonger at Bristol, is married to a sister of Mrs. Dorey: it was he who personated the supposititious Thomas Hunt, relative of Mary Hunt ; and his wife is supposed to have personated Emma Slack. They have been pursued by John Forrester, the Police- officer, to the South of England, the Channel Islands, France. and Scot- land ; and on the 13th instant Sanders was captured at Edinburgh. Sufficient evidence was taken on Monday to justify his detention ; and he was remanded, to be brought up again with the other prisoners today.

Sanders was arrested at a shop in Edinburgh ; and he obstinately refused to say where he lodged. His wife, therefore, remained in con- cealment. On Tuesday, however, she was discovered and seized.