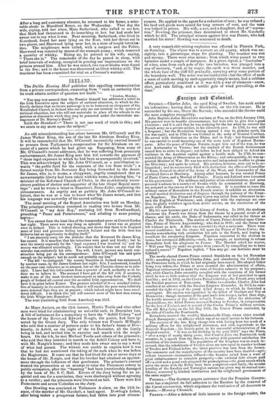 The Bailin Evening Mail publishes this appalling communication from a private correspondent, emanating from " such an authority that its truth admits neither of question nor doubt "—

" You may rest assured that the Premier himself has addressed a letter to the Irish Executive upon the subject of national education, in which he dis- tinctly declares that no future patronage is to be bestowed on clergymen of the Established Church in Ireland who not only are not inimical to the system of national education, but who will not undertake to place all the schools in the parishes or dioceses in which they may be promoted under the immediate ma- nagement of Dr. Murray's Board." Saith the Standard—" There is not one word of truth in this ; and we scorn to say more upon the subject."

An odd misunderstanding has arisen between Mr. O'Connell and Sir James Walker King, the son of the late Sir Abraham Bradley King. It will be remembered that Mr. O'Connell successfully exerted himself to procure from Parliament a compensation for Sir Abraham on ac- count of a patent which he had given up. Supposing, from some of Mr. O'Connell's recent addresses, that he was suffering from pecuniary embarrassment, Sir James King sent him 201. towards the payment of " those legal expenses in which he had been so unexpectedly involved." This was acknowledged by Mr. John O'Connell, as a contribution to- wards " the public fund for the expenses of the late State trials"; a formal receipt from Mr. Secretary Ray being forwarded to the donor. Sir James, who is, it seems, a clergyman, angrily complained that an unwarrantable liberty had been taken with his name, in placing him, "a minister of the Reformed Church of Christ, in the scandalously incon- sistent position of abettor and supporter of the late illegal Repeal meet- ings": and he wrote a letter to Saunders's News-Letter, explaining the circumstances. As angrily and as publicly Mr. John O'Connell re- joined, that he was at a loss to know what Sir James meant, and that his language was unworthy of his sacred calling.

The usual meeting of the Repeal Association was held on Monday. The principal proceedings consisted in reading two letters from Mr. O'Connell to " my dear Ray," enclosing 501. from Newfoundland, preaching " Peace and Perseverance," and alluding to some passing 'topics- " You cannot form the least idea of the transcendant scene at Covent Garden last night. There never was any thing so splendid. I never was so greeted even in Ireland. This is indeed cheering, and shows that there is in England more of kind and generous feeling towards Ireland and the Irish than has hitherto bad an opportunity to display itself." " I am sincerely sorry for the mistake that the Reverend Sir James King has caused. It is manifest that his intentions were good and kindly ; but he sent the money expressly for the ' legal expenses I was involved in,' and the money was allocated accordingly. 1 do wonder that he does not see that the mistake was exclusively his own. You will, I trust, prevent any harsh con- struction being put on his correspondence. John O'Connell has said quite enough on the subject; but he could not probably say less." " The bill ' to extinguish ' the county franchise in Ireland was announced, by another name, by Sir James Graham last night. It is, I understand, founded on the poor-rate valuation as to amount, but on the Chandos clause as to prin- ciple. I have had this information from a quarter of such authority as to in- duce me to believe it. The account 1 have got of the bill will, if accurate, make it one of the moat virulent instruments to take away from the Catholic people of Ireland all control over the so-called Irish representatives. We shall have it in print before Easter. The greatest mischief of it—a mischief indica- tive of insanity in its couttivers—is, that it will render the poor-rates infinitely more detested than they are at present ; which indeed might have been consi- dered difficult. I do think this bill will convert some of the beat men among the Irish Whigs into Repealers."

At Mayo Assizes, on the 12th instant, Martin Toolis and nine other men were tried for administering an unlawful oath, in December last. A hill of indictment for a conspiracy to burn the " Achill Colony " and the house of the Reverend Edward Naugle, the pastor, had been ig- nored by the Grand Jury. The only witness was Francis M'Hugh; who said that a number of persons came to his father's house at Dow- kinelly, in Achill, on the night of the 1st December, all the family being in bed, and invited him to exercise and march with the neigh- bours. On the 6th, he met Michael Toolis and others of the prisoners; who said that they intended to march to the Achill Colony and burn it, with Mr. Nangle's house ; and they made him swear not to say a word of what had passed. The witness was unable to explain how it was that he had not mentioned the taking of the oath when he was before the Magistrates. It came out that he had lived for six or seven days at the house of Mr. Nangle, and that his brother had obtained an appoint- ment through the influence of that gentleman. The prisoner's counsel treated the prosecution as an attempt to raise the Protestant colony in public estimation, after the "humbug" had been irretrievably damaged by the book of Mr. S. C. Hall. Eleven of the Jury being for an ac- quittal and one for a conviction, they were discharged without agreeing to a verdict ; and the prisoners were liberated on bail. There were five Protestants and seven Catholics on the Jury.

One Dowling was convicted at Tullamore Assizes, on the 13th in- stant, of the murder of Mr. Gatchell, a land-agent. Dawling's father, After being rather a prosperous farmer, had fallen into poor circum- stances. He applied to the agent for a reduction of rent ; he was refused ; his land and goods were seized for long arrears of rent, and the mats was lodged in prison. His wife, a son, and a daughter, died of " starva- tion." Dowling, the prisoner, then determined to shoot Mr. Gatchell; which he did. The principal witness against him was Dunne, who ha& married his sister! Dowling was sentenced to death.

A very remarkable mining explosion was effected in Phtnnix Park,. on Saturday. The object was to convert an old quarry, which was un- sightly, into a picturesque slope for planting. The weather was wet and stormy. There were nine mines ; from which wires passed to two batteries under a couple of marquees. At a given signal, a " faseiculus" of wires, nine from each pole of the two batteries, was plunged into a cup of mercury, "and, as by magic, the earth was riven asunder, and the whole face of the cliff fell gradually, carrying away some portion of the boundary-wall. The noise was inconsiderable ; but the effect of such a mass of earth moving by such apparently simple means, had a sublime effect, particularly combined as it was with a war of elements—snow, sleet, and rain falling, and a terrific gale of wind prevailing, at the time."