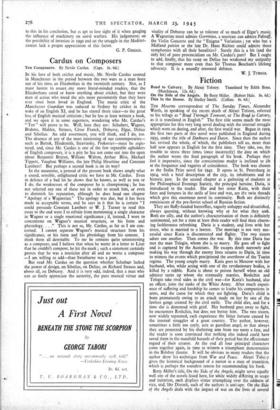 IN his love of both cricket and music, Mr. Nevile Cardus seemed in Manchester in the period between the two wars as a man born out of his time, an Elizabethan in the twentieth century. Not, as I must hasten to assure -my more literal-minded readers, that the Elizabethans cared or knew anything about cricket, but they were men of action who loved the arts more passionately than they have ever since been loved in England. The music critic of the Manchester Guardian was seduced to Sydney by cricket in the wake of an English XI, and he has stayed there since—to the great loss of English musical criticism ; but he has at least written a book, and we open it in some eagerness, wondering who Mr. Cardus's " Ten " will prove to be. Well, here they are : Schubert, Wagner, Brahms, Mahler Strauss, Cesar Franck, Debussy, Elgar, Delius and Sibelius. An odd assortment, you will think, and I do, too. The absence of any of the most interesting of our contemporaries— such as Bartok, Hindemith, Stravinsky, Prokoviev—must be regis- tered, and, since Mr. Cardus is one of the few reputable upholders of English composers, it is a pity he has not come out into the open about Benjamin Britten, William Walton, Arthur Bliss' Michael Tippet', Vaughan Williams, the late Philip Heseltine and Constant Lambert! But perhaps a second book is on its way?

In the meantime, a perusal of the present book shows amply what a sound, sensible, enlightened critic we have in Mr. Cardus. Even in defence of a bad lot he shows that he knows, as well as you or I do, the weaknesses of the composer he is championing ; he has not selected any one of these ten in order to attack him, or even to diminish his reputation, although he does head one chapter "Apology of a Wagnerian." The apology was due, but it has been made in acceptable terms, and he says in it that he is certain "I could persuade Constant Lambert or W. J. Turner to read this essay to the end were I to refrain from mentioning a single character in Wagner or a single emotional significance ; if, instead, I were to concentrate on Wagner's musical structure, or his form and physiology. . . ." This is not so, Mr. Cardus, as far as I am con- cerned. I cannot separate Wagner's musical structure from his significance, or his form and his physiology from his content. I think them all detestable. To me he remains quite uninteresting as a composer, and I believe that when he wrote in .a letter to Liszt that he couldn't compose, he hit the mark ; such a statement certainly proves that he was a musician after all and no worse a composer —I am willing to add—than Swinburne was a poet.

But read Mr. Cardus on the question whether Schubert lacked the power of design, on Sibelius, on Delius, on Richard Strauss and, above all, on Debussy. And it is very odd, indeed, that a man who can so finely appreciate the austerity, the pure musical virtue and

vitality of Debussy can be so tolerant of so much of Elgar's music. A Wagnerian must admire Gerontius, a musican can admire Falstaff, the Violin Concerto and the "Enigma" Variations yet who but a Midland patriot or the late Dr. Hans Richter could admire those symphonies with all their banalities?. Surely this is a bit (and the only bit) of pure provincialism on Mr. Cardus5s part? But I ought to add, finally, that his essay on Delius has weakened my antipathy to that composer more even than Sir Thomas Beecham's lifelong advocacy. It is a soundly reasoned defence.