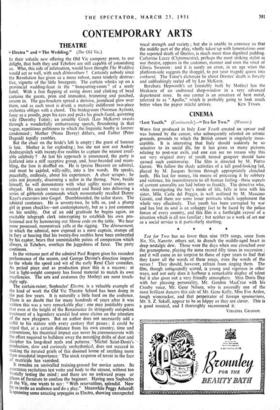 Lost Youth." (Continentals)—"" Tea for Two." (Warner.) WHEN first produced in Italy Lost Youth created an uproar and was banned by the censor, who subsequently relented on artistic grounds, grounds to which the British censor is singularly insus- ceptible. It is interesting that Italy should suddenly be so sensitive to its social ills, for it has given us many pictures relating to post-war evils, and one can see no reason why this not very original story of youth turned gangster should have caused such controversy. The film is directed by M. Pietro Germi. We follow the shady activities of a tall good-looking lad, played by M. Jacques Sermas through appropriately clenched teeth. His lust for money, his means of procuring it by robbery and violence, his insensitiveness to all human feeling—these aspects of current amorality are laid before us frankly. The detective who, while investigating the boy's mode of life, falls in love with his sister, Mlle. Carla del Poggio, is well outlined by M. Massimo Girotti, and there are some lesser portraits which supplement the whole very effectively. That youth has been corrupted by war and has lost its soul is an unhappy fact to be faced by the police forces of every country, and this film is a forthright exposé of a situation which is all too familiar ; but neither as a work of art nor as a social service is it particularly startling.

Tea for Two has no fewer than nine 1929 songs, some from No, No, Nanette, others not, to drench the middle-aged heart in deep nostalgic dew. Those were the days when one crouched over the gramophone, playing the same record fifty times in succession ; and it will come as no surprise to those of riper years to find that they know all the words of these songs, even the words of the verses ! They should, however, refrain from singing them. The film, though antiquatedly scored, is young and vigorous in other ways, and not only does it harbour a remarkable display of talent but it also gives out a very friendly atmosphere. Miss Doris Day with her pleasing personality, Mr. Gordon MacCrae with his Crosby voice, Mr. Gene Nelson, who is assuredly one of the most brilliant dancers this side of Mr. Gene Kelly, Miss Eve Arden, tough wisecracker, and that perpetrator of foreign spoonerisms, Mr. S. Z. Sakall, appear to be as hippy as they are clever. This is a good musical, and I thoroughly recommend it.