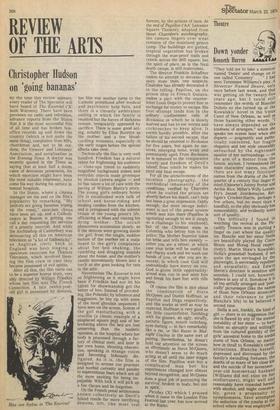 tsy the time this review appears, every reader of The Spectator will have heard of The Exorcist ('X' both Warners). There have been previews on radio and television, advance reports from the States that it is the most successful film of all time and has broken boxoffice records up and down the country (which is not quite the same thing), complaints from MPs, churchmen and, not to be outdone, the Viewers' and Listeners' Association, and serialisation in the Evening News. A doctor was recently quoted in the Times as saying that at least half a dozen cases of demoniac possession, for which exorcism might have been the most suitable treatment, have come his way during his service in mental hospitals.

In the States, where a cinema manager set the seal on the film's popularity by remarking, "My janitors are going bananas wiping up the vomit," exorcism clinics have been set up, and a Catholic centre in Boston is getting one call a day requesting the services of a priestly exorcist. And while the Archbishop of Canterbury was denouncing all this on American television as "a lot of fiddlesticks", an Anglican cleric back in England was busy staging a specimen exorcism for Thames Television, which involved blessing the film crew in case they became possessed of evil spirits.

After all this, the film turns out to be a superior horror story, very ably directed by William Friedkin whose last film was The French Connection. A nice twelve-yearold girl is possessed by demons,

her film star mother turns to the Catholic priesthood after medical and psychiatric help fails, and there is a cleverly ambivalent ending in which the family is reunited but the forces of darkness remain, temporarily appeased by sacrifice. There is some good acting, notably by Ellen Burstyn as the mother, and a few bloodcurdling moments, especially in the early stages before the special effects take over.

Technically the film is very well handled. Friedkin has a natural talent for frightening his audience — close-ups timed to suddenly magnified background noises and everyday objects made grotesque by unusual camera angles — and he has taken a lot of care with the pacing of William Blatty's story. The young girl's ordinary home life is established with talk of school and horse-riding and stealing candies from the kitchen, and is juxtaposed with the solemn rituals of the young priest's life, officiating at Mass and visiting his dying mother. The occult phenomena accumulate slowly, as if the demons were growing inside the girl, from the single, sudden motion of the marker on a ouija board to the girl's complaints about her bed shaking, the rumbling and dragging sounds about the house, and the mother's candle momentarily blown into a torch as she goes looking for rats in the attic.

Nevertheless The Exorcist is not as frightening as it might have been if Friedkin had not let his talent for showmanship get the better of him. Instead of proceeding, like Polanski, by inference and suggestion, he lets rip with some of the most ghoulish sequences I have seen on the screen. Scenes of the girl masturbating with a crucifix (a classic example of a misplaced square peg) and of her levitating above the bed are less unnerving than the realistic episodes, in the hospital where her body is processed through a factory of clinical steel, and later in her own home, shouting obscenities, speaking in strange voices and becoming hideously disfigured. As it is, the film is designed to arouse our prurient and morbid curiosity and pander to superstitious fears which are all the more exciting for being impalpable. With luck it will pick up a few Oscars and be forgotten.

horrors, by the actions of men. At the end of Papillon ('AA' Leicester Square Theatre), adapted from Henri Charriere's autobiography, the camera lingers over what remains of the mainland prison camp. The buildings are gutted, tropical vegetation has broken through the man-proof walls and crawls across the drill square, but the spirit of place, as in the Nazi death camps, is still malevolent.

The director Franklin Schaffner makes no attempt to decorate the story more than, one suspects, Charriere has already decorated it in the telling. Papillon, on the prison ship to French Guiana, makes a pact with the counterfeiter Louis Dega to protect him in exchange for money to escape. His first attempt lands him in the solitary confinement cells of Reclusion in which he is slowly starved and has to eat worms and cockroaches to keep alive. It seems hardly possible, after the failure of his second escape, that he should be returned to Reclusion for five years, but again he survives, emerging lame, weak and prematurely aged. From Reclusion he is removed to the comparative luxury and freedom of Devil's Island, from which he makes his third and final escape.

For all the attractiveness of the location photography, the methodical inhumanity of the conditions, verified by Charriere when he visited the prison set shortly before his death, can't help but leave a grim impression. Oddly enough, the most savage indictment is not of the penal system which sent him there (Papillon is egotistical enough to see it simply as a challenge to his manhood), but of the Christian nuns in Colombia who betray him to the police. The Mother Superior takes his bribe and tells him sweetly — either you are a sinner, in which case your bribe will be useful for our charity work and we wash our hands of you, or else you are innocent, in which case God will undoubtedly have mercy on you. God is given little opportunity: armed men run in and seize him and break his bare feet with rifle butts.

Of course the film is also about the combination of Steve McQueen and Dustin Hoffman, as Papillon and Dega respectively, and this works as well as may be expected. Hoffman is very good as the little counterfeiter, fumbling with his glasses, an ugly, scruffy, pathetic figure, mouth twitching, eyes darting — in fact remarkably like a rat, or like Ratso in Midnight Cowboy in the same sort of pairing. Nevertheless, he doesn't hold our attention on the screen as effortlessly as Steve McQueen, who doesn't seem to do much acting at all until the later stages of the film. Papillon was not a complicated man but his experiences changed him almost beyond recognition, and McQueen does a good job of portraying the survivor, broken in body, but not in spirit.

Payday (X) which I praised when it came to the London Film Festival last year, has now arrived at the Rialto.