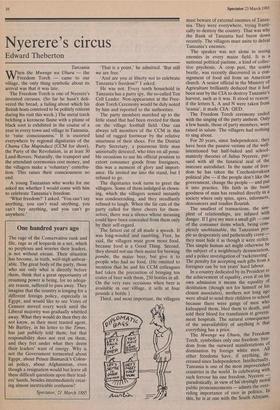 Tanzania When the Mwenge wa Uhuru — the Freedom Torch — came to our village, the only thing symbolic about its arrival was that it was late.

The Freedom Torch is one of Nyerere's invented circuses. (So far he hasn't deli- vered the bread, a failing about which his British hosts contrived to be politely reticent during his visit this week.) The metal torch belching a kerosene flame with a plume of black soot is exhibited in the course of a year in every town and village in Tanzania, to 'raise consciousness.' It is escorted everywhere by regional dignitaries of the Chama Cha Mapinduzi (CCM for short), the Party of the Revolution, in at least 30 Land-Rovers. Naturally, the transport and the attendant ceremonies cost money, and the villagers make a 'voluntary' contribu- tion. This raises their consciousness no end.

A young Tanzanian who works for me asked me whether I would come with him to celebrate Tanzania's freedom.

`And are you at liberty not to celebrate Tanzania's freedom?' I asked.

He was not. Every tenth household in Tanzania has a party spy, the so-called Ten Cell Leader. Non-appearance at the Free- dom Torch Ceremony would be duly noted by him and reported to the authorities.

The party members marched up to the little stand that had been erected for them on the village football field. One can always tell members of the CCM in this land of ragged footwear by the relative smartness of their shoes. For the District Party Secretary, a poisonous little man universally detested, who tries on all possi- ble occasions to use his official position to extort consumer goods from foreigners, this was a moment of glory and import- ance. He invited me into the stand, but I refused to go.

The dignitaries took turns to greet the villagers. Some of them indulged in clown- ing, which the villagers sensed instantly was condescending, and they steadfastly refused to laugh. When the fat cats of the party called for three cheers for them- selves, there was a silence whose meaning could have been concealed from them only by their self-regard.

The fattest cat of all made a speech. It was long-winded and rambling. First, he said, the villagers must grow more food, because food is a Good Thing. Second, they should not use their maize for brewing pombe, the maize beer, but give it to people who had no food. (He omitted to mention that he and his CCM colleagues had taken the precaution of bringing ten crates of beer with them, 250 bottles in all. On the very rare occasions when beer is available in our village, it sells at four pounds a bottle.)

Third, and most important, the villagers must beware of external enemies of Tanza- nia. They were everywhere, trying franti- cally to destroy the country. That was why the Bank of Tanzania had burnt down recently. The villagers must unite to defeat Tanzania's enemies.

The speaker was not alone in seeing enemies in every maize field. It is a national political pastime, a kind of collec- tive psychosis. A crop pest, the scania beetle, was recently discovered in a con- signment of food aid from an American church. A senior official in the Ministry of Agriculture brilliantly deduced that it had been sent by the CIA to destroy Tanzania's harvest, such as it was. It stood to reason: if the letters S, A and N were taken from `scania', it made CIA: QED.

The Freedom Torch ceremony ended with the singing of the party anthem. Only a few hands, those of party members, were raised in salute. The villagers had nothing to sing about.

For 20 years, since Independence, they have been the passive victims of the well- intentioned but half-baked and school- masterly theories of Julius Nyerere, pur- sued with all the fanatical zeal of the insecure autodidact. In the name of free- dom he has taken the Czechoslovakian political jibe — if the people don't like the government, change the people — and put it into practice. His faith in the basic goodness of man has resulted directly in a society where only spies, spivs, informers, denouncers and toadies flourish.

The smallest of transactions, the sim- plest of relationships, are infused with danger. If I give my men a small gift — one of the consumer items which, being com- pletely unobtainable, the Tanzanian peo- ple so desperately and pathetically crave they must hide it as though it were stolen. This simple human act might otherwise be the subject of a neighbourly denunciation, and a police investigation of 'racketeering The penalty for accepting such gifts from a foreigner can be ten years' hard labour. In a country dedicated by its President to the achievement of equality, even if on his own admission it means the equality of destitution (though not for himself or his closest associates), mothers not long ago were afraid to send their children to school because there were gangs of men who kidnapped them, bled them to death, and sold their blood for transfusion at govern- ment hospitals. The natural consequence of the unavailability of anything is that everything has a price. The Mwenge wa Uhuru, the Freedom Torch, symbolises only one freedom: free- dom from the outward manifestations of domination by foreign white men. All other freedoms have, if anything, de- creased since Independence. Intellectually, Tanzania is one of the most impoverished countries in the world. In celebrating with such fervour his one freedom, Nyerere paradoxically, in view of his cloyingly moral public pronouncements — admits the over- riding importance of race in politics. In this, he is at one with the South Africans.