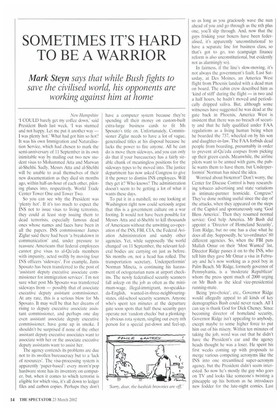 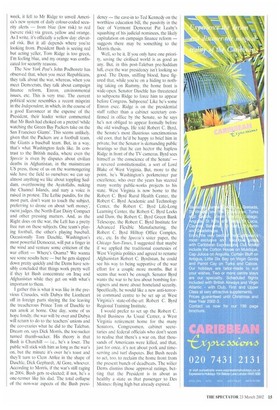 SOMETIMES IT'S HARD TO BE A WARRIOR

Mark Steyn says that while Bush fights to

save the civilised world, his opponents are working against him at home

New Hampshire 'I COULD barely get my coffee down,' said President Bush last week. 'I was stunned and not happy. Let me put it another way I was plenty hot.' What had got him so hot? It was his own Immigration and Naturalisation Service, which had chosen to mark the semi-anniversary of 11 September in its own inimitable way by mailing out two new student visas to Mohammed Atta and Marwan al-Shehhi. Sadly. Messrs Atta and al-Shehhi will be unable to avail themselves of their new documentation as they died six months ago, within half-an-hour of each other, piloting planes into, respectively. World Trade Center Tower One and Tower Two.

The agency contends its problems are due not to its swollen bureaucracy but to a 'lack of resources'. The visa-processing system is apparently 'paper-based': every mom'n'pop hardware store has its inventory on computer, but, when it comes to which terrorist is eligible for which visa, it's all down to ledger files and carbon copies. Perhaps they don't have a computer system because they're spending all their money on custom-built extra-large business cards to fit Ms Sposato's title on. Unfortunately, Commissioner Ziglar needs to have a lot of vague, generalised titles at his disposal because he lacks the power to fire anyone. All he can do is move them sideways, and you can only do that if your bureaucracy has a fairly sizable chunk of meaningless positions for the sideways types to be moved into. The justice department has now asked Congress to give it the power to dismiss INS employees. Will they get it? Who knows? The administration doesn't seem to be getting a lot of what it wants these days.

To put it in a nutshell, no one looking at Washington right now could seriously argue that this is a government culture on a war footing. It would not have been possible for Messrs Atta and al-Shehhi to kill thousands of Americans without the unwitting co-operation of the INS, FBI, CIA, the Federal Aviation Administration and sundry other agencies. Yet, while supposedly 'the world changed' on 11 September, the relevant federal bodies are carrying on just as before. Six months on, not a head has rolled. The transportation secretary, Underperformin' Norman Mineta, is continuing his harassment of octogenarian nuns at airport checkins. The newly federalised security scanners fall asleep on the job as often as the minimum-wage, illegal-immigrant, no-speakkada-English, wanted-in-three-neighbouringstates, old-school security scanners. Anyone who's spent ten minutes at the departure gate soon spots that half these security guys operate not 'random checks' but a plonkingly obvious rota system, singling out every nth person for a special pat-down and feel-up, so as long as you graciously wave the nun ahead of you and go through as the nth plus one, you'll slip through. And, now that the guys frisking your boxers have been federalised, it's apparently 'unconstitutional' to have a separate line for business class, so that's got to go, too (campaign finance reform is also unconstitutional, but evidently not as alarmingly so).

In fairness, if the line's slow-moving, it's not always the government's fault, Last Saturday, at Des Moines, an America West flight from Phoenix landed with a dead man on board. The cabin crew described him as 'kind of stiff during the flight — in two and a half hours, he hadn't moved and periodically dripped saliva. But, although some witnesses have suggested he was dead at the gate back in Phoenix, America West is insistent that there was no breach of security and that he fully qualified under FAA regulations as a living human being when he boarded the 737, wheeled on by his son and daughter-in-law. The FAA forbids dead people from boarding, presumably in order to prevent al-Qa-eda corpses from picking up their green cards. Meanwhile, the airline pilots want to be armed with guns, the public wants them to have them, but Underperformin' Norman has nixed the idea.

Worried about bioterror? Don't worry. the Center for Disease Control is busy researching tobacco advertising and state variations in intimate-partner homicide. Congress? They've done nothing useful since the day of the attacks, when they appeared on the steps of the Capitol and spontaneously sang `God Bless America'. Then they resumed normal service: God help America. Mr Bush did appoint a 'Director of Homeland Security', Tom Ridge, but no one has a clue what he does all day. Supposedly, he 'co-ordinates' 80 different agencies. So, when the FBI puts Mullah Omar on their 'Most Wanted' list, Director Ridge passes it on to the INS, who tell him they gave Mr Omar a visa in February and he's now working as a pool boy in Palm Beach. Mr Ridge, formerly governor of Pennsylvania, is a 'moderate Republican' whom the press spent much of 2000 urging on Mr Bush as the ideal vice-presidential running-mate.

Being 'pro-choice', etc., Governor Ridge would allegedly appeal to all kinds of key demographics Bush could never reach. All I can say is thank God for Dick Cheney. Since becoming director of homeland security, Governor Ridge isn't appealing to anybody, except maybe to some higher force to put him out of his misery. Within ten minutes of taking the job, word was out that he didn't have the President's ear and the agency heads thought he was a loser. He spent his first weeks coming up with proposals to merge various competing acronyms like the INS into one streamlined super-acronym agency, but the President didn't seem interested. So now he's mostly the guy who goes on TV and looks like someone's twisting a pineapple up his bottom as he introduces new fodder for the late-night comics. Last week. it fell to Mr Ridge to unveil America's new system of daily colour-coded security alerts — from blue (low risk) to red (severe risk) via green, yellow and orange. As I write, it's officially a yellow day: elevated risk. But it all depends where you're looking from. President Bush is seeing red but acting yeller, Tom Ridge is too green, I'm feeling blue, and my orange was confiscated for security reasons.

The New York Post's John Podhoretz has observed that, when you meet Republicans, they talk about the war, whereas, when you meet Democrats, they talk about campaign finance reform, Enron. environmental issues, etc. This is VerY true. The current political scene resembles a recent misprint in the Independent, in which, in the course of a good Eurosneer at the expense of the President, their leader writer commented that Mr Bush had choked on a pretzel 'while watching the Green Bay Packers take on the San Francisco Giants'. This seems unlikely, given that the Packers are a football team, the Giants a baseball team. But, in a way, that's what Washington feels like. In contrast to the British media, where even the Speccie is riven by disputes about civilian deaths in Afghanistan, in the mainstream US press, those of us on the warmongering side have the field to ourselves: we can say almost anything we like about toppling Saddam, overthrowing the Ayatollahs, nuking the Channel Islands, and nary a voice is raised in protest. The Leftie pundits, for the most part, don't want to touch the subject, preferring to drone on about 'soft money', racist judges. the North-East Dairy Compact and other pressing matters. And, as the Right does on the war, the Left has a pretty free run on these subjects. One team's playing football, the other's playing baseball. Occasionally Tom Daschle, Washington's most powerful Democrat, will put a finger in the wind and venture some criticism of the war effort — Where's Osama? We wanna see some results here — but he gets slapped down pretty quickly and the Dems have sensibly concluded that things work pretty well if they let Bush concentrate on Iraq and Afghanistan while they get on with what's important to them.

I gather this is what it was like in the previous Crusades, with Dubya the Lionheart off in foreign parts slaying the foe leaving the treacherous Prince Tom of Daschle to run amok at home. One day, some of us hope fondly, the war will be over and Dubya will return to do to the teachers' unions and the eco-crazies what he did to the Taleban. Dream on. says Dick Morris, the toe-sucker turned thumb-sucker. His theory is that Bush is Churchill — i.e., he's a loser. The public will stick with him as long as the war's on, but the minute it's over he's toast and they'll turn to Clem Attlee in the shape of Daschle, Dick Gephardt, Al Gore, whoever. According to Morris, if the war's still raging in 2004. Bush gets re-elected; if not, he's a one-termer like his dad. The total collapse of the non-war aspects of the Bush presi

dency — the cave-in to Ted Kennedy on the worthless education bill, the passivity in the face of Vermont Democrat Pat Leahy's squashing of his judicial nominees, the likely capitulation on campaign finance reform — suggests there may be something to the Morris thesis.

Well, so be it. If you only have one priority, saving the civilised world is as good as any. But, in this post-Taleban pre-Saddam lull, even the war presidency isn't looking so good. The Dems, sniffing blood, have figured that, while you're on a hiding to nothing taking on Rummy, the home front is wide-open. Senator Daschle has threatened to subpoena Ridge to force him to appear before Congress. Subpoena! Like he's some Enron exec. Ridge is on the presidential staff rather than a cabinet secretary confirmed in office by the Senate, so he says he's not obliged to appear formally before the old windbags. He told Robert C. Byrd, the Senate's most illustrious sanctimonious old coot. that he'd be happy to brief him in private, but the Senator is demanding public hearings so that he can hector the hapless Ridge in front of the TV cameras. Byrd sees himself as 'the conscience of the Senate' — a revered constitutionalist, a sort of Lord Blake of West Virginia. But, more to the point, he's Washington's porkmeister par excellence, who over the years has steered many worthy public-works projects to his state. West Virginia is now home to the Robert C. Byrd Rural Health Center, the Robert C. Byrd Academic and Technology Center, the Robert C. Byrd Life-Long Learning Center, the Robert C. Byrd Locks and Dam, the Robert C. Byrd Green Bank Telescope, the Robert C. Byrd Institute for Advanced flexible Manufacturing, the Robert C. Byrd Hilltop Office Complex, etc., etc. In the Speccie's sister paper, the Chicago Sun-Times, I suggested that maybe if we applied the traditional courtesies of West Virginia politics and agreed to rename Afghanistan Robert C. Byrdistan, he could see his way to being supportive of the war effort for a couple more months. But it seems that won't be enough. Senator Byrd wants the war to be less about bombing foreigners and more about homeland security. Specifically, he would like a new anti-terrorist command centre to be set up at West Virginia's state-of-the-art Robert C. Byrd Regional Training Institute.

I would prefer to set up the Robert C. Byrd Business As Usual Center, a West Virginia retirement home for the many Senators, Congressmen, cabinet secretaries and federal officials who don't seem to realise that there's a war on. that thousands of Americans were killed, and that, just for once. it's not about pork and timeserving and turf disputes. But Bush needs to act, too, to reclaim the home front from the present bunch of deadbeats. The wilier Dems dismiss those approval ratings, betting that the President is in about as healthy a state as that passenger to Des Moines: flying high but already expired.