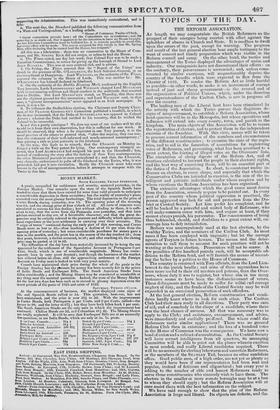 &panic, unequalled for suddenness and severity, occurred yesterday, in the Foreign Market. Our remarks upon the state of the Spanish Bonds have tended to show that there have existed for some time valid grounds to anticipate a considerable depression in those securities; but the reality of yesterday's panic exceeded even the most gloomy forebodings. The total depression in the price of Cortes Bonds during yesterday, was 13. The opening price of the morning was 64, and ihe closing price at four o'clock 51 52. All sorts of rumours were circulated as reasons for this decline ; but without alluding to them, it is suffi- cient to say, that the news from the Peninsula was yesterday, and that later °deices received today are of a favourable Character and that the great de- pression may be entirely referred to the pressure and difficulty which speculators must experience at the next settlement in carrying over their accounts. The " reign of terror" continued during the early part of this morning, and Cortes Bonds were as low as 49,—thus marking a decline of 15 per cent. from the opening price of yesterday ; but some considerable purchases for money gave a tone to the market, and the price has in the course of the day reached 55 ; from that point, however, a decline occurred, to 50; and after reaching 53, the closing pie: may be quoted at 51 to 52. The difficulties of the day have been materially increased by its being the one appointed for the settlement of the Speculative Account in Portuguese :3 per Cent. Stock, which is one of considerable magnitude. Money has come- quently been in very great demand ; and though the heaviness of the market was relieved before its close, still the approaching settlement of the Foreign Account on Friday next is looked to with very great anxiety.

Consols have maintained their price during the whole of the panic in the Foreign Stocks; but the pressure for money has been severely felt in the prices of India Bonds and Exchequer Bills. The South American Stocks have fallen considerably ; and the Mining Shares may be considered as unsaleable at any thing near the nominal quotation. Indeed, the state of the Money Market for the last two days has been such as to exceed in gloomy depression even the worst periods of the panic of 1625 and crisis of 1822.

At the commencement of business, the market displayed, some signs of life, and Spanish Bonds rallied to 54. This quotation, however, has not been maintained, and the price is now 51i to 52. With the improvement in Cortes Bonds, both Portuguese 5 per Cents. and 3 per Cents. rallied—the former to 98, and the latter to 67!,; but they have both fallen back 1 per cent. The South American Stocks are the only ones in which the improvement has continued. Chilian Bonds are 52, and Columbian 41i 42. The Alining Shares are totally neglected. It will be seen that Exchequer Bills are at an unusually 1ov/quotation, as are India Bonds, which are only at 5s. 7s. prem.