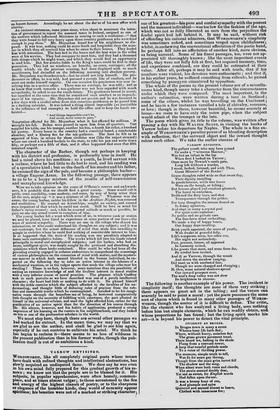 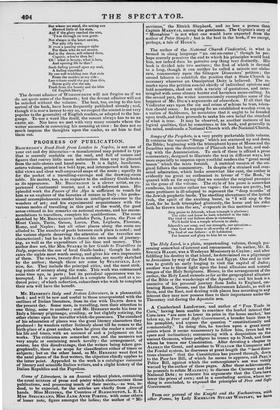 WORDSWORTH, like all completely original poets whose muses have dealt with refined thoughts and intellectual abstractions, has slowly acquired an undisputed fame. We dare say he was even in his own mind fully prepared for this gradual growth of his re- nown ; we know not that the people are to be blamed for it. His subjects, in popular apprehension, were often homely, common- place, and at times almost vulgar; to those accustomed to the fire and energy of the highest classes of poetry, or to the sharpness or elegance of the humbler kinds, they would of necessity appear spiritless; his beauties were not of a marked or striking character; one of his greatest—his pure and cordial sympathy with the poorest and the meanest individual—was too low for the fashion of the age, which was not so fully liberated as ours from the prejudices the feudal spirit hsel left behind it. It may be said, without risk of offending his rational admirers, that WORDSWORTH 'S simplicity was sometimes naked, and sometimes verged upon childishness; whilst, in eschewing the conventional affectation of the poetic band, he perhaps fell into an affectation of another kind, more obvious, as being unusual. Some of his finest passages, too, were not ap- preciated till thoroughly known; like the most important events of life, they were not fully felt at first, but required memory-, time, and experience combined, ere they could be estimated at their value. After all, perhaps it may be said with truth, that if his assailers were violent, his devotees were enthusiastic ; and that if, in his earlier years, he suffered something from ridicule, he gained something by panegyric stimulated by opposition.

The whole of the poems in the present volume are of a miscella- neous kind, though many take a character from the circumstances under which they were composed. The most important, in the author's estimation, were written during a tour in Scotland ; some of the others, whilst he was travelling on the Continent ; and he basin a few instances versified a tale of chivalry, romance, or love; though in these, however beautiful, he seems scarcely at home—we seem to have only the oaten pipe, when the subject would admit of the trumpet or the lute.

The poem which gives its title to the volume, was written after passing a day with Sir WALTER Scorr, in visiting the banks of Yarrow before his departure for Naples. The whole is a fine ex- ample of W ORDSWORTH'S peculiar power of so blending description with reflection, that the outward object and the inward thought. colour each other. We take the earlier stanzas of

The gallant youth who may have gained Or seeks a " winsome Marrow," Was but an infant in the lap When first I looked on Yarrow; Once more by Newark's castle gate, Long left without a warder, I stood, looked, listened, and with Thee, Great Minstrel of the Border !

Grave thoughts ruled wide on that sweet day, Their dignity installing In gentle bosoms, while sere leaves Were on the bough, or filling; But breezes played and sunshine gleamed, The forest to embolden, Reddened the fiery hues, and shot Transparence through the golden.

For busy thoughts the stream flowed on In foamy agitation, And slept iu ninny a crystal pool For quiet contemplation : No public and no private care The free-born mind enthralling, We made a day of happy hours, Our happy days recalling.

Brisk youth appeared, the morn of youth, With freaks of graceful folly, Life's temperate noon, her sober eve, Her night not melancholy. Past, present, future, all appeared

Like guests that meet, and some from far, By cordial love invited.

And if. as Yarrow, through the woods And down the meadow ranging, Did meet us with unaltered face, Though we were changed and changing ; If, then, some natural shadows spread Our inward prospect over, The soul's deep valley was not slow Its brightness to recover.

The following is another example of his power. The incident is. simplicity itself; the thoughts are none of them very striking ; there appears no great art in the telling ; and the verses can scarcely be said to point a moral : yet the poem possesses the same sort of charm which is found in many other passages of W ORDS. WORTH, though the source of it is difficult to define. The critic,. like the chemist who has analyzed a living body, sees nothing before him but simple elements, which he can readily obtain, and. whose proportions he has found; but the living spirit mocks his• art—it is beyond his power to detect the vital principle.

In Bruges town is many a street Whence busy life hath fled; Where, without hurry, noiseless feet The grass-grown pavement tread. There heard we, halting in the shade Flung from a convent-tower, A harp that tuneful prelude made To a voice of thrilling power. The measure, simple truth to tell, Was fit for some gay throng, Though from the same grim turret fell The shadow and the song. When silent were both voice and chords, The strain seemed doubly dear, Yet sad as sweet, for English words Had fallen upon the ear. It was a breezy hour of eve, And pinnacle and spire Quivered and seemed almost to heave, Clothed with innocuous fire; But where we stood, the setting sun Showed little of his state, And if the glory reached the nun, 'Twos through an iron grate. Not always is the heart unwise, Nor pity idly born,

If even a passing stranger sighs

For them who do not mourn. Sad is thy doom, self-solaced dove, captive, whoe'er thou be!

Oh! what is beauty, what is lave,

And opening life to thee?

Such feeling pressed upon my soul, A feeling sanctified By one soft trickling tear that stole From the maiden at my side : Less tribute could she pay than this,

Fresh from the beauty and the bliss Of English liberty?

The devout admirer of WORDSWORTH will not forgive us if we slo not quote some of the Sonnets ; but the devout admirer will not be satisfied without the volume. The best, too, owing to the late arrival of the book, have been frequently published already; and, though it is now a heresy to say so, we suspect the sonnet is not very popular to the generality of English readers, or adapted to the lan- guage. To use a word like itself, the sonnet always has to us an exotic, air. Nor have we met with very many sonnets where the writer succeeds in conveying his meaning at once : he does not so much impress the thoughts upon the reader, as set him to find them out.