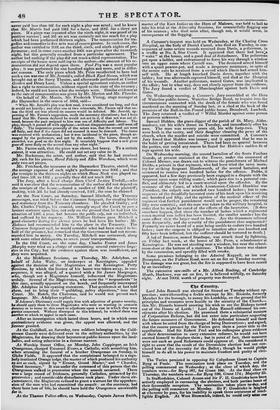 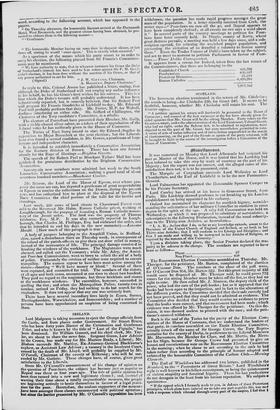 Lord John Russell was elected for Stroud on Tuesday without op- position; notwithstanding a feeble attempt by Mr. Ricardo, formerly Member for the borough, to annoy his Lordship, on the ground that his principles and measures were hostile to the security of the Church,— this Mr. Ricardo himself avowing his wish to see the Bishops turned out of the House of Lords ! Lord John Russell addressed his con- stituents after his election. lie promised them a substantial measure of Corporation Reform, but did not enter into particulars respecting the future measures of Government. He defended himself and those with whom he acted from the charge of being Destructives ; and argued, that the course pursued by the Tories gave them a juster title to the appellation. Had Sir Robert Peel and his colleagues given evidence of their determination to carry extensive reforms, he would not have exerted himself to displace them ; but in point of fact, their measures were not such as good Reformers could approve of. He considered it right to avow that the result of the Devonshire election had not con- vinced him of the necessity for the Ballot ; though be wouldpledge himself to do all in his power to maintain freedom and purity of elec- tion.

In Staffordshire, Colonel Anson and Sir F. H. Goodricke have been actively employed in canvassing the electors, and both parties boast of their favourable reception. The nomination takes place to-day, and the polling will commence on Monday. Sir F. Goodricke is laughed at wherever he goes, for his inability to speak three sentences of inter- ligible English. At West Bromwich, indeed, be could only intact ors

word, according to the following account, which has appeared in the papers.

" On Thursday afternoon, the honourable Baronet arrived at the Dartmouth Hotel, West Bromwich, and the greatest silence having been obtained, he pro- ceeded to address them in the following manner-

" The honourable Member having sat some time in eloquent silence, at last drove off, stating he would ' come again.' This is exactly what occurred."

As a specimen of the means which his party resort to in order to tarry his election, the following placard from Sir Francis's Committee- room may be mentioned.

" We have authority to state, that in whatever instances his Grace the Duke -of Sutherland's interest has been used to bias voters against Sir F. II. Goel- ricke's election, it has been done without the sanction of his Grace, or that of any person authorized to act for him. (Signed) "J. W. G1FFARD Chairman.

In reply to this, Colonel Anson has published a letter, stating, that

although the Duke of Sutherland will not employ any undue influence in his behalf, he has his Grace's best wishes for his success. This is a hint which the Duke's tenants will probably understand. It has been industriously reported, but is scarcely believed, that Sir Robert Peel will propose Sir Francis Goodrieke at Lichfield to-day ; Mr. Edmund Peel will probably perform that duty. Mr. Foster, M. P. for Walsall, declines interfering on either side. Mr. Giffard of Chillington, the Chairman of the Tory candidate's Committee, is a atholic.

The electors of Pontefract have presented their Member, Mr. Gully, with a richly-chased silver salver, as a token of their approbation of the Liberal votes he has uniformly given in the House of Commons.

The Tories of East Surry intend to start Sir Edward .Sugden in opposition to Major Beauclerk at the next election ; but the Liberals have also found a second candidate, in Mr. Gower, a gentleman of large fortune and independent character.