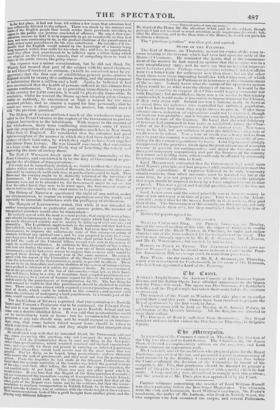 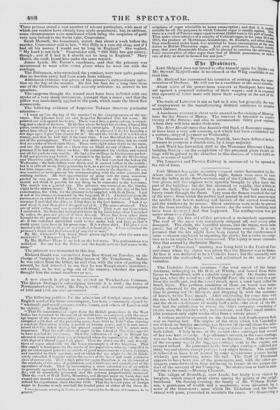 Page 7, 23 May 1840 — Further evidence concerning the murder of' Lord William Russell was
Close

Further evidence concerning the murder of' Lord William Russell was

given yesterday before the Bow Street Magistrates. The witnesses were the cook and housemaid, Lord William's coachmen, Mr. Pector's coachman, the butler of Mr. Latham, who lived in Nerielk Street, the two surgeons who had examined the corpse, and several Policemen.

These persons stated a vast number of minute particulars, with most of which our readers have already been made acquainted ; but, in addition, some circumstances were mentioned which bring the suspicion of guilt very near indeed to the Swiss valet, Courvoisier. Sarah Mansell, the housemaid, stated, that about a week before the murder, Courvoisier said to her, " Old Billy is a rum old chap, and if I had all his money I would not be long in England." She replied, "My Lord is not rich." Courvoisier said, " Old Billy has got money, though ; and if I had it I should not be long in England." Mary Haste!, the cook, heard hint make the same remark.

James Leich, Mr. Fector's coachman, said that the prisoner was accustomed to wear white cotton ;Ayes when he went out with the carriage.

The Policemen, who examined the premises, were now quite positive that no forcible entry had been made from without.

Additional evidence was given of the prisoner's extraordinary agita- tion on the day of the murder. Ile hid his face for a long time front one of the Policemen, and could scarcely articulate an answer to his questions.

The surgeons thought the wound must have been inflicted with one stroke of a very sharp instrument, stronger than a razor ; and that the pillow was immediately applied to the gash, which made the blood flow downwards.

The following evidence of Inspector Tedman deserves particular attention- " I went up [on the day of the murder] to the sleeping-rooms of the ser- vants. The prisoner took me and Inspector Berestbril into his room. Ile pointed out and opened his boxes. There was a box, a portmanteau, a carpet- bag, and a chest of drawers. In his box where he kept his clothes, I found this purse, containing a five-pound note and six sovereigns. I showed it him, and asked him where he got the note ? 1! nid, I changed it fia. his Lordship a few days ago; I gave him thange for it.' lie said the whole of it was his own money, and that he had had it fur sonic time. I saw Beresford take a chisel out of the portmanteau. There were two shirts examined then, but we could fiud no marks of blood upon them. There were eight other shirts in the room, and one the prisoner had on : there was no blood on any of them. I asked prisoner if be had any thing on hint, lie unbuttoned his clothes, and turned out all his pockets very rein:ily. Ile had a few shillings in his trousers-pocket : I did not perceive any locket. I remained in the house. On the 1Vednesday and Thursday night, the pr/sonic shpt alone. c had searched the bed on the Wednesday : the bed-clothes were down, and it seemed hollow in the middle; but it is difficult to say ifan■,' person lay in it, as a person lying in it would make but little impression. He laid (teem to those rooms in the dog-time. Ile was was watched so as to prevent his communicating with the other servants, but nothing further. lie had opportunities of going into the room 7111aCCOM- panied ty any person. Ile had a clean shirt on on the Wednesday. I should not think it possible for any thing to be concealed in the toad-room. The search was a t;eneral one. The prisoner was removed on the Sunday night to the station-house. 'rinse was au application ott the day of the last examination, the 13th, for the prisoner to be supplied with fresh linen. I got it out of his wont, accompanied by the Sergeant, D 13. Milked out from the pormantcon in whi,h 1 bad Sten Ilo/SC shirts, the linen Mot he desira • On that occasion I mill:Wed the shirt, as I had done in the first instance. I took it up and shack it, owl these ylor,s dropiwd out if it. [The gloves produced. nap are of white mum', and e suited with blood.] They were not there when I searched it. SN o linen hat: heen placed there to my knowledge alter I searched it, unless the pris-tur plo,(,/ a Mr re There has been other linen brought for the prisoner since he was ttsken away, is hieli I have taken charge of: it has P:111■1111ell untouched until to-day under lock and key, so that it could never have been its his possession. It is a clean shirt. The tgort s were marked with blood, te.i limy ore ume—the h.i't-hund glore. / Aare examined the prisoner's hood, and fl, ml so tiny etz1 Or By Mr. llowcr—" You fowl(' those gloves eight days after the num was searched ? " Witness-- Yes, Sir."

By Mr. lIall—" There is no lock on the bed-room. The portmanteau was unlocked. .No one Lit the Police and the finale servants had access to the room."

The prisoner was remanded to this day.

Richard Gould was committed front Bow Street on Tuesday, on the charge of burglary its the dwelling-house of Mr. Templeman. Before he was taken front the Office, lie saki that, with the view of getting the reward, he had intended to say that he was Templeman's murderer ; not caring, as lie was going out of the country, whether the public thought him the actual murderer or not.