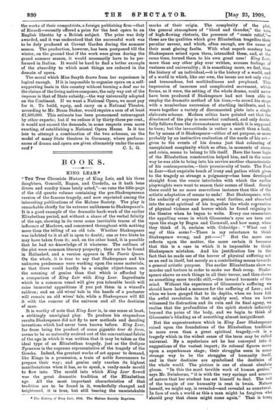 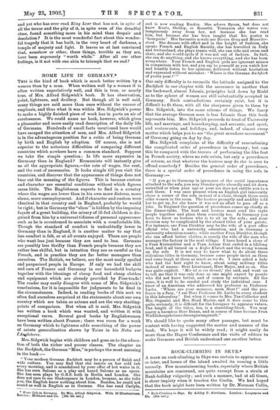 "THE True Chronicle History of King Leir, and his three daughters, Gonorill, Ragan, and Cordella, as it bath bone divers and sundry times lately acted,"—so runs the title-page of the old quarto volume containing the pre-Shakespearean version of the famous tragedy, and now reprinted among the interesting publications of the Malone Society. The play is remarkable chiefly for its extreme unlikeness to Shakespeare's. It is a good example of the dramatic hack-work of the earlier Elizabethan period, not without a share of the verbal felicity of the age, showing in its verse some inevitable traces of the influence of Marlowe, and concerned throughout with nothing more than the telling of an old tale. Whether Shakespeare was indebted to it at all is open to doubt; one or two hints he may have taken from it; and, on the other hand, it is possible that be had no •knowledge of it whatever. The outlines of the plot were common literary property; they are to be found in Holinshed, and a version appears in The Faerie Queen. On the whole, it is true to say that Shakespeare and his unknown predecessor were working upon the same materials, so that there could hardly be a simpler object-lesson on the meaning of genius than that which is afforded by a comparison of King Leir with King Lear. Ingredients which in a common vessel will give you tolerable broth will raise immortal apparitions if you put them in a wizard's caldron; and an old wives' tale in the hands of a poetaster will remain an old wives' tale, while a Shakespeare will fill it with the rumour of the universe and all the destinies of man.

It is worthy of note that King Lear is, in one sense at least, a strikingly unoriginal play. To produce his stupendous results Shakespeare did not fly to new methods and dazzling inventions which had never been known before. King Lear, far from being the product of some gigantic tour de force, seems to be so naturally evolved out of the conventional fabric of the age in which it was written that it may be taken as the ideal type of an Elizabethan tragedy, just as the Oedipus Tyrannus is the supreme representative of the tragedy of the Greeks. Indeed, the greatest works of art appear to demand, like Kings in a procession, a train of noble forerunners to prepare their way; and genius only reaches its highest manifestations when it has, so to speak, a ready-made mould to flow into. The mould into which King Lear flowed was the great dramatic tradition of the Elizabethan age. All the most important characteristics of that tradition are to be found in it, wonderfully changed and heightened, it is true, but still bearing the unmistakable • Ths History of King Leir, 1005. The Malone Society Reprints marks of their origin. The complexity of the plot, the general atmosphere of "blood and thunder," the vein of high-flowing rhetoric, the presence of "comic relief,"-.. these are•the qualities which give Elizabethan tragedies their peculiar savour, and which, often enough, are the cause of their most glaring faults. With what superb mastery has Shakespeare seized upon them, intensified them, and, at the same time, turned them to his own great uses ! King Lear, more than any other play ever written, arouses feelings of vastness and universality ; it is something more, we feel, than the history of an individual,—it is the history of a world, and of a world in which, like our own, the issues are not only vital and tremendous, but multitudinous and perplexed. This impression of immense and complicated movement, which forms, as it were, the setting of the whole drama, could never have been produced if Shakespeare had not been able to employ the dramatic method of his time,—to crowd bis stage with a numberless succession of startling incidents, and to weave together a variety of disconnected plots into a single elaborate scheme. Modern critics have pointed out that the dgnatiment of the play is somewhat confused, and only doubt- fully follows from the circumstances upon which it is supposed to turn; but the inexactitude is rather a merit than a fault, for by means of it Shakespeare—either of set purpose, or more probably by an instinctive realisation of the needs of his art— gives to the events of his drama just that colouring of unexplained complexity which so often, in moments of stress and crisis, seems to belong to life itself. Here the loose logic of the Elizabethan construction helped him, and in the same way he was able to bring into his service another characteristic of his contemporaries,—their promiscuity of taste. The Fool in Lear—that exquisite touch of irony and pathos which gives to the tragedy so strange a poignancy—has been developed straight from the comic interludes with which the earlier playwrights were wont to season their scenes of blood. Surely there could be no more marvellous instance than this of the artistic adaptation of means to ends! But Shakespeare, with the audacity of supreme genius, went further, and absorbed into the most spiritual of his tragedies the whole convention of physical violence and horror which he found reigning in the theatre when he began to write. Every one remembers the appalling scene in which Gloucester's eyes are torn out upon the stage by Regan and Cornwall, and how many, when they think of it, exclaim with Coleridge : " What can I say of this scene?—There is my reluctance to think Shakespeare wrong, and yet— !" But the more one reflects upon the matter, the more certain it becomes that this is a case in which it is impossible to think Shakespeare mistaken. And his justification lies in the fact that he made use of the horror of physical suffering not as an end in itself, but merely as a contributing means towards a general artistic purpose. The earlier Elizabethans show us murder and torture in order to make our flesh creep. Shake- speare shows us such things in all their terror, and then shows us something more terrific still,—the inward torments of the mind. Without the experience of Gloucester's suffering we should have lacked a measure for the suffering of Lear ; and when we have gauged that to its depths, when we have felt the awful revolution in that mighty soul, when we have witnessed its distraction and its ruin and its final agony, we realise that the profundities of the spirit stretch infinitely beyond the pains of the body, and we begin to think of Gloucester's blinding as of something almost insignificant.

But the superstructure which in King Lear Shakespeare raised upon the foundations of the Elizabethan tradition is more even than a great spiritual tragedy,—it is a tragedy which in the widest sense of the term may be called universal. By a mysterious art he has conveyed into it suggestions of the vastest import; its colossal figures move upon a superhuman stage; their struggles seem in some strange way to be the straggles of humanity itself, and in their destinies are symbolised the destinies of the whole world. The picture is one of almost absolute gloom. "In this the most terrible work of human genius," says Mr. Swinburne, "it is with the very springs and sources of nature that her student has set himself to deal. The veil of the temple of our humanity is rent in twain. Nature herself, we might say, is revealed—and revealed as unnatural. In face of such a world as this a man might be forgiven who should pray that chaos might oome again." That is true; and yet who has ever read King Lear that has not, in spite of all the terror and the pity of it, in spite even of the dreadful close, found something more in his mind than despair and desolation ? It is the most wonderful fact about this wonder- ful tragedy that it has built, in the very heart of darkness, a temple of majesty and light. It leaves us at last convinced that, somehow or other, these things, terrible as they are, have been supremely "worth while." After all our other feelings, is it not with one akin to triumph that we end ?