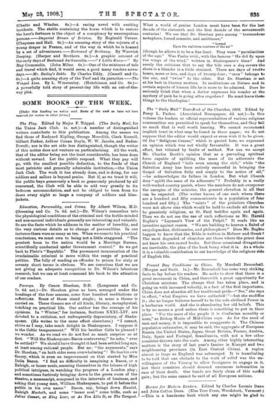 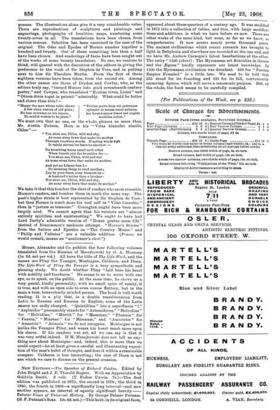 Page 23, 23 May 1908 — possess. The illustrations alone give it a very considerable value.
Close

possess. The illustrations alone give it a very considerable value.

There are reproductions of sculptures and paintings and engravings, photographs of localities, maps, numbering some twenty-seven in all. The translations have been chosen from various sources. Selection has been exercised in the case of the original. The Odes and Epodes of Horace number together a hundred and twenty. Out of these something less than a half have been chosen. And renderings of these have been sought out of the works of some twenty translators. No one, we venture to think, will quarrel with the discretion of the editors in giving the preference to the work of Sir Stephen de Vere, and in putting next to him Sir Theodore Martin. From the first of these eighteen versions have been taken, from the second six. Among the other names are those of Dryden and Cowley, who, as the editors truly say, "turned Horace into good seventeenth-century poetry," and Cowper, who translated " Rectius vives, Licini" and "Otium divos rogat in patenti "admirably. What could be better and closer than this ?—

"Happy the man whose table shows A few clean ounces of old plate ; No fear intrudes on his repose, No sordid wishes to be great."

We must own that no one, on the whole, pleases us more than Mr. Austin Dobson. Here is his " Vitas hinnuleo similis, Chloe" :—

" Yon shun me, Chloe, wild and shy, As some stray fawn that seeks its mother Through trackless woods. If spring winds sigh It vainly strives its fears to smother :— Its trembling knees assail each other

When lizards stir the brambles dry :— You shun me, Chloe, wild and shy

As some stray fawn that seeks its mother.

And yet no Libyan lion I—

No ravening thing to rend another;

Lay by your fears, your tremors by—

A husband's better than a brother : Nor shun me, Chloe, wild and shy, As some stray fawn that seeks its mother."

We take it that this touches the class of readers who most resemble Horace's readers, and touches them in much the same way. The poet's higher strain is best represented by Sir Stephen de Vere ; but then Horace is much more his real self in "Vitas hinnuleo " than in "justum ac tenacem." Conington might have been more largely used. We cannot agree that his versions are "almost entirely spiritless and uninteresting." We ought to have had Lord Derby's admirable version of "Donee gratus eram tibi" instead of Roscommon's mediocre attempt. " Horace's Stories " from the Satires and Epistles on "The Country Mouse" and "Philip and Vulteins " are a valuable addition. (Pracco, we would remark, means an "auctioneer's clerk.")