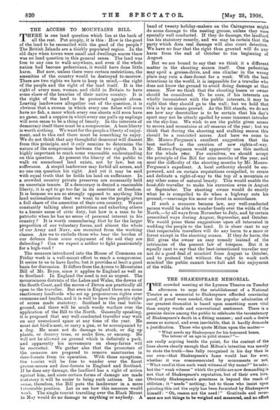 THERE is one land question which lies at the back of all the rest. Put simply, it is this : How is the good of the land to be reconciled with the good of the people ? The British Islands are a thickly populated region. In the old days when towns were small and dwellings scarce there was no land question in this general sense. The land was free to any one to walk anywhere, and even if the whole nation had become pedestrians, it would have done little harm. But now, unless there were certain restrictions, the amenities of the country would be destroyed to-morrow. There are two rights we have to keep in mind,—the right of, the people and the right of the land itself. It is the right of every man, woman, and child in Britain to have some share of the beauties of their native country. It is the right of the land to be protected against abuse. Leaving landowners altogether out of the question, it is obvious that a stream in which every one fishes will soon have no fish, a moor which every one shoots will soon have no game, and a coppice in which every one pulls up saplings will soon cease to be a thing of beauty. In the interests of democracy itself there must be a compromise. A bare liberty is worth nothing. We want for the people a liberty of enjoy- ment, and to this end there must be something to enjoy. We do not think that any thoughtful democrat will dissent from this principle, and it only remains to determine the nature of the compromise between the two rights. It is highly important to reach some reasonable understanding on this question. At present the liberty of the public to walk on unenclosed land exists, not by law, but on sufferance. A stupid landowner may forbid all access, and no one can question his right. And yet it may be said with equal truth that he holds his land on sufferance. In a crowded country private preserves are necessarily held on uncertain tenure. If a democracy is denied a reasonable liberty, it is apt to go too far in its assertion of freedom. It is because we are so strongly opposed to anything like land nationalisation that we want to see the people given a full share of the amenities of their own country. We are constantly talking about patriotism and exhorting others to a keener sense of civic duty, but how is a man to be patriotic when he has no sense of personal interest in his country ? It is worth remembering that by far the larger proportion of our voluntary forces, and almost the whole of our Army and Navy, are recruited from the working classes. Are we to exclude those who bear the burden of our defence from some enjoyment of the soil they are defending ? Can we expect a soldier to fight passionately for a high-road ?

The measure introduced into the House of Commons on Friday week is a well-meant effort to reach a compromise. It seems to us to have faults, but it provides at least a good basis for discussion. It differs from the Access to Mountains Bill of Mr. Bryce, since it applies to England as well as to Scotland. In England the need is not so urgent. The mountainous districts of the Lakes and Wales, the downs of the South Coast, and the moors of Devon are practically all open to the traveller. But even in England there are some reactionary landlords who set up preposterous rights over commons and heaths, and it is well to have the public right of access made statutory. Scotland is the real battle- ground, and there will be much wordy warfare over the application of the Bill to the North. Generally speaking, it is proposed that any well-conducted traveller may walk on any unenclosed space at any time of the year. He must not bird's-nest, or carry a gun, or be accompanied by a dog. He must not do damage to stock, or dig up plants, or destroy trees, or make fires, or encamp. He will not be allowed on ground which is definitely a park, and apparently his movements on sheep-farms will be restricted. We gather also that the promoters of the measure are prepared to remove sanctuaries in deer-forests from its operation. With these exceptions, the tourist will be free to wander over the finest grouse-moors and deer-forests in England and Scotland. if he does any damage, the landlord has a right of action against him, and since certain forms of damage are made statutory it will be easier to bring such actions. In one sense, therefore, the Bill puts the landowner in a more iavourable position. Let us see how this measure would work. The single tourist travelling over the Black Mount in May would do no damage to anything or anybody. A. band of twenty holiday-makers on the Cairngorms might do some damage to the nesting grouse, unless they were specially well conducted. If they do damage, the landlord has his statutory remedy, and we may be certain that the party which does real damage will also court detection. We have no fear that the right thus granted will do any harm from the end of October to the beginning of August.

But we are bound to say that we think it a different matter in the shooting season itself. One pedestrian may spoil a grouse-drive, and one climber in the wrong place may ruin a deer-forest for a week. With the best intentions in the world, it is impossible for a traveller who does not know the ground to avoid doing damage at that season. Mow we think that the shooting lessee or owner should be considered. To be sure, if his interests are wholly inconsistent with the public interests, it may be right thatthey should go to the wall ; but we hold that this is by no means proved. As the Bill stands, we do not see how any deerstalker is to be certain that his day's sport may not be utterly spoiled by some innocent intruder on the sky-line. We wish to see the public given access to moors and mountains at all seasons of the year ; but we think that during the shooting and stalking season this should be a restricted access. And here we come to Mr. Munro-Ferguson's excellent suggestion that the best method is the creation of new rights-of-way. Mr. Munro-Ferguson would apparently use this method for the whole year. For ourselves; we should accept the principle of the Bill for nine months of the year, and meet the difficulty of the shooting months by Mr. Munro- Ferguson's expedient. A local authority should be em- powered, and on certain requisitions compelled, to create and dedicate a right-of-way' to the top of a mountain or any other scene of natural beauty. This would enable the bond fide traveller to make his excursion even in August or September. The shooting owner would do exactly what he is compelled to do when a highway cuts his ground,—rearrange his moor or forest in accordance.

If such a measure became law, any well-conducted person would be able to wander freely over the wilds of the North,—by all ways from November to July, and by certain prescribed ways during August, September, and October. We would press these suggestions upon all interested in wedding the people to the land. It is sheer cant to say that respectable travellers will do any harm to a moor or forest except in the shooting season. If they do harm, the Bill gives the owner an easy remedy instead of the intricacies of the present law of trespass. But it is equally cant to say that the best-intentioned traveller may not do a good deal of mischief from August to October, and to pretend that without the right to work such mischief the public cannot have full and fair enjoyment of the wilds.