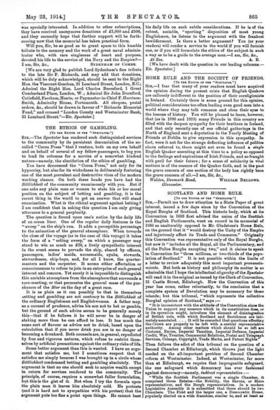 THE ETHICS OF GAMBLING.

[To rex EDITOR or THR Erscraron,.1

Sin,—The Spectator has rendered such distinguished services to the community by its persistent denunciation of the so- called " Cocoa Press " that I venture, both on my own behalf and on behalf of several of my fellow-passengers, to beg yon to lend its columns for a service of a somewhat kindred nature—namely, the elucidation of the ethics of gambling.

You have denounced the " Cocoa Press," not only for its hypocrisy, but also for its wickedness in deliberately fostering one of the most prevalent and destructive vices of the modern working classes. On both these beads you have had the Sittlichkeit of the community unanimously with you. But if one asks any plain man or woman to state his or her moral position on the subject of betting and gambling, it is the rarest thing in the world to get an answer that will stand examination. What is the ethical argument against betting ? I am confident that in asking this question I am only giving utterance to a general perplexity.

The question is forced upon one's notice by the daily life of an ocean liner. One of the regular daily features is the " sweep " on the ship's run. It adds a perceptible percentage to the animation of the general atmosphere. When towards the close of the voyage (as in the case of this voyage) it takes the form of a " selling sweep," on which a passenger may stand to win as much as £36, a lively sympathetic interest in the event seems to pervade the ship, shared by officers, passengers, ladies' maids, nursemaids, ayahs, stewards, stewardesses, ship-boys, and, for all I know, the quarter. masters and the carpenter. It seems either affectation or censoriousness to refuse to join in an enterprise of such general interest and concern. Yet surely it is impossible to distinguish this amiable atmosphere from the atmosphere that surrounds a race-meeting, or that permeates the general mass of the pur- chasers of the Star on the day of a great race.

It is as plain as it can possibly be that in themselves netting and gambling are not contrary to the Sittlichkeit of the ordinary Englishman and Englishwoman. A. father may, as a counsel of prudence, advise his son not to bet or gamble, but the ground of such advice seems to be generally merely this—that if be follows it he will never be in danger of staking more than he can afford to lose. It has much the same sort of flavour as advice not to drink, based upon the calculation that if you never drink you are in no danger of becoming a drunkard. Both counsels are, in general, repudiated by free and vigorous natures, which refuse to restrict them- selves by artificial precautions against the ordinary risks of life.

Some better argument than this is wanted. I have an argu- ment that satisfies me, but I sometimes suspect that it satisfies me simply because I was brought up in a circle whose Sittlichkeit condemned betting and gambling absolutely. The argument is that no one should seek to acquire wealth except in return for services rendered to the community. The principle, of course, requires a somewhat fuller formulation, but this is the gist of it. But when I try the formula upon the plain man it leaves him absolutely cold. He protests (and it is hard not to sympathize with his protest) that the argument puts too fine a point upon things. He cannot base his daily life on such subtle considerations. If he is of the robust, sociable, " sporting " disposition of most young Englishmen, be listens to the argument with the frankest bewilderment. Is there a better argument? You (or your readers) will render a service to the world if you will furnish one, or if you will formulate the ethics of the subject in such a way as to be a guide to the average man.—I am, Sir, &o.,

At Sea. A. B. rWe have dealt with the question in our leading columns.— En. Spectator.]