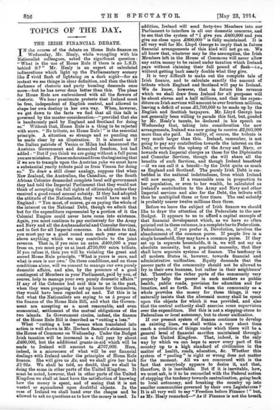 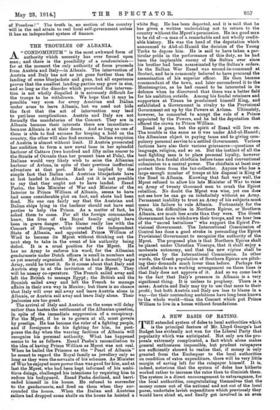 IN the course of the debate on Home Rule finance on Wednesday, Mr. Healy, while wrangling with his Nationalist colleagues, asked the significant question : " What is the use of Horne Rule if there is no L.S.D. behind it ? " Mr. Healy is an expert at calculated indiscretions which light up the Parliamentary scenery like vivid flash of lightning on a dark night—for an instant we see things in clear definition, and then the thick darkness of rhetoric and party humbug descends once more—but he has never done better than this. The pleas for Home Rule are embroidered with all the flowers of rhetoric. We hear passionate protests that Ireland must be free, independent of English control, and allowed to shape her own destiny in her own way. When, however, we get down to the facts we find that all this talk is governed by the master-consideration—" provided that she is handsomely paid by England and Scotland for doing so." Without that, Home Rule is a thing to be rejected with scorn. " No tribute, no Home Rule ! " is the essential principle. A situation so strange and so puzzling can be made clear by an illustration. It is almost as if the Italian patriots of Venice or Milan had denounced the Austrian Government and demanded freedom, but had added : " But if you think we are going without a full purse you are mistaken. Please understand from the beginning that if we are to trample upon the Austrian yoke we must have a substantial yearly tribute paid us from Vienna for doing so." To draw a still closer analogy, suppose that when New Zealand, the Australian, the Canadian, or the South African Colonies demanded complete local self-government they had told the Imperial Parliament that they would not think of accepting the full rights of citizenship unless they received a good round annual subsidy. If they had adopted the attitude of the Nationalists, they would have said to England : " You must, of course, go on paying the whole of the interest on the National Debt, though we admit that but for the expenditure represented by a portion of it the Colonial Empire could never have come into existence. Again, you must continue to pay exclusively for the Army and Navy and all the Ambassadorial and Consular Services, and in fact for all Imperial concerns. In addition to this, you must pay us a good round sum each year over and above anything which we may contribute to the joint revenue. That is, if you raise an extra £400,000 a year from us, you must pay us at least £750,000 extra tribute. If you refuse it, then you will be violating the great and sacred Home Rule principle, 'What is yours is ours, and what is ours is our own.' On these conditions, and on these conditions alone, will we consent to manage our own purely domestic affairs, and also, by the presence of a good contingent of Members in your Parliament, paid by you, of course, help to manage your own purely domestic affairs." If any of the Colonies had said this to us in the past, when they were preparing to set up house for themselves, they would have been regarded as mad. Yet this is in fact what the Nationalists are saying to us d propos of the finance of the Home Rule Bill, and what the Govern- ment are accepting as a most reasonable, and even economical, settlement of the mutual obligations of the two islands. In Government circles, indeed, the finance of the Home Rule Bill is described as "cutting a lose."

What " cutting a loss " means when translated into action is well shown in Mr. Herbert Samuel's statement in the House of Commons on Wednesday. Under the Budget Irish taxation will be increased in a full year by about X400,000, but the additional grants-in-aid which will be made to Ireland will amount to £767,000. Here, indeed, is a microcosm of what will be our financial dealings with Ireland under the principles of Home Rule finance. She will give us Xx, and we shall give her back X1-92z. We shall be told, no doubt, that we shall be doing the same in other parts of the United Kingdom. It must be noted, however, that in other parts of the United Kingdom we shall at least have the satisfaction of knowing how the money is spent, and of seeing that it is not wasted or squandered upon doubtful objects. In the ease of Ireland we shall hand over the cheque and be allowed to ask no questions as to how the money is used. In addition, Ireland will send forty-two Members into our Parliament to interfere in all our domestic concerns, and to see that the system of "1 give you £400,000 and you give me close upon £800,000" is fully maintained. It is all very well for Mr. Lloyd George to imply that in future financial arrangements of this kind will not go on. We all know that, whatever may be the assumption, the Irish Members left in the House of Commons will never allow any extra money to be raised under taxation which Ireland pays without claiming their full pound of flesh—i.e., without getting back nearly double what they give.

It is very difficult to make out the complete tale of Irish finance, and to calculate exactly the amount of tribute which England and Scotland will pay to Ireland. We do know, however, that in future the revenue which we shall draw from Ireland for all purposes will be about eleven and a half millions, and that the expen- diture on Irish services will amount to over fourteen millions, leaving a deficit of some £2,700,000 to be made up by the English and Scottish taxpayers. Mr. Lloyd George has not generally been willing to parade this fact, but, goaded by Mr. Healy's taunts, he declared in his speech on Wednesday that, taking into consideration the new arrangements, Ireland was now going to receive £2,000,000 more than she paid. In reality, of course, the tribute is very much larger than this. Ireland, remember, is not going to pay any contribution towards the interest on the Debt, or towards the upkeep of the Army and Navy, or towards such Imperial charges as those for the Diplomatic and Consular Services, though she will share all the benefits of such Services, and though Ireland benefited —if we can call it a benefit—by the Debt quite as much as England and Scotland. The purely Irish Debt is em- bedded in the national indebtedness, from which Ireland will now escape. If a reasonable sum in proportion to her population, or even to her wealth, be calculated as Ireland's contribution to the Army and Navy and other Imperial services and also for the Debt, the tribute will thus be multiplied three or four times. The real subsidy is probably nearer twelve millions than three.

Before we leave the subject of Irish finance we should like to draw the attention of the Federalists to the new Budget. It appears to us to afford a capital example of that financial development which, as we have so often pointed out in these columns, is a completebar to Federalism. Federalism, or, if you prefer it, Devolution, involves the abandonment of the common purse. If people live in a single household, they may have a common purse. If they set up in separate households, it is, we will not say an absolute necessity, but a practical necessity, that they shall have separate systems of finance. The tendency in all modern States is, however, towards financial and administrative unification. Equity demands that the poorer parts of the community should not be allowed to fry in their own leanness, but rather in their neighbours' fat. Therefore the richer parts of the community very properly help the poorer in such matters as public health, public roads, provision for education and for lunatics, and so forth. But when the community as a whole provides the money for these things, it very naturally insists that the aforesaid money shall be spent upon the objects for which it was provided, and also that the central authority shall exercise some supervision over the expenditure. But this is not a stepping-stone to Federalism or local autonomy, but to closer unification.

If our present system of finance continues to develop on existing lines, we shall within a very short time reach a condition of things under which there will be a general level of financial sacrifice maintained through- out the United Kingdom. That, indeed, is the only way by which we can hope to screw every part of the country up to a high standard of civilization in the matter of health, roads, education, dtc. Whether this system of " pooling " is right or wrong does not matter for the moment. All we are concerned with is the fact that everybody appears to desire it, and that, therefore, it is inevitable. But if it is inevitable, how, we must ask, is it to be reconciled with the Federal notion of stopping the tendency towards centralization, going back to local autonomy, and breaking the country up into smaller communities governed by their own Legislatures ? It is all very well to say " Freedom before Finance ! " but, as Mr. Healy remarked—" As if Finance is not the breath

of Freedom!" The truth is, no section of the country will in the end attain to real local self-government unless it has an independent system of finance.