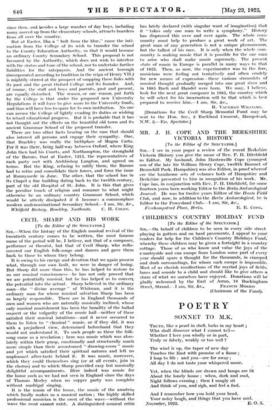 CECIL SHARP AND HIS WORK

[To the Editor of the SPECTATOR.] SIR,—When the history of the English musical revival of the twentieth century comes to be written, the most famous name of the period will be, I believe, not that of a composer, performer or theorist, but that of Cecil Sharp, who redis- covered our English folk-songs and dances and gave them back to those to whom they belong.

It is owing to his energy and devotion that we again possess what, through our own fault, we were in danger of losing. But Sharp did more than this, he has helped to restore to us our musical consciousness—he has not only proved that we are potentially musical, but he has helped us to convert the potential into the actual. Sharp believed in the ordinary man—the " divine average " of Whitman, and it is the ordinary man for whose musical salvation Sharp has been so largely responsible. There are in England thousands of men and women who are naturally musically inclined, whose only musical nourishment has been the banality of the ballad concert or the vulgarity of the music hall—neither of these satisfied their musical intuitions—and it never occurred to them to listen to " classical " music, or if they did, it was with a prejudiced view, determined beforehand that they would not understand it. To such people as these the folk- song came as a revelation ; here was music which was abso- lutely within their grasp, emotionally and structurally much more simple than their accustomed " drawing-room " music and yet which satisfied 'their spiritual natures and left no unpleasant after-taste behind it. It was music, moreover, which they could themselves sing (or at all events, join in the chorus) and to which Sharp provided easy but musically delightful accompaniments. 'Here indeed was music for the home such as we' had not' seen in England since the days

of Thomas Morley when no supper party was complete

It is the music of the home, the music of the amateur which finally makes us a musical nation ; the highly skilled professional musician is the crest of the wave—without the wave the cleat cannot exist. A distinguished •musical has lately declared (with singular want of imagination) that it " takes only one man to write a symphony." History has disproved this over and over again. The whole com- munity . must help to produce a great work of art. The great man of any generation is not a unique phenomenon; but the tallest of his race. It is only when the whole com- munity is making music that it is possible for the one man to arise who shall make music supremely. The present state of music in Europe is parallel in many ways to that of 1625. Then, as now, the experimenter was to the fore, musicians were feeling out tentatively and often crudely for new means of expression—these various streamlets of musical thought gradually merged into one great river and in 1685 Bach and Handel were born. We may, I believe; look for the next great composer in 1985, the country which he will select for his incarnation will be that which is best prepared to receive him.—I am, Sir, &c.,

[Donations for the Cecil Sharp Memorial Fund may be sent to the Hon. Sec., 2 Buekland Crescent, Hampstead, N.W. 3.—En. Spectator.]