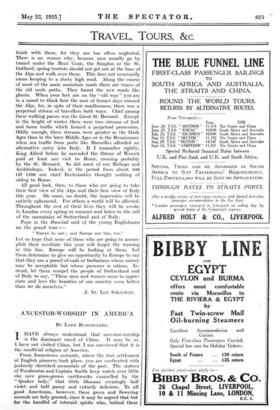 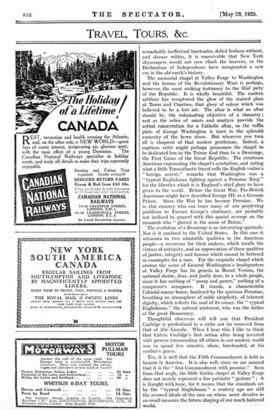 IHAVE always understood that ancestor-worship -I- is the dominant creed of China. It may be so. I.have not visited China, but I am convinced that it is the unofficial religion of America.

-From Jamestown onwards, where the first settlement of English pioneers took place, you are confronted with jealously cherished memorials of the past. The statues of Pocahontas and Captain Smith keep watch over little else save grass-grown earthworks enamelled by the " Quaker lady," that little blossom seemingly half violet and half pansy and entirely delicious. To all good Americans, however, these green and flowering mounds are holy ground, since it may be argued that but for the handful of intrepid spirits who, behind these remarkably ineffectual barricades, defied Indians without, and disease within, it is conceivable that New York skyscrapers would not now climb the heavens, or the Declaration of Independence have inaugurated a new era in the old earth's history.

The memorial chapel at Valley Forge to Washington and the heroes of the Revolutionary Wars is perhaps, however, the most striking testimony to the filial piety of the Republic. It is wholly beautiful. The modern artificer has recaptured the glow of the stained glass at Tours and Chartres, that glory of colour which was believed to be a lost art. The altar is what an altar should be, the culminating objective of a chauntry ; and as the relics of saints and martyrs provide the actual consecration for a Catholic altar, so the coffin plate of George Washington is inset in the splendid austerity of the hewn stone. But wherever you turn all is eloquent of that modest gentleman. Indeed, a captious critic might perhaps pronounce the chapel to be dedicated less to the Triune God than to a Demiurge, the First Cause of the Great Republic. The courteous American expounding the chapel's symbolism, and noting what a little Transatlantic friend calls the English visitor's " foreign accent," remarks that Washington was a " typical Englishman fighting against a Prussian King " for the liberties which it is England's chief glory to have given to the world. Before the Great War, Pro-British Americans might have described George III. as a German Prince. Since the War he has become Prussian. We in this country who can trace many of our perplexing problems to Farmer George's obstinacy, are probably not inclined to quarrel with this quaint revenge on the monarch who " gloried in the name of Briton."

The evolution of a Demiurge is an interesting spectacle. Nor is it confined to the United States. In this case it witnesses to two admirable qualities in the American people—a reverence for their makers, which recalls the virtues of antiquity, and an appreciation of those qualities of justice, integrity and honour which cannot be bettered as ensamples for a race. For the exquisite chapel which crowns the scene of General Washington's headquarters at Valley Forge has its genesis in Mount Vernon, the national shrine, dear, and justly dear, to a whole people, since it has nothing of " pomp and power," nothing of a conqueror's arrogance. It stands, a characteristic Colonial manor house, bordered by the spacious Potomac, breathing an atmosphere of noble simplicity, of inherent dignity, which reflects the soul of its owner, the " typical Englishman," the natural aristocrat, who was the father of the great Democracy.

Thoughtful observers will tell you that President Coolidge is predestined to a niche not far removed. from that of Abe Lincoln. When I hear this I like to think that Calvin Coolidge's first action after being invested with powers transcending all others in our modern world was to spend five minutes, alone, bareheaded, at his mother's grave.

Yes, it is well that the Fifth Commandment is held in honour in America.. It is also well, since we are assured that it is the " first Commandment with promise." Seen from that angle, the little Gothic chapel at Valley Forge does not merely represent a fine patriotic " gesture " ; it is fraught with hope, for it means that the standards set by the " typical Englishman " a century ago are still the avowed ideals of the race on whom must devolve in no small measure the future shaping of our much battered