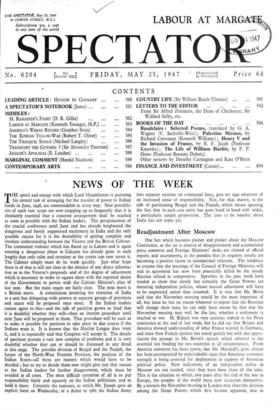 THE speed and energy with which Lord Mountbatten is pursuing his central task of arranging for the transfer of power to Indian hands in June, 1948, are commendable in every way. New possibili- ties of such vast scope are now cropping up so frequently that it is absolutely essential that a concrete arrangement shall be reached as soon as possible with the Indian leaders. The postponement of the crucial conference until June 2nd has already heightened the dangerous and barely suppressed excitement in India and the only possible excuse for it is the desirability of getting complete and absolute understanding between the Viceroy and the British Cabinet. The communal violence which has flared up in Lahore and is again entering a dangerous phase in Calcutta has already gone to such lengths that only calm and certainty at the centre can now arrest it. The Cabinet simply must do its work quickly. Just what hope there is of that is still not clear in the absence of any direct informa- tion as to the Viceroy's proposals and of the degree of adjustment which is necessary in order to square them with the reported desire of the Government to persist with the Cabinet Mission's plan of last year. But the main stages are fairly clear. The next move is a British move. A constitution involving the retention of India as a unit but delegating wide powers to separate groups of provinces and states will be proposed once more. If the Indian leaders cannot agree to this—and the talk of partition grows so loud that it is doubtful whether they will—then an interim procedure until next June will be proposed to them. That procedure will be such as to make it possible for partition to take place in due course if the Indians want it. It is known that the Muslim League does want it, and it is repeatedly said that Congress will accept it. The details of partition present a vast new complex of problems and it is very doubtful whether they can or should be discussed in any detail at this stage. The possible division of Bengal and the Punjab, the future of the North-West Frontier Province, the position of the Indian States—all these are matters which would have to be decided ; but to try to decide them now might give just that excuse to the Indian leaders for further disagreement, which must be avoided at all costs. The nfost difficult operation of all is to put responsibility fairly and squarely on the Indian, politicians and to hold it there. Certainly the rumours, to which Mr. Jinnah gave an explicit form on Wednesday, of a desire to split the Indian Army

into separate sections on communal lines, give no sign whatever of an increased sense of responsibility. Nor, for that matter, is the talk of partitioning Bengal and the Punjab, which means ignoring the fact that in each case unity has gone hand in hand with order, a particularly simple proposition. The time to be hopeful about India has not come yet.