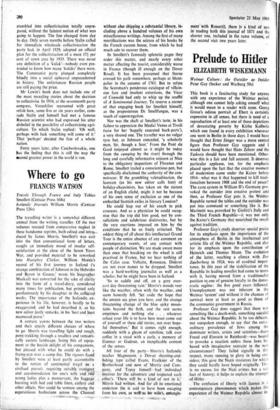 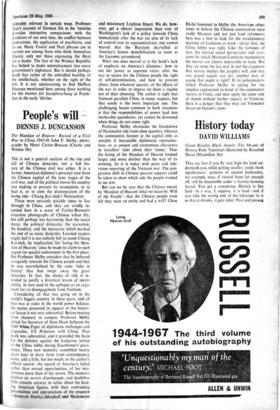 This book is a fascinating study for anyone with any experience of the Weimar period, although one cannot help asking oneself what it would mean to a reader with none. Georg Grosz's odious portrait of Ebert is certainly expressive in all senses, but there is need of a reproduction of at least one of those depictions of devastating poverty by Kathe Kollwitz which one found in every exhibition wherever one went in Berlin in those days. I would have thought that Ernst Ringer was a more central figure than Professor Gay suggests and I would have thought that Hans Zehrer and the Tatkreis should have been mentioned. Other- wise this is a fair and full account. It deserves particular applause, too, for the emphasis placed upon the fact that the creative moment of modernism came under the Kaiser before I914—what was it that happened to kill tradi- tionalism between 1908 and the end of peace? The caste system in William H's Germany pro- voked the outsider into creative prOtest and then, as Professor Gay puts it, the Weiniar Republic turned the tables and the outsider was put into command or something like it. But Marinetti was provoked by Giolitti's Italy and the Third French Republic—it was not only the Kaiser's Germany that nourished the revolt against tradition.

Professor. gay's, study deserv,es special praise for ,its emphasis ,upon the importance of the atmosphere of, Berlin_ in the intellectual and artistic life of the Weimar Republic, and also for its emphasis upon the contribution of Heinrich and Thomas Mann. The evolution of the latter, reaching a climax with. Der Zauberberg in 1924, was of cardinal impor- tance. In this year of the stabilisation of the Republic its leading novelist had come to terms with it, having moved from a traditionalist position to one of genuine loyalty to the demo- cratic repine: the five good years followed. Unemployment was not inherent in the Weimar 'system' and without it the chances of survival were at least as good as those of the communist government in Russia. Professor Gay does suggest that there was something like a death-wish, something suicidal about the Weimar Republic. Is he too delicate, not outspoken enough, to say that the extra- ordinary prevalence of Jews anapng the dominant writers, artists and scientists—from Freud and Einstein to Reinhardt—was bound to provoke a reaction unless those Jews be- haved with imaginative restraint in the new circumstances? They failed signally in this respect, many seeming to glory in being out- siders; this gave the Nazis resources for which they could hardly have hoped originally. Thi' is no excuse for the Nazi crimes but a sad fact of history; it helps to explain the triumph of Hitler.

tolerably relevant in certain ways. Professor Gay's account of German life in the 'twenties provides instructive comparisons with the problems of our own time, the conflict between generations, the application of psychiatry, and so on. Many Fascist and Nazi phrases are in current use among those who think themselves Maoist, only not those expressing the thirst for a leader. The fate of the Weimar Republic has helped to make unemployment into every government's nightmare. But it should perhaps teach fear rather of the unbridled hostility of the intellectuals, whether on the right or the left. It is not uninteresting to find Heitert Marcuse mentioned here among those working for the Institut fur Sozialforschung at Frank- furt in the early 'thirties.