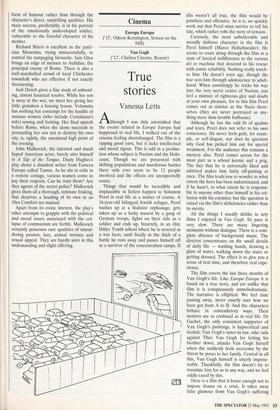 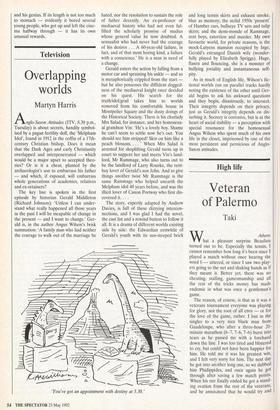 Athough I was duly astonished that the events related in Europa Europa had happened in real life, I walked out of the cinema feeling shortchanged. The film is a ripping good yarn, but it lacks intellectual and moral rigour. This is odd in a produc- tion whose subject is Nazism and the Holo- caust. Though we are presented with shifting populations and murderous battles there only ever seem to be 12 people involved and the effects are unexpectedly comic.

Things that would be incredible and implausible in fiction happen to Solomon Perel in real life as a matter of course. A 16-year-old bilingual Jewish refugee, Perel washes up at a Stalinist orphanage, gets taken up as a lucky mascot by a gang of German troops, fights on their side as a soldier and ends up, bizarrely, in an elite Hitler Youth school where he is revered as a war hero, until finally in the thick of a battle he runs away and passes himself off as a survivor of the concentration camps. If this weren't all true, the film would be pointless and offensive. As it is, we quickly work out that Perel must survive to tell his tale, which rather robs the story of tension.

Curiously, the most unbelievable and morally dubious character in the film is Perel himself (Marco Hofschneider). He seems to coast along through the film in a state of farcical indifference to the various dei ex machina that descend to his rescue with comic reliability. Nothing really touch- es him. He doesn't even age, though the war sees him through adolescence to adult- hood. When unwittingly he tricks his way into the very nerve centre of Nazism, you feel a mixture of righteous glee and doubt at your own pleasure, for in this film Perel comes out as sinister as the Nazis them- selves (they are never portrayed as any- thing more than lovable buffoons).

Although he has the odd fit of qualms and tears, Perel does not refer to his own conscience. He never feels guilt, for exam- ple, or self-disgust, nor does he question why God has picked him out for special treatment. For the audience this remains a mystery also. Perel comes across for the most part as a school keenie and a prig. The fact that he is universally liked and admired makes him fairly off-putting at once. The film leads you to wonder to what extent the hero has been indoctrinated, and if he hasn't, to what extent he is responsi- ble to anyone other than himself in his col- lusion with his enemies; but the question is raised via the film's deficiencies rather than its merits.

All the things I usually dislike in arty films I enjoyed in Van Gogh. Its pace is very slow. There are many lingering moments without dialogue. There is a com- plete absence of background music. The director concentrates on the small details of daily life — washing hands, drawing a glass of water, walking down the stairs or getting dressed. The effect is to give you a sense of real time, and therefore real expe- rience.

The film covers the last three months of Van Gogh's life. Like Europa Europa it is

based on a true story, and yet unlike that film it is conspicuously unmelodramatic. The narrative is elliptical. We feel time passing away, never exactly sure how we have got from A to B. And the characters behave in contradictory ways. Their motives are as confused as in real life. Dr Gachet, the only consistent supporter of Van Gogh's paintings, is hypocritical and foolish; Van Gogh's sister-in-law, who rails against Theo Van Gogh for letting his brother down, attacks Van Gogh herself when she suddenly feels overcome by the threat he poses to her family. Central in all this, Van Gogh himself is utterly impene- trable. Thankfully, the film doesn't try to translate him for us in any way, and we feel oddly eased by this.

Here is a film that is brave enough not to impose drama on a crisis. It takes away false glamour from Van Gogh's suffering

and his genius. If its length is not too much to stomach — evidently it bored several young people, who got up and left the cine- ma halfway through — it has its own unusual rewards.